Or “How an Intelligent Design Theorist was Bested in a Public Math Competition by a Genetic Algorithm!”

This Online Extra is a follow-up to the article “War of the Weasels” from the May/June 2010 issue of the Skeptical Inquirer (Volume 34.3, May/June 2010). The print article discusses the use of a genetic algorithm (GA) to solve tricky math problems and demonstrates that no specific “target” is required for such algorithms, contra the interminable creationist attacks on the “Weasel” simulation discussed in Richard Dawkins’s book The Blind Watchmaker. The problem I developed the GA for is called Steiner’s Problem; it involves finding the shortest straight-line-segment networks connecting an array of given fixed points. This problem provides a miniature digital playground on the very edge of complexity.

I first became interested in Steiner networks because of their connection to minimal surfaces and to physical analogs like soap films. These are useful in some minimization problems because surface tension in the soap films acts to minimize the total area of film. This property allows Steiner network problems to be solved directly with soap films. First, two parallel clear plates are connected by posts that represent the nodes or “cities” of the problem. Then, the assembly is dipped into a solution of soapy water and then carefully withdrawn to produce the Steiner solution (one hopes).

(Hover over images for more detail) 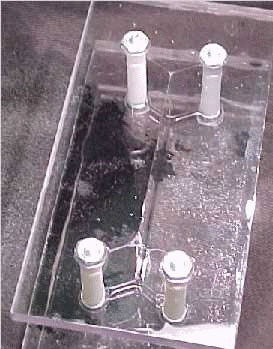 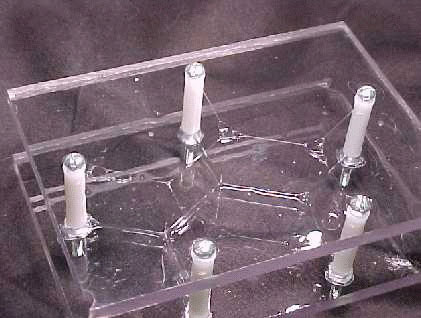 It wasn’t until I started investigating whether some of the MacGyver solutions could also be realized with soap films that things really got interesting. I quickly found that several of the configurations that evolved from the genetic algorithm could also be obtained with soap films, simply by pulling the parallel plates out of the soap solution at angles other than horizontal. A soap film incarnation of one of the MacGyver shapes appears below. 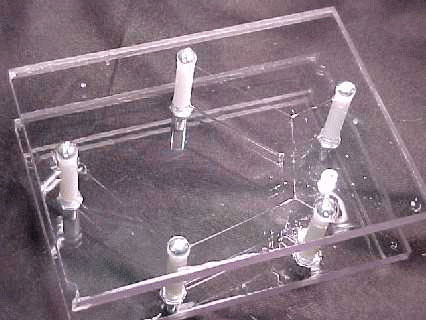 Not all of the MacGyvers could be obtained with soap films, however. The shape below, which I named the “Face Plant,” features four segments meeting at a common point. While this presents no problem for DNA representations of solutions, it is almost impossible in real soap films, as the junction of four films is invariably a very unstable equilibrium. In soap films, such junctions of four segments will quickly resolve into a bow-tie shape as typified in the solution to a simple four-node Steiner system. The Face Plant turned out to be a MacGyver solution that could easily exist in the genetic algorithm but could not be realized with minimal-surface soap films.

Figure 4. The “Face Plant”: a viable genetic algorithm solution for a five-node system.

As if that wasn’t strange enough, I soon stumbled on the “Doggie”—a stable soap film configuration that never appeared during the genetic algorithms simulations. Even the formal (but topologically tricky) Steiner solution popped out one of two hundred runs on average—why did the Doggie never appear? 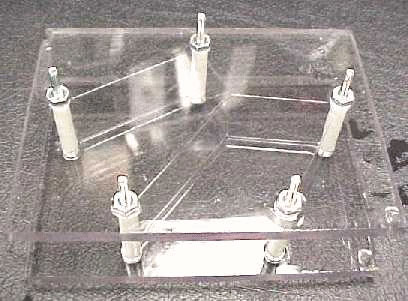 Figure 5. The “Doggie”: A viable soap film solution for a five-node system.

After several frustrated attempts at Doggie evolution, I decided to go ahead and do what Dembski implies I am doing for all such shapes—deliberately perform some “genetic engineering” to “front-load” the system with a specified solution. Accordingly, I deduced the DNA configuration for a typical Doggie and forced this particular organism to be present as one individual of the very first generation of a simulation.

Figure 6. The “Doggie”: a nonviable genetic algorithm solution for a five-node system.

Sure enough, the Doggie was much more fit than most members of the initial (random) population and persisted for several generations. However, at 150 to 200 units longer than all of the MacGyver solutions, it was quickly out-competed and forced to extinction by such fitter solutions. After a dozen generations or so, the Doggie was simply wiped out by the competition.

Had I actually been feeding the proper Steiner solution into the algorithm—“front-loading” in Dembski’s parlance—it would have always triumphed, and I would never have found the bizarre and wonderful world of MacGyver also-rans. The same boring result would also have been obtained had I defined “fitness” as deviation from a single, specific “target”—the proper Steiner solution itself. Either way, I wouldn’t have found that some (but not all) of these new structures could be realized with soap films, and I wouldn’t have found that some stable soap film configurations are far longer than the minimum possible and are not retained in evolutionary algorithms. As I said, I have never been as astonished at the unexpected output of one of my digital programs.

As the ID community flailed about trying to answer the Design Challenge, reader Sam Garret commented, “Can’t they just figure it out with soap bubbles? Assuming they can remember the way to the lab, of course.” Alas, such was not the case.

The “War of the Weasels” on the Web: http://pandasthumb.org/archives/evolution/evomath

Dave Thomas, a physicist and mathematician, is president of New Mexicans for Science and Reason and a fellow of the Committee for Skeptical Inquiry. He is currently a scientist/programmer at IRIS/PASSCAL in Socorro, New Mexico, and also teaches classes in physics, psychology, and critical thinking at New Mexico Tech.

Review of “Evolution: How We and All Living Things Came to Be” by Daniel Loxton

The War of the Weasels

Why Our Brains Believe/The Winter of Our Discontent

Keep Libel Out of Science

Did a Cosmic Impact Kill the Mammoths?

Abductions or Hoaxes? The Man Who Attracts Aliens

How to Test a Miracle