Called “the Lourdes of America” (after the famous French healing shrine), El Santuariò de Chimayó in New Mexico is a place of pilgrimages. Scores visit the
little adobe church daily, while thousands walk miles to worship there on Good Friday. Some carry heavy crosses, while others approach on their knees. Many
come seeking a cure for their afflictions, scooping from a small pit in the church floor a reddish soil that they rub on afflicted areas of their bodies or
even sprinkle on their food or brew in tea (Eckholm 2008). (Figure 1.) 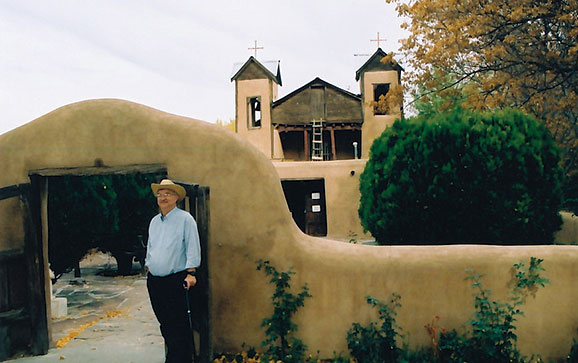 Figure 1. The author, in the persona of a pilgrim, visits the famous “Lourdes of America,” where holy dirt supposedly effects miracle cures. (Author’s photo by Vaughn Rees)

The word Chimayó derives from hot springs that were sacred to the Tewa Indians (a linguistic group of Pueblos) who called them Tsimajopokwi (pokwì in Tewa means “pool of water”). After the springs dried up, the name was shortened to Tsimayo (Nealson 2001, 62). According to a
pious legend (of which there are many versions), brethren from the secret Penitente Brother­hood were engaging in rites on a nearby hill on a dark Good
Friday in 1810 when one saw a mysterious light coming from the valley. Investigating and finding a half-buried crucifix, the men sent for a priest, the
nearest church being ten miles away in Santa Cruz. The priest had the wooden crucifix carried in a procession to his church, but by the next morning it had
disappeared—having been miraculously re­turned to its original site! This removal and return occurred two more times before people understood the message:
the crucifix was to remain on the spot, which had reportedly been a sacred area for the Pueblo Indians (Eckholm 2008).

This grafting of a Roman Catholic element onto a native one—a process called syncretism—was common. It was often similarly accomplished by the
shrewd use of a “miracle.” (For example, a “miraculous,” actually tempera-painted, image of the Virgin of Guada­lupe appeared in Mexico City in 1531 to
prompt the building of a Catholic shrine—on a hill where the conquered Aztecs had had a temple to their virgin goddess, Tonantzin [Nickell 1988;
2004].)

One of the Penitente brothers, Don Bernardo Abeyta, built a small hermita (shelter) onto his house to enshrine the miracle crucifix. The hermita also allegedly “covered a hole from which came a blessed dirt that cured all ailments” (Kay 1987, 35). Abeyta himself was “instantly
healed” of an undisclosed illness (Kutz 1988, 46–47). Alternately, Indian stories from the twentieth century suggested that a Tewa pueblo had once stood on
the spot next to a pool whose mud had healing properties (Harring­ton 1916, 342). Revealingly, the chapel’s full name (El Santuariò de Chimayó de Nuestro
Señor de Esqui­pulas) evokes a shrine in Guate­mala that had long been venerated for its miraculous healing crucifix and surrounding earth with curative
powers. As well, there are much-touted healing mud baths at Chilca, Peru (which I visited with a guide in 2006). In any event, in 1816 a chapel was
completed on the Chimayó site by Father Fran­cisco de Otocio, who was in charge of all New Mexico missions (Kay 1987, 29–37; Eckholm 2008).

The Nitty Gritty on the Dirt

Today, pilgrims visiting El Santuariò de Chimayó stoop to enter a small, single-windowed room that is said to be Abeyta’s original hermita. The
central hole, El Posito (“little well”), measures some sixteen to eighteen inches wide and less than nine inches deep. Con­sider­ing the great
amount of earth that must have been scooped from it during its almost two centuries of history, however, this is a small hole indeed! Hence, there grew a
pious legend “that the pit was refilled by divine intervention” (Eckholm 2008). (This was similar to the claim that regardless of how many pieces were
taken from the True Cross, the alleged holy relic of Jesus’s Crucifixion, it never diminished in size [Nickell 2007, 91–92].)

But even though “legend still maintains that the hole miraculously replenishes itself,” in fact “priests periodically refill the hole with dirt from
outside the church” (Kay 1987, 77). Indeed, previously tipped off to this fact by a television cameraman (Del Monte 2001), we searched for and found the
storage area where five-gallon containers of the reddish soil are stored (Figure 2). In recent years, priests at El Santuario de Chimayó have increasingly
taken pains to point out the shed where the trucked-in soil is stored, with one complaining, “I even have to buy clean dirt!” (Eckholm 2008). 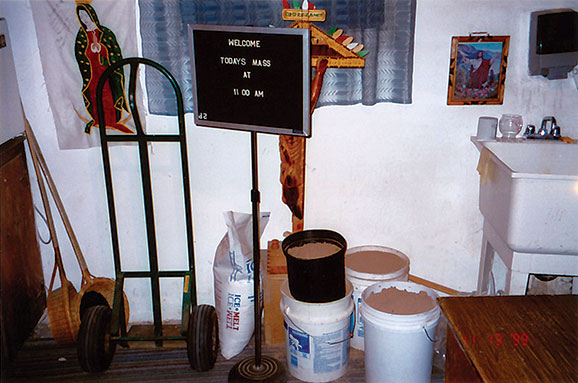 Figure 2. Despite a legend that the dirt, scooped from a small hole in the church floor, replenishes itself, it is actually purchased from outside and kept in a storeroom until it’s time to refill the hole. (Author’s photo)

In fact, the “holy dirt” is nothing very special. An analysis conducted for The Miracle Detectives television series identified the presence of
carbonates that might have a beneficial effect on heartburn by neutralizing excess acid. “Beyond that,” stated series co-star Indre Vìskontas, the show’s
skeptic, “there doesn’t seem to be anything out of the ordinary” (Miracle Detectives 2011).

I agree. I had collected my own samples for testing on a visit to Chi­mayó in 2003 with investigator Vaughn Rees. In the guise of a pilgrim needing healing
(again see Figure 1), I obtained a small plastic container from the gift shop, sold empty but labeled “Blessed Dirt.” My examination, in my little lab at
CSI headquarters, showed that the “dirt” contains no appreciable humus but is largely sand, consisting of tiny grains of minerals and small bits of rock.
(Appli­ca­tion of hydrochloric acid yielded a strong effervescence that confirmed the presence of carbonates. The addition of potassium ferrocyanide
reagent produced a Prussian-blue reaction that identified a significant amount of iron, consistent with its color of red ocher, an earthy iron oxide.
Stereomicroscopic examination showed grains of such common minerals as crystalline quartz and mica, as well as small lumps of sandstone and occasional bits
of organic material, including tiny fragments of bone and fine root stems.1)

Chimayó priest Father Jim Suntum concedes that the dirt itself has no miraculous power (Miracle Detectives 2011). In fact, the local dirt has
actually acted in a very anti-miraculous way: it has posed a threat to the church’s artworks. As conservators found in 2003–2004, they “had to deal with
the dirt.” Indeed, “It had drifted down from the ceiling and walls in the almost 200 years the church had existed, covering the paintings on the five altar
screens, the crucifix and the carved bultos [sculptures] with a fine dust that needed cleaning. Dirt also had fallen behind the main altar screen
to push it out of joint and threaten its very existence.” Still, a writer would claim that the preservation process itself, at least, was “almost a
miracle” (Russell 2004, 36, 40).

Nevertheless, while Father Suntum concedes it is not the holy dirt that heals but rather one’s “relationship with God,” he insists: “Something happens in
this place.” However, he admits: “We can’t quantify it. We can’t document it. We do ask people to tell their story” (Miracle Detectives 2011). In
fact, “officially, the Church has never investigated any of the claims” (El Santuariò … 1994, 26).

The complete lack of records re­garding alleged miraculous experiences means that claims are entirely dependent on anecdotal evidence, such as the
unverifiable stories told by an aging priest at the site. For example, in the mid-1950s, he recalled, a man carried his frail, ill mother into the church.
“A few minutes later,” said the priest, “he called me, something has happened. She was kneeling in front of the altar. She was talking and full of health”
(Hamm 2006, 42, 45). Yet we do not need to invoke the miraculous to explain what may have been only a simple rejuvenation of the woman’s spirits.

Or consider the tale about a girl from Texas whose family “was told she had little time to live” and that even an operation might not save her. Follow­ing
their visit to Chimayó the child was well and no operation was necessary. “Two days later,” recalls the old priest, “they came back to thank God for the
cure” (qtd. in Hamm 2006, 45). Now, we cannot prove this story is untrue, but fortunately we do not have to. The tellers of such unverifiable tales have
the entire burden of proof.

However, when such cases can be investigated, they are invariably illuminating. For instance, The Miracle Detec­tives examined the case of a
Colo­rado woman, Deseree “Dese” Mar­tinez, who claims the dirt of Chimayó helped her cancer go into remission. Diagnosed at the age of fifteen with
aggressive bone cancer at numerous sites in her body, she visited Chimayó where she mixed the holy dirt with spit and applied it to a sore spot on her leg.
The pain was gone by the next morning, and scans the following week showed the area healed. Inexplicably, she did not then rub dirt on the other lesion
spots, but they soon disappeared too.

However, the woman’s doctor, Brian Greffe, at The Children’s Hospital in Denver, observed that with such non-Hodgkin’s Lymphoma in pediatric cases, the
hospital’s “cure rates are quite high.” He attributed Martinez’s success to the chemo treatments, which had worked “within days” of their be­ginning.
Obviously, there is no evidence that the interim application of holy dirt to a single site had any effect, although Greffe did say Martinez’s positive
outlook and the support of her family were helpful (Miracle Detectives 2011).

As invariably shown by the evidence, so-called miraculous healings are never scientifically verified. Such claims, like those at Lourdes, the most famous
“miracle” shrine, are derived from cases that are supposedly “medically inexplicable”; therefore, they are really examples of a logical fallacy called
“arguing from ignorance”—that is, drawing a conclusion from a lack of knowledge. Besides, some illnesses are known to exhibit spontaneous remission, and
other reputed cures may be attributable to a host of other factors: misdiagnosis, psychosomatic conditions, the body’s own healing mechanisms, and the
like, including—as in the case of Martinez—prior medical treatment (Nickell 2008).

While the church displays crutches and canes—ostensibly cast off after previous cures—they may well have been discarded prematurely. Persons may feel
better temporarily after experiencing the hope and excitement of a pilgrimage. Writer Anatole France, on visiting Lourdes and seeing the abandoned canes
and crutches there, sagely remarked, “What, what, no wooden legs???” (qtd. in Hines 1988, 250).

As the evidence shows, therefore, claims made for holy dirt at Chimayó are unwarranted. Despite borrowed and contrived legends that the site is miraculous,
the soil is actually an ordinary variety trucked in from elsewhere and merely blessed. Priests admit that the “something” that happens at the site cannot
be quantified or documented—and indeed a major healing claim fell apart on investigation.

One suspects that the “something” is merely what is termed confirmation bias—the willingness to credit any supposed benefits while ignoring countless
failures. One writer offers the apologetic, “It is a mystery why certain people and situations are granted a miracle and others are not” (Hamm 2006). But
it is only a “mystery” if one chooses to be blind to the evidence.

1. Finally, I ran a battery of standard analyses using a commercial soil-test kit determining the pH was 7.0 (neutral), and that nitrogen, phosphorous, and
potash were at insignificant levels.

Eckholm, Eric. 2008. A pastor begs to differ with flock on miracles. The New York Times (February 20).

Can We Have Civilized Conversations about Touchy Science Policy Issues?

In Memory of a Most Remarkable Man

The Modern Skeptical Movement Would Not Exist without Him

Exuberant Champion of the New Enlightenment

Paul Kurtz and the Virtue of Skepticism

A Powerful and Thoughtful Voice for Skepticism and Humanism

Book of Seasons: An Elegy, for Paul Kurtz