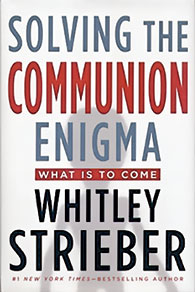 Here we go again. Whitley Strie­ber, author of numerous best-selling books of fiction, horror, and some that defy categorization, spins a few more yarns as
he re-hashes some familiar old ones. In his best-selling books Communion (1987) and Transfor­mation (1988), Strieber claims to have
experienced inexplicable en­counters—including an infamous one involving an anal probe—with “the visitors.” Though they seem to be extraterrestrials,
Strie­ber claims not to know who—or what—the visitors really are. His latest book, Solving the Communion Enigma: What Is to Come, picks up where
these other tales leave off in an effort to provide a solution to their unbelievable, though familiar, otherworldly mysteries. It is not those who’ve
experienced such encounters who are delusional, says Strieber—it’s those who deny the truth of them. So if you doubt that Strieber was stalked in New York
and Texas by “a sinister chain-smoking dwarf” who was apparently able to climb walls but could not be photo­graphed, you are probably delusional.

Strieber’s attempt to bolster his message with the help of prestigious intellectuals and authors separates Solving the Communion Enigma from the
author’s previous Whitley-isms. Jeffrey J. Kripal, Chair of Religious Studies at Rice University, writes in his foreword to the book that Strieber
understands that “we sit on an intellectual precipice, that a ‘new world’ is just over the horizon, that science and its clunky methods are not going to
get us there…. Only the future can finally read a great book like Communion.” Someone of Kripal’s credentials should know better than to
write something like that. Strieber also calls upon the UFO writings of authors such as Leslie Kean, Jacques Vallee, John Mack, Paul Hill, and Kenneth
Ring—the latter two of whom provide a suitably esoteric and obscure complement to Strieber’s own homespun wisdom.

But take away the pretension and the same old Whitley emerges from this book, describing his latest hair-raising scrapes with the paranormal. One rainy
night, Strieber awoke to find himself experiencing “the consciousness of a number of different Whitleys” who exist, apparently, “in different parallel
universes.” Another night, he awoke and “found myself to be invisible. I had no body…. A cold uneasiness went through me. Where was my body?”
Fortunately, he located his missing body nearby. At breakfast the next morning, his son and the son’s friend chirped about how “Whitley came down through
the ceiling last night!”

Perhaps the most extraordinary claim in the entire book, though, is Strieber’s repeated claim of poverty. He laments that in the early 1990s he ran out of
money and could no longer afford either his Upstate New York cabin or his New York City apartment: “In August of 1994, we ceased to be able to pay our
mortgage.” He moved his family to the small, modest condominium they owned in San Antonio, Texas. Yet Strieber’s New York Times best sellers must
have brought him more money in a few years than the average person could hope to see in a lifetime. How could he possibly have spent so much money so
quickly, especially since none of his writing indicates the author’s extravagant lifestyle?

So, what solutions to “the Com­munion Enigma” does the book offer? Sadly, none—although Strieber does suggest that “one thing our visitors are doing is
creating situations that are designed to increase our left-brain functioning.” He views this as a hopeful conclusion since “nobody who is trying to improve
our brain function is interested in our death.” In fact, Strieber “began to see, more and more, that the dead were involved with our supposed alien
visitors, and through them with us…. I have seen the joy of the dead, but I have also seen their suffering.” (See my review of Strieber’s earlier book The Key, “He Sees Dead People,” SI, July/August 2011). Toward the end of the book he warns, “Mankind is going to die, one way or another, to the
world that we know now. But, at the same time, mankind is going to be born—literally born again.”

According to the website for his book Hybrids, the Striebers now have residences in New York, Texas, and California—which means, I’m sure, that the visitors will provide Whitley Strieber with many
more profitable adventures before he ever solves his “enigma.”

Can We Have Civilized Conversations about Touchy Science Policy Issues?

In Memory of a Most Remarkable Man

The Modern Skeptical Movement Would Not Exist without Him

Exuberant Champion of the New Enlightenment

Paul Kurtz and the Virtue of Skepticism

A Powerful and Thoughtful Voice for Skepticism and Humanism

Book of Seasons: An Elegy, for Paul Kurtz