Medusa’s Gaze and Vampire’s Bite: The Science of Monsters 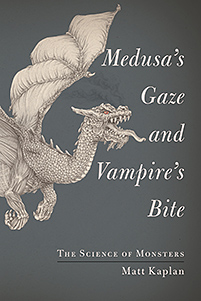 The intent of Medusa’s Gaze and Vampire’s Bite is to provide scientific explanations for various monsters found in historical legend and literature
up through the monsters of today as seen, mostly, in film. Had Kaplan succeeded in this task, he would have produced an exciting and interesting book.
Instead, the book is filled with over-explanations, just-so stories, and college-level film criticism, all leavened by one howling error.

The topics covered are arranged in rough chronological order. Thus, the first half of the book deals with monsters from ancient myths and legends such as
the Nemean lion, chimeras, the Minotaur, Medusa, Charybdis, and the like. But modern monsters are tossed in too—King Kong and the giant squid (the latter
doesn’t really belong since it does exist).

The explanations for ancient beasts are often fairly reasonable. For example, monsters that are giant versions of already scary animals are scary because,
well, a giant version of something already scary (e.g., a lion) is even scarier. Snakelike monsters are scary because snakes are scary in the first place.
Why do snakes, to this day, generate fear? Kaplan argues, convincingly, that the fear of snakes is part of human’s evolutionary heritage. They posed real
danger as proto-humans evolved. So there is an advantage to avoiding snakes even if one has not had a direct scary experience with them.

Kaplan does occasionally go overboard by trying to come up with a specific explanation for every little variation in a myth. For example, on pages 54 and
55 there is a discussion of the possible factual basis of the “cruel bellowing” of the Minotaur. There is much discussion of caves and other geologic
phenomena. But isn’t it just simpler to explain the details of this, and other, myths as devices to make them scarier? Or, as Amazon reviewer sonabeta
pointed out in a November 20, 2012, review, “People sometimes just make things up.”

Similarly, on page 102 the discussion turns to dragons. The question is why dragon myths are not consistent across time and place—some with wings and some
without, some breathing fire and some not. Well, dragons aren’t real so why should all stories about them be consistent? Still, Kaplan’s explanation for
the fire-breathing part is plausible and I won’t spoil it for the reader by giving it away here.

Chapter 6 on “Hauntings—Demons, Ghosts, Spirits” is long on description of these phenomena and short on explanations. Hypnogogic and hypnopompic
hallucinations go unmentioned, although there is a brief discussion of sleep atonia and sleep paralysis. But the full power of hypnogogia—with all of its
attendant hallucinations—to convince people that ghosts are real is not made clear at all. This is a serious omission.

The book does contain one major and inexcusable howler in Chapter 7, a chapter dealing with vampires, zombies, and werewolves. Kaplan swallows hook, line,
and sinker the long-refuted claim of Wade Davis that zombies are real and that they can be created by witch doctors using the poison tetrodotoxin (TTX),
found, among other places, in the skin and internal organs of puffer fish native to Haiti. In accepting Davis’s claims Kaplan ignores the overwhelming
scientific literature that shows that 1) the “zombie powder” that Davis claims had TTX in it didn’t and 2) even if it did, TTX in any quantity cannot
produce zombies. TTX is a nerve poison that does not get into the brain. In terms of motor control, it affects only the skeletal musculature. Its specific
effect is to render victims paralyzed, but it is not the stiff (rigid) paralysis of zombie legend but a flaccid paralysis where muscles lose their tone. In
addition, in nonlethal doses TTX causes nausea and vomiting. The idea that just the right dose of TTX could transform a person into a zombie and keep them
that way while they were walking around being productive slaves is absurd. And its absurdity has been known since the late 1980s. Sadly, Kaplan obviously
didn’t get the memo. For a more detailed discussion with appropriate references, see my article “Zombies and Tetrodotoxin” in the May/June 2008 Skeptical
Inquirer (vol. 32, no. 3, pp. 60–62).

The last few chapters change focus from creatures of ancient myth and legend to more recent creations, especially alien abductions and movie monsters. The
discussions here are quite poor, almost sophomoric, especially where movie monsters are concerned. The first topic in Chapter 8, “The Created,” is the
golem. Here either through bad writing or ignorance (or maybe both) Kaplan seems to state that there was only one golem, in Prague, and the whole golem
legend dates only from 1909. In fact, there is ample evidence that the golem legend is much, much older. The New Standard Jewish Encyclopedia
(Facts on File, 1992) notes that the legend dates from at least the fifteenth century. The Jewish Encyclopedia, vol. 6 (Ktav Publishing, 1964,
reprint of the 1901–1906 edition) states that “In the Middle Ages arose the belief in the possibility of infusing life into a clay or wooden figure of a
human being, which figure was termed a ‘golem’ by writers of the eighteenth century” (p. 37). Sadly, missing from this chapter is any discussion of that
most modern of mythical creatures, the chupacabra. The creation of the myth of this creature was ably told by Ben Radford in his 2011 book Tracking the Chupacabra.

Chapter 9 is devoted to “Terror Resurrected—Dinosaurs.” Here Kaplan discusses the recreation of our old thunder lizard friends in the movies and the
possibility for real recreation through use of dinosaur DNA, which, of course, is the theme of the movie Jurassic Park. The discussions of both
the film and dinosaur DNA leave much to be desired. Kaplan’s critique of the problems with using DNA to recreate a dinosaur does not come close to that of
Desalle and Lindley in their 1997 book Science of Jurassic Park. Kaplan does nicely discuss the problems of recreating a species that would find
itself without its natural ecosystem to live in and would thus be confined to some sort of enclosures. However, even here he stumbles by an embarrassing
acceptance of the characterization of chaos theory taken directly from the movie—a characterization that is typical Hollywood fantasy. In the film the
character Dr. Ian Malcolm (played by Jeff Goldblum) says that chaos theory means that “biological systems are uncontrollable by [their] nature and
therefore inherently threatening” (p. 187). Thus, no matter what protective measures are taken, any recreated dinosaurs will break free and terrorize the
world. Or at least the local natives. This is Hollywood nonsense. It bears about as much relationship to actual chaos theory as the view of quantum
mechanics espoused by New Age proponents does to actual quantum mechanics. In fact, chaos theory deals with systems in which tiny changes in initial
conditions can have very large effects on the state of these systems at later times. The theory does not allow the impossible to happen or even predict
that the very unlikely will.

The final chapter, “Extraterrestrial Threat—Aliens,” suffers from much the same problem as the section on ghosts: long on description but short on
explanation. The chapter starts with a description of the Betty and Barney Hill abduction case. It then states that: “Countless tales of abductions and
bizarre sightings followed” (p. 198). Kaplan then asks why aliens are visiting Earth but not being detected by “all the space scanning technology that has
been developed during the past decades” (p. 199). His answer? “It is an enigma.” No, it’s not, as even a slight familiarity with the skeptical literature
on UFOs and alien abduction would have made clear. The rest of the chapter wanders in sort of a haze through various alien-themed science-fiction movies,
including an interesting digression on parasites and how they can change animal behavior. And then it stops. It doesn’t end. It just stops.

Perhaps this review should just stop as well. In summary, the book does contain a few interesting insights into the factual backgrounds of several
legendary creatures. But in general it is poorly researched and written. Is it good enough for me to recommend that my university library purchase a copy?
No. I make the same recommendation for the readers of this review.