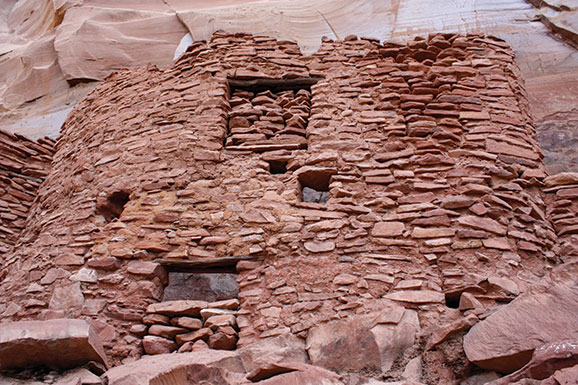 A dwelling of the ancient Sinagua people in the Coconino National Forest.

The Palatki site is located in the Coconino National Forest, just west of Sedona, Arizona. In a region where people can visit the massive cliff dwellings of
Mesa Verde, few bother making the trip to this tiny jewel of a place with its swirl of massive red rocks enveloping the living space of the ancient Sinagua
people. Only about fifty or sixty tourists visit the site each day, so at any particular time you have the place pretty much to yourself and the one or two
volunteer docents who monitor it.

As a result, I was more than a little surprised during a recent visit when a tour group approached, huffing and puffing up the trail to the site. I was
even more surprised when one of the people in the group walked up to me as I was admiring one of the beautiful ancient rock art panels and said: “Hey! I
recognize you! You’re an archaeology professor, aren’t you? I’ve seen you on TV.”

Imagine my reaction. I’m six miles up a dirt road in the middle of Arizona, and my television fame precedes me! I replied politely, even enthusiastically,
“Yup. That’s me.” 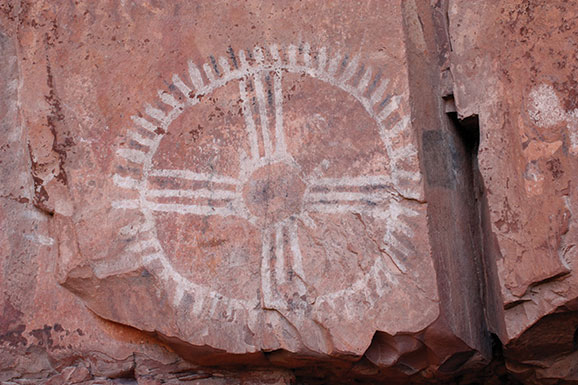 “Wow! How wonderful running into you here. I just saw you on a show about that scientist who believes in ancient astronauts. What’s his name?”

“Do you mean Erich von Däniken?” I asked.

“Well, you really should reconsider your skepticism. After all, there’s some very good evidence for those ancient astronauts visiting earth. First of all,
how do you explain the fact that the Maya had a base-12 number system? Doesn’t that prove that the Maya were an alien race with six fingers on each hand?”

“Okay, base-12, base-20. Whatever. It’s just that the Maya system allowed them to count so high, so much higher than would be necessary for a simple
farming people. It just doesn’t make any sense.”

“Look,” I patiently explained, “the Maya developed an impressive numerical system. So what? The fact that they could count high is in keeping with their
brilliant architectural, artistic, engineering, and calendrical achievements. The Maya were smart. That proves they were, well, smart. That doesn’t prove
they were extraterrestrials.”

“Oh, okay. Well, I just think you need to keep an open mind.”

“My mind is open, always; I just haven’t seen any evidence to support the ancient astronaut hypothesis.”

We shook hands and, grinning, my new friend walked away.

My encounter exemplifies so much of what is wrong about the ancient astronaut belief. Let’s ignore the inconvenient fact that there is ab­solutely no
material, archaeological evidence for it: no laser guns found in neat stratigraphic context next to the bones of woolly mammoths, no light sabers secreted
in Egyptian tombs, and no Star Trek–style communicators reverentially placed in Hopewell burial mounds. There’s another thing just as fundamentally wrong
here: There is no need for a hypothesis of technologically sophisticated aliens dispensing knowledge to ancient human beings.

The archaeological record shows clearly that our human ancestors were enormously intelligent and resourceful. They were more than capable of developing
sophisticated technologies on their own. Rather than exhibiting a pattern of new ideas appearing magically and without antecedents at ancient sites, the
actual record shows lengthy developmental sequences—in the domestication of plants and animals, the evolution of Egyptian pyramids, metallurgy, and so on.
The development of these things didn’t occur overnight; they weren’t “air-lifted” to Earth from another planet. Instead, the stories of these
accomplishments are filled with the very human pattern of trial and error, fits and starts, missteps and leaps forward.

To assume that the achievements of ancient humanity were made possible by visitors from outer space is to grossly underestimate the intelligence and
capabilities of our ancestors and to ignore the enormously fascinating actual archaeological record.

And you don’t need six fingers on each hand to understand that.

This first appeared on the Ohio Archaeology Blog.

Kenneth L. Feder is author of The Encyclopedia of Dubious Archaeology and Frauds, Myths, and Mysteries: Science and Pseudoscience in Archaeology. He is professor of anthropology at Central Connecticut State University and a Committee for Skeptical Inquiry fellow and Skeptical Inquirer consulting editor.