The Pseudoscience Wars: Immanuel Velikovsky and the Birth of the Modern Fringe. 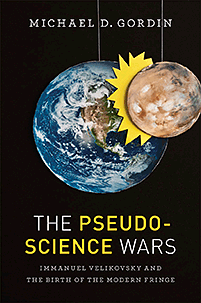 Skeptics often say they are trying to expose pseudoscience, but in reality we tend to use this term loosely. Creationism, homeopathy, al­ternative medicine,
and cold fusion are clearly pseudoscientific, but what about ancient aliens, UFOs, alien abductions, Bigfoot, crystals, the Moon hoax, and many other
claims investigated in the pages of the Skeptical Inquirer? Are these examples of pseudoscience, just bad science, or perhaps not related to science at
all?

One definition of pseudoscience presents it as claims that are presented as scientific but do not adhere to valid scientific method. Another describes
pseudoscience as the misuse of methods that seem scientific in order to undercut real science. In his excellent new book The Pseudoscience Wars: Immanuel Velikovsky and the Birth of the Modern Fringe, Princeton historian Michael D. Gordin asserts that scientists only
apply the label of pseudoscience—which he defines as “doctrines that are non-science but pretend to be, or aspire to be, or are simply mistaken for
scientific”—to ideas that they feel are threatening because of their public appeal. It is the way pseudoscience masquerades as real science and is used to
attack real science that sets it apart from the easily dismissed claims of cranks and charlatans.

No advocate for an unorthodox perspective ever calls his or her work pseudoscience. This is a term of opprobrium, assigned by scientists who are defending
the consensus. Gordin notes that in practice, the term pseudoscience is generally reserved for ideas that are perceived as major challenges to
science—especially in the eyes of the public. Less threatening ideas are simply labeled as bad science or non-science, on the assumption that they will
self-destruct and be quickly forgotten.

Gordin’s highly readable book ex­amines in detail several twentieth-century examples of pseudoscience. Major emphasis is on the pseudocosmologist Immanuel
Velikovsky. His other prime examples are Trofim Lysenko, who nearly destroyed mid-century Russian genetics, and the advocates for Biblical creationism who
attempted to establish a scientific basis for a planet less than ten thousand years old. Lysenkoism was a threat be­cause of the personal support given by
Stalin and the Soviet Communist Party, which virtually outlawed research that challenged Lysenko and thereby had a strong negative impact on Soviet
agriculture. In a sense, Lysenko could be held responsible for the death of millions in the U.S.S.R. The creationist authors who developed “flood geology,”
primarily George McCready Price, Henry Morris, and John Whitcomb, have been (and continue to be) a threat because of support by Christian fundamentalists
who use these ideas to attack evolutionary biology in particular and science in general. Velikovsky is different, in that he achieved substantial fame and
influence on his own merits without the support of any organized religious or political institutions.

Many readers of the Skeptical Inquirer are familiar with the outlines of Velikovsky’s rise and fall. Gordin had access to the complete Velikovsky archives
held by Princeton University, which he used to document many details of this story. He places in context the “Velikovsky affair,” which dealt with the
opposition to his 1950 book Worlds in Collision. One of many controversies he illuminates is the question whether Velikovsky’s book was reviewed
(or refereed) before publication. The fact is that it was reviewed by several scientists who said, in effect, even though it was bunk as science, the book
was still likely to be popular enough that its publication would be a sound business decision.

That is exactly what happened. Scien­tists excoriated the book for its obvious failings, but many non-scientist reviewers lavished praise upon it. This
deep division between the “two cultures” of science and the humanities came as a shock to many scientists. Velikovsky, while of course pleased that his
book rose to the top of the bestseller lists, was also stung by its unanimous condemnation by scientists. He never understood their criticism of planets
rapidly shifting orbits within historic time, and he sought their recognition as a bona fide scholar. He did not do this by publishing papers or
making presentations at scientific conferences, but rather by courting individual scientists—especially his Princeton neighbor Albert Einstein. These
efforts at personal diplomacy were not successful. Scientists immediately recognized that his planetary collisions, and his suggestion that
electromagnetism rather than gravitation dominated planetary motions, were (in Einstein’s terms) “crazy.” Velikovsky was simply not speaking the same
language as the scientific community.

But this is only half the story. It seemed likely that for all the immediate popularity of his book, he would quickly be forgotten. What makes this story
so interesting, what elevates Velikovsky to the rank of true pseudoscientist, was the resurrection of interest in his work during the Vietnam War years,
when he became a darling of the counterculture, gaining support among humanist scholars as well as rebellious students. He was invited to speak on
campuses, conferences were held to discuss his ideas, and his books again ascended the best-seller charts. Precisely because of his rejection by the
scientific community, he became the symbol of the lone scholar defying the conservative establishment.

Gordin also explores the relationships between different pseudoscientists. Superficially, there were striking similarities between Velikovsky and the
creationist positions of Price in The New Geology (1923) and Whitcomb and Morris in The Genesis Flood (1961). All rejected the
uniformitarian geology of their time. All sought to explain many geological features in terms of recent catastrophic events. And both sides sought evidence
to support or verify events in the Old Testament, such as the Noachian flood and the escape of the Israelites from Egypt. Velikovsky began correspondence
with Price in 1951, and he sent the manuscript of his second book, Earth in Upheaval, to Price for his comments. Price replied that “While I have
not always been able to agree with some of the details. I have admired the handsome way in which you have demolished Charles Lyell as well as [Charles
Darwin].” Later in a review, Price described “Earth in Upheaval as one of the most thought-provoking books of modern times.” However, Velikovsky
and the creationists soon fell into dispute. Velikovsky sought naturalistic explanations for the Bible stories, while the creationists preferred direct
attribution to acts of God. In the end, each side ostracized the other and went its own way, not acknowledging any commonality of ideas.

In his final chapter, Gordin turns to the new phase of pseudoscience, practiced by a few rogue scientists themselves. Climate change denialism is the prime
example, where a handful of scientists, allied with an effective PR machine, are publicly challenging the scientific consensus that global warming is real
and is due primarily to human consumption of fossil fuels. Scientists have watched in disbelief that as the evidence for global warming has become ever
more solid, the deniers have been increasingly successful in the public and political arena. One has only to attend a meeting of atmospheric and climate
scientists, such as the December 2012 American Geophysical Union, to appreciate the overwhelming support and increasing sophistication of our understating
of human-caused global warming. At this gathering, thousands of scientists made hundreds of presentations of research results, ranging from the minutia of
modeling the feedback of cloud formation on the greenhouse effect to documenting the incredible rate of loss of Arctic ice. Leaders of the scientific
community made impassioned statements about the threat we face and the necessity for action. Yet outside the halls of science, polls show that half of
Americans deny the reality of climate change, while Senator Jim Inhofe recently announced not only that human induced climate change is a hoax, but also
boasted, “we have won” in the court of public opinion. Today pseudoscience is still with us, and is as dangerous a challenge to science as it ever was in
the past.