Q: Is there any chance you could put my mind at ease and explain why the Social Security Death Index would list [Sandy Hook shooter] Adam Lanza as having died
on December 13, 2012, the day before the Sandy Hook shooting? His mother is listed as dying on December 14. How accurate is the Index? I’m at my wit’s end.
I am sincere in my inquiry. Thank you.

A: I received the above query shortly after a piece I wrote about the Sandy Hook conspiracies received national media attention in early February. For the
week afterward I got dozens of e-mails, many of them hate-filled, accusing me of being part of a government cover-up. I replied briefly to a few of the
more benign ones, ignored the rest, and got back to work. But this e-mail seemed more reasonable, though I was wary of getting mired in spending countless
fruitless hours trying to track down and answer any conspiracy claim I’m asked about. Years of experience have taught me that it’s often a fool’s errand.
Nonetheless, I thought I’d try to give this person a template through which to not only research the question but also understand conspiracy thinking as
well.

I responded to the writer: “I can try to look into the issue for you, but I’ll need more information. To start, where did you confirm that the Social
Security Death Index listed Adam Lanza as having died on December 13, 2012? If you can point me to the verified original source I may be able to help you.”

In response, he sent the following, along with a screenshot of the web page: “I confirmed it myself by searching the index via Ancestry.com. The index is
apparently accessible from any genealogy site. Genealogy Bank seems to be the link everyone is using.” Sure enough, the page had Lanza’s death listed as
December 13, 2012, the day before he attacked the school in Newtown, Connecticut, killing nearly two dozen children and adults. I responded: “To answer
your question, I don’t know. I still would like to see the original coroner’s report (instead of just a screen shot of a website), but I agree that it
appears that the death date is wrong. Without having access to the original death certificate, or knowing who typed what up, my best guess is that it’s a
typo.” 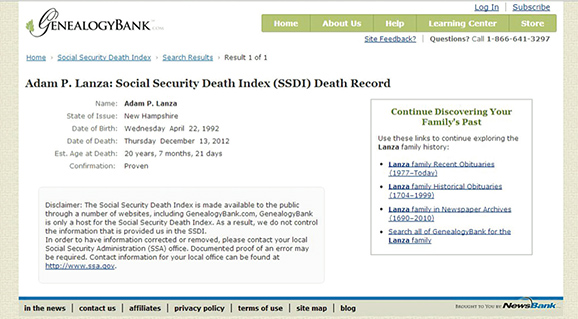 Government employees at the local, state, and federal level are not known for their perfection and accuracy. Just last week a friend of mine was enrolling
his daughter in elementary school and noticed that some government office drone had mistyped his daughter’s date of birth in the official school records.
He wanted to get it fixed in case it would be a problem later on, and he was told he’d have to fill out three forms in two different departments
(Department of Education and the local school) to get it fixed. He decided not to bother with it, since the date is pretty close (it’s only off by a few
days, and the month is the same) and there’s no harm done. But that means there’s a slight discrepancy between her birth certificate and the school’s
official records. If (god forbid) she’s ever killed in a school shooting, this could be seen by conspiracy folks as evidence that something is suspicious
when in fact it’s good old incompetence—the kind that happens every day but is usually ignored, later corrected, or never even noticed unless dates are
cross-checked for some reason.

A similar “suspicious typo” comes up with Elvis conspiracies: Why is Elvis Presley’s middle name (Aaron) misspelled on his tombstone? Many conspiracy
theorists point to this “mistake” as evidence that something suspicious is afoot, including that he was buried somewhere else, or may even be alive. The
fact is that Elvis wanted his name changed from the original Aron to Aaron, so that’s what was done even though that’s not his original name. There’s no
mystery.

I’m not making excuses, just offering my best guess. I think the real issue—assuming that it’s true that Lanza’s death date is one day off from the actual
one—is what do you think it means, if anything? What conclusion are you, or anyone else, drawing from that fact? That Lanza was actually dead the day
before dozens of people saw him walk into Sandy Hook school? That someone else killed the teachers and children? (If so, who, and why?).

Nancy Lanza’s death certificate indicates she was pronounced dead on December 14 as the result of multiple gunshot wounds. Obviously Adam was alive on
December 14, regardless of what the SSA listing says—unless of course someone else killed his mother and the people at the school? (If so, who, and why?)

In science we have an important scientific principle called Occam’s Razor. This idea is that if you have a phenomenon to be explained and several different
theories are proposed as solutions, the simplest one (or the one with the fewest assumptions) is likely to be the correct answer. So here’s the question:
Is it more likely that A) someone somewhere made a simple typographical mistake entering the date in a computer (something that happens countless times a
day in matters both large and small) and that Adam Lanza was actually killed December 14, as evidence and dozens of eyewitnesses can testify to first-hand;
or B) that Lanza actually died one day earlier, and that some unknown person caused the Sandy Hook shooting for reasons no one has explained, and Lanza was
being blamed for it, again for reasons no one has explained? And so on.

I’m not telling you what to think, and honestly I don’t care whether you think a conspiracy exists, or that there’s anything sinister or suspicious about
the (apparent) error on a database. You asked for my opinion, and I’ve given you my best answer. If you find out more about it, I’ll be interested to hear.

He wrote back thanking me for my comments but was clearly not completely satisfied, and we ended our correspondence. That is, until two weeks later when I
came across a story in the Huffington Post that addressed this issue:

However, there is no death certificate for Adam Lanza—yet. Lanza’s certificate will become available after it’s been filed with the Newtown Registrar of
Vital Records. That will happen once the case is completed, said Debbie Aurelia, the New­town town clerk. But the case won’t be completed until the
toxicology reports are finished, which “won’t happen too quickly,” the office of the Medical Examiner told HuffPost over the phone. (On Jan. 17, CNSNews
reported that state police said the report is still “several months away.”) Even if the Social Security Administration made the mistake, it wouldn’t be the
first time it’s happened. In fact, between May 2007 and April 2010, more than 36,000 people were reported as dead by the Social Security Administration
although they were still alive, CNN reported in 2011. A 2012 report by the Office of the Inspector General found the Social Security Administration failed
to record the deaths of about 1.2 million people. Clearly, it is not immune from making mistakes; even the agency itself refuses to guarantee the accuracy
of the Death Master File. HuffPost has requested a copy of Adam Lanza’s death certificate and will update the story when the request is fulfilled.

I contacted him with the link, and he wrote back: “Thank you. It’s good to see a mainstream source finally addressing it. I think what disturbed me the
most was how close I came to thinking maybe there was something to this claim. I knew it had to be a mistake, but what an absolutely irresponsible mistake
to make. Perhaps data entry has been outsourced as well. Anyway, thanks for taking the time to correspond.”

Sometimes critical thinking outreach is done one person at a time.

Whose Burden of Proof?

Obesity: What Does the Science Really Say?

Nurturing Non-Science: Startling Concepts in the Education of Physicians