Do You Believe in Magic? The Sense and Nonsense of Alternative Medicine. By Paul Offit, MD. 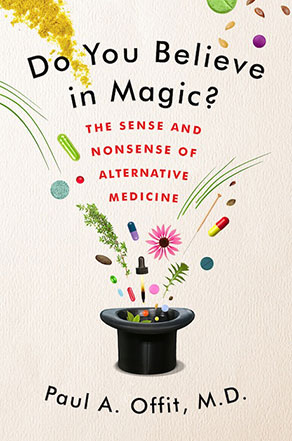 Dr. Paul Offit, a pediatrician and professor of vaccinology at the University of Pennsylvania, codeveloped a rotavirus vaccine that has saved hundreds of
lives. His previous books Autism’s False Prophets and Deadly Choices examined the misinformation spread by the anti-vaccine movement
following Andrew Wakefield’s infamous vaccine/autism study. Now he turns his attention to the field of alternative medicine with a new book, Do You Believe in Magic? The Sense and Nonsense of Alternative Medicine.

He explains why alternative therapies are popular: mainstream doctors are perceived as uncaring and dictatorial, offering unnatural remedies with
intolerable side effects, while alternative healers provide natural remedies, comfort, and individual attention. But he warns that “natural” remedies
mustn’t be given a free pass. Unless we hold all therapies to the same high standard of scientific proof, we risk being hoodwinked by healers who believe
in magic.

Being a scientist, Offit’s approach was to review studies of various alternative treatments to see what worked. He found that most of them didn’t, and when
they did work, it was how they worked that was surprising.

Offit is a wonderful storyteller who makes his message come alive. Each chapter is a story that grabs the reader’s interest and holds it. In the
introduction, he tells us that when seven-year-old Joey Hofbauer was diagnosed with Hodgkin’s lymphoma, he had a 95 percent probability of cure with
radiation and chemotherapy. His parents rejected the oncologist’s recommendations, and with the collusion of the courts they put him under the care of a
psychiatrist who gave him Laetrile, coffee enemas, a “witch doctor’s diet,” and a mixture of other nonsensical treatments. Joey died riddled with cancer,
and yet the psychiatrist went on to treat other patients the same way.

One chapter features Dr. Oz, de­­scrib­ing some of the believers in magic featured on his show. Another chapter tells the story of Linus Pauling’s
unfortunate infatuation with vitamin C. Another tells how diet supplement industry lobbyists and colluding politicians neutered the FDA by passing the Diet
Supplement Health and Education Act, allowing the marketing of products without any prior testing for safety or efficacy. He eviscerates Suzanne Somers for
her anti-aging regimen and Jenny McCarthy for her crusade against vaccines. He reveals how a nonexistent disease, Chronic Lyme Disease, was invented and
popularized and how the myth continues to harm patients. He builds on Steve Jobs’s flirtation with alternative treatments for his pancreatic cancer to
cover the larger story of bogus cancer cures, from shark cartilage to Krebiozen to Gerson therapy. A separate chapter is devoted to Stanislaw Burzynski,
the “anti-neoplaston” cancer doctor who charges patients exorbitantly to be subjects in experiments that never seem to get published and who claims huge
success rates that have never been confirmed when independent reviewers have looked at his cases. And then there’s Rashid Buttar, who mistreated thousands
of autistic children and cancer patients with useless (and potentially harmful) chelation therapy; and all the medical board did was order him to provide a
consent form advising patients that his treatments were unproven.

• Recommending against conventional therapies that are helpful. (He mentions Andrew Weil, Joe Mercola, chiropractors, Deepak Chopra, and others as guilty
of that sin.)

The subject is one I know a lot about, so I didn’t expect any surprises. Nevertheless, he surprised me with back stories and intriguing details I had not
known. I knew Suzanne Somers used bioidentical hormones, but I didn’t know about all of the forty-seven other remedies she uses, or that she rubs
glutathione into the skin over her liver to stimulate it. His explanation of the political machinations behind the FDA and diet supplement laws is the best
I have read. He gives a wealth of interesting information while providing incisive insights into why patients and doctors do what they do.

Violence, Here and Above

Mathematical Explanations and Degrees of Impossibility

The Mystery of the Sicilian Avengers

Why Gay and Lesbian? A New Proposal

Down the Garden Path: Faulty Thinking and Self-Delusion