Can people move or alter physical objects simply by using a hidden power of the mind called psychokinesis? I have encountered many claims of such powers in
the course of my work (since 1969) as a paranormal investigator. And I have pretended to have such ability myself—both as a professional stage magician and
mentalist (a magician specializing in apparent psychic feats). In the fall of 2012, I attended a workshop that enabled me to investigate the latest popular
expression of psychokinetic metal bending.

The term psychokinesis (formerly telekinesis), or PK, derives from the Greek words for “mind” and “motion.” Together with extrasensory
perception (ESP), it constitutes what parapsychologists refer to as “psi” to describe the two seemingly closely related phenomena. However, the
existence of psi has never been proven and, indeed, according to a sympathetic source: “Despite decades of research, psi continues to elude physical and
quasi-physical theories of how it functions; it operates outside the bounds of time and space” (Guiley 1991, 468).

PK describes the alleged power of mind over matter, including such “micro-PK” acts as subtly influencing how thrown dice will land, or “macro-PK” feats
like levitating a table or producing so-called “poltergeist” effects (actually, typically the tricks of children1). Psychokinetic metal bending
is another alleged macro-PK phenomenon. 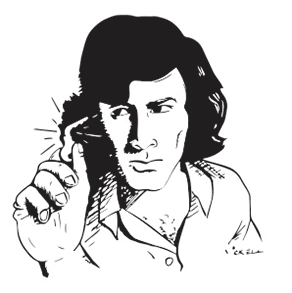 It appears that the first major performer of apparent PK metal bending (PK-MB) was Israeli-born former fashion model and nightclub magician, Uri Geller (b.
1946) (Figure 1). Claiming to be guided by super beings from a distant planet, Geller appeared to read minds, bend keys and cutlery with PK, see while
blindfolded, and perform other feats—all of which skilled magicians easily duplicate. (I, for example, have driven a car while blindfolded [Nickell with
Fischer 1992, 77].) He typically refused to perform when magicians were observing but, nevertheless, was occasionally caught cheating.

Renowned American magician and psychic investigator James “The Amazing” Randi once observed Geller up close. Posing as an editor when Geller performed in
the offices of Time magazine, Randi saw the simple tricks behind Geller’s wonderworking. For example, while Geller pretended to cover his eyes as
a secretary made a simple drawing, he actually peeked, thus enabling him to appear to read her mind and reproduce the drawing. Again, while supposedly
bending a key “by concentration,” Geller had instead bent it against a table when he thought he was unobserved. (For more on Geller’s methods, see Randi
1982.)

Geller was soon imitated by other “psychics” who discovered that they, too, could bend keys and spoons. One was Judy Knowles, who impressed London physics
professor and parapsychologist John Hasted with her apparent ability. Hasted invited James Randi to observe tests of Knowles in a lab at Bath. Randi
arrived with colleagues and his checkbook, offering Ms. Knowles $10,000 if she successfully passed the test, which was designed by Harry Collins of the
University of Bath. Collins had tested other spoon benders, but none had been successful, and some children had been caught cheating.

Briefly, the test involved Knowles holding the spoon in a single hand rested on a table before a two-way mirror. Observers, equipped with a video camera,
were on the opposite, see-through side of the mirror. A candle was used to blacken the bowl of the test spoon so that, if one attempted to cheat—using the
thumb to press against the bowl and so cause bending—the attempt would be revealed by the resulting smudging. Knowles tried unsuccessfully to bend the
spoon using PK, but after nearly two hours, she quit the test. Randi and colleagues concluded Knowles had been unsuccessful, while Hasted and associates
called the results “inconclusive” (Randi 1978, 36–39).

In the early 1980s, two young Americans, Steve Shaw and Mike Edwards, convinced parapsychologists at a psychical research laboratory in St. Louis,
Missouri, that they could use their PK powers to move objects and bend metal under test conditions. In 1983, however, the duo revealed that they had
perpetrated a hoax—now known as Project Alpha. Having worked secretly with James Randi, they demonstrated that credulous scientists could be fooled like
anyone else (Shaw 1996, 617–18; Randi 1995, 253–54). Shaw has gone on to become the internationally acclaimed mentalist Banachek.

As a colleague and friend of Bana­chek, I have seen his metal-bending effects firsthand many times, especially at one of his workshops for fellow magicians
and mentalists (Amherst, New York, June 16, 2009). His remarkable fork bend, whereby the tine of the fork is seen to visibly bend without being touched, is
superior to any of Uri Geller’s effects—according to no less an authority than the late skeptic and magician Martin Gardner (Shaw 1996, 615). 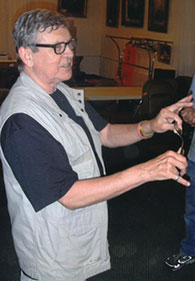 PK metal bending has evolved over time. As we have seen, performers ap­peared to bend metal by simply looking at it or stroking it lightly. Some­times they
even allegedly bent metal remotely. The performer might suggest, for instance, that people’s keys have mysteriously bent in their pockets or purses. In
fact keys may become accidentally bent in various ways (as by the key being used in haste so that the partially inserted key is turned in the lock
prematurely). Such an already bent key may go unnoticed until the performer calls attention to it (Shaw 1996, 619).

Major claimants of PK-MB were
—in addition to Uri Geller—Jean-Pierre Girard (France), Masuaki Riyota (Japan), and Stephen North (England), as well as another Israeli, Ronni Marcus. (In
1994, Unsolved Mysteries asked me to observe Marcus’s act at a conference. However, a producer subsequently called to say that the conference
organizers had refused to allow me to participate, and the TV show therefore withdrew its interest. I attended anyway, undercover, but Marcus was a no-show
amid revelations he had been caught cheating in California and had returned to Israel [Randi 1994].)

Soon, honest magicians and mentalists got into the act, demonstrating that very convincing PK-MB effects could be produced by trickery. The inescapable
inference was that perhaps the “real” effects were accomplished by tricks also. Among various shared secrets, some were sold through magic supply houses,
including Mark Walker’s book Key Bending (which also gave secrets to bending cutlery) (Abbott’s 1987, 337). Top-flight demonstrators of the magic
art of pseudo PK-MB are James Randi and Banachek.

Later, laypeople began to try their hand, quite literally. Beginning in the 1980s, at metal-bending parties and workshops attendees began surprising
themselves with their newfound PK-MB abilities. They typically bent spoons with their hands while insisting they did not exert sufficient force to cause
the extent of bending achieved. What was going on? 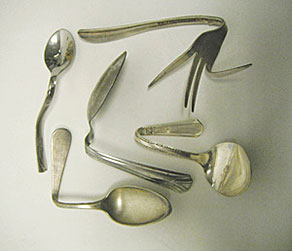 Figure 3. Cutlery was bent by the author at a Lily Dale workshop. (Photo by Joe Nickell)

On the evening of August 23, 2012, my wife, Diana, and I showed up at a workshop in Lily Dale, a tiny village in Western New York that represents the
world’s largest spiritualist community. The session was conducted by Ron Nagy, curator of the Lily Dale Museum and an old friend (Figure 2). In the spirit
of openness he had invited me to attend, and we mutually agreed not to be adversarial. That is, he would not “out” me as a notorious skeptic, and I would
not be troublesome.

The ad for the workshop defined psychokinesis as “the movement of objects without physical contact,” then went on to promise:

This workshop will explain the basic mind over matter aspects of bending metal objects and also explain how the mind and body can react together and cause
harmonious health conditions. This workshop is intended to be fun and also provide experiences previously believed to be impossible that should reduce some
of the artificial limits we have placed in our lives. It may seem remarkable that with very little training one might be able to accomplish this
extraordinary proof that belief in spirit and mind over matter is more powerful than certain realities. (“Spoon Bending” 2012)

For the next two hours, we held spoons (and occasionally forks) in our hands as we implored them to respond to our thoughts. To free our minds, Ron had
us—acting in unison—jump in the air and turn around twice, while thinking the metal was bending. Sure enough, for all but one or two of the thirty or so
participants, we achieved bending. I had especially good results. (See Figure 3.) Some participants seemed quite mystified.

However, I could see early on that a positive attitude was helpful: Being confident that the spoon would easily bend helped overcome the negative first
impression that the metal was resistant. Such is the power of positive thinking.

What I think really happens in such situations is that one simply exerts sufficient strength to cause the bending (I was even able to put spiral twists
into the handle—again see Figure 3) while being somewhat distracted from the process. An ability to dissociate (to separate a mental activity from
the main stream of consciousness) seems a definite asset, because the bending relies heavily on the ideomotor effect (the psychological phenomenon
in which, unconsciously, one moves his or her hand sufficiently to affect dowsing rods, Ouija-board planchettes, and the like [Nickell 2012, 348–49]).

PK-MB partygoers have inadvertently described the very processes I have explained. One wrote, “. . . we needed to create an atmosphere of excitement and
emotional arousal.” The party host, an engineer named Jack Houck, “encouraged us to be noisy and excited.” The writer added, “The only thing I noticed is
that spoon bending seemed to require a focused attention. You had to try to get it to bend, and then you had to forget about it. Maybe talk to someone else
while you rubbed the spoon. . . . If you kept watching the spoon, worrying over it, it was less likely to bend” (“Spoon Bending” 2013).

The ad for our workshop defined PK as occurring “without physical contact”; this means that PK was not demonstrated by the participants, since they had
held the cutlery in both hands in the very way one would in order to deliberately bend it. But this workshop did not involve trickery. The only deception
that seemed involved was self-deception.

Nickell, Joe. 2012. The Science of Ghosts: Searching for Spirits of the Dead. Amherst, NY: Prometheus Books.

Violence, Here and Above

Mathematical Explanations and Degrees of Impossibility

The Mystery of the Sicilian Avengers

Why Gay and Lesbian? A New Proposal

Down the Garden Path: Faulty Thinking and Self-Delusion