The latest public confusion about climate change involves an apparent slowing of the rise of global temperatures. What is the reality concerning this putative temperature ‘plateau’?

Human-caused (anthropogenic) global warming has been a topic of major scientific interest for more than half a century, and its consequences are broadly
apparent in rising surface and ocean temperatures, dramatic changes in Arctic ice, rising sea levels, and a multitude of stresses placed on ecosystems
around the planet, such as poleward migration of bark beetles killing vast forests. However, some powerful organizations dispute the reality of this
climate change and the role of the greenhouse effect as its cause. In the United States, there is widespread public confusion—or even outright denial—about
global warming. 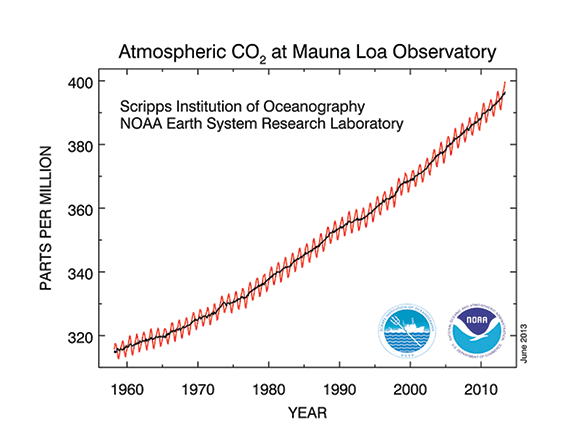 Atmospheric CO2 as measured from the Mauna Loa Observatory since 1958. Note the small repeating seasonal variations. There is a steady
overall increase from 315 to 400 ppm, and the slight upward curvature shows the acceleration in the deposition of CO2. Carbon dioxide is
the primary greenhouse gas in the atmosphere, and as such is the main driver of climate change. The increasing CO2 greenhouse is causing an
energy imbalance, with more heat added to the Earth every year. However, only a part of this excess energy goes to increase the surface air
temperatures, which are also subject to a variety of other influences. Data from Pieter Tans, NOAA/ESRL
(www.esrl.noaa.gov/gmd/ccgg/trends/) and Ralph Keeling, Scripps Institution of Oceanography (scrippsco2.ucsd.edu/).

A major recent source of public misunderstanding is the slowing of the rise of temperature (the so-called temperature “plateau”) that is apparent in annual
average global surface temperature over the past fifteen years, following rapid warming in the preceding twenty-five years. Adding to some people’s
bewilderment is the fact that atmospheric and climate scientists tend to downplay this supposed plateau and continue to assert that the planet is warming
at a dangerous rate. What is the reality behind this divergence of opinion between scientists and their critics concerning the reality and significance of
the putative plateau?

Before addressing the surface temperature issue, it’s helpful to review the scientific case for continuing global climate change. The reality of the
greenhouse effect and the implications of increasing carbon dioxide in the atmosphere have been known since the pioneering work of Svante Arrhenius in
1896. The steady increase in atmospheric CO2 since the beginning of the industrial revolution has been monitored directly since 1959
and reconstructed for earlier years from atmospheric samples trapped in ice. In May 2013 the concentration reached 400 ppm, 43 percent above pre-industrial
CO2 levels. This increase is almost entirely caused by human burning of fossil fuels and deforestation. Basic physics tells us that the
increasing CO2 greenhouse effect will affect the temperature of the planet; the key question is by how much.

In the past two decades we have been able, for the first time, to measure the greenhouse heating and to track where the excess heat is deposited. Excess
greenhouse gases trap heat in the atmosphere and reduce infrared radiation to space. The imbalance causes the Earth to absorb more energy than it radiates.
Most of that energy is going into the ocean, not the surface or atmosphere. Global ocean temperatures are now measurable for the first time by the Argo
deep ocean probes—an international network of more than 3,000 measuring stations that measure ocean temperatures down to two kilometers depth. One
consequence of ocean heating is sea level rise from thermal expansion of the water, now taking place at an average rate of 3.3 ± 0.4 mm per year (based on
data from 1993 to 2009).

The effects of global warming are visible in many natural systems. The most dramatic changes are in the Arctic. In the Arctic Ocean, the minimum summer ice
cover has shrunk by more than 50 percent, and the residual ice is only about half as thick as it was thirty years ago. The Greenland ice sheet is rapidly
shrinking, as measured by satellites that sense the total mass of ice, and in the summer of 2012 it lost an astounding 500 cubic kilometers of ice. Most of
the ice does not melt in place, but surface melt water lubricates the ice flow and causes much more ice to flow into the sea. The warming ocean then
supplies the energy to melt this ice. There is similar ice loss in the Antarctic, primarily by erosion of floating ice shelves from below by warmer
seawater.

All this evidence demonstrates the recent acceleration of global warming. But what about the evidence from global surface temperatures?

The often-quoted global surface temperatures are a measurement of only a very small part of the global energy balance. However, they are important for two
reasons. First, they are part of a continuous record of thermometer measurements that can be traced back a century and a half (and extended further into
the past by geologists), unlike the measurements of deep ocean heat or polar ice loss, which are limited to the past few decades. Second, these
measurements are easily appreciated by the public, relating to their sense of what warming means.

Surface temperatures fluctuate for many reasons other than greenhouse warming. For example, they are slightly affected by small variations in solar heating
(the solar activity cycle). They are dominated on the short term by weather and by such multiyear cycles as the El Nino-Southern Oscillation (ENSO), which
involves major redistribution of heat between the ocean and the atmosphere. The year 1998 saw one of the largest ENSO events in history, with resulting
high measured temperatures. For all of these reasons, climate scientists looking for the effects of greenhouse warming prefer to average surface
temperatures over timescales longer than a decade to help smooth out the “noise” caused by the solar cycle, ENSO, and other short-term changes due to
volcanic eruptions. 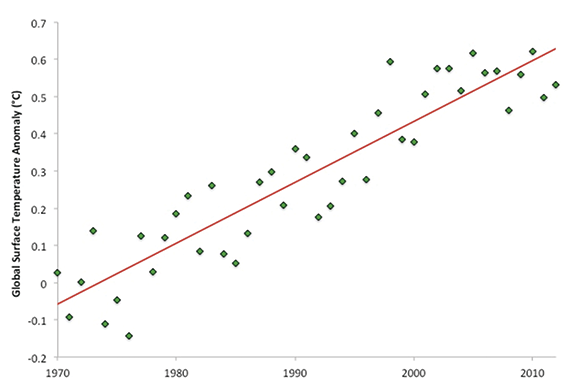 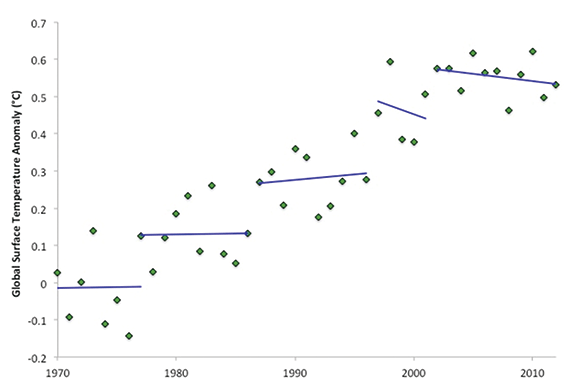 Two perspectives on the global average temperature changes since 1970. In the upper panel, the data are fit with a straight line. In the lower panel, they are fit with several straight-line segments, giving a “stair-step” fit. Both show the same temperature increase of 0.7 C over forty-two years, but we react differently depending on the way the data are presented. The plots show annual temperatures, relative to the average from 1964–1994. Data are averages from NASA (Goddard Institute for Space Studies), NOAA (National Climatic Data Center), and the UK Met Office (Hadley Centre). Figure compliments of Dana Nuccitelli (skepticalscience.com).

Climate is not the same as weather, nor is it defined by this short-term interannual variability. Climate has long been considered to be a twenty- to
thirty-year average. So whatever plateau may appear in annual temperature records, it is dominated by short-term fluctuations. There is no plateau in
climatologically significant temperature. However, we are impatient and unwilling to wait twenty to thirty years to assess the reality of climate change.
Looking at just the past decade of surface temperature measurements, there is an apparent plateau.

The two charts on p. 9 illustrate two different ways to look at the same information. Both plot the measured global temperatures from 1970 to 2012. The
first fits a straight line in order to derive an average rate of heating over the past half century. The second fits the same data with a series of
straight lines. The multiple straight-line fits show a temperature plateau from 2001 to 2012.

These charts illustrate two equally plausible ways to look at the data. One indicates a steady increase in temperature; the other shows a stair step or
“escalator.” Both show that the temperatures are rising, either continuously or episodically—take your choice. The temperatures in every decade over the
past half-century have been higher than in the previous decade, and the two warmest years were both in the past decade, in 2005 and 2010.

This short-term temperature plateau has become the primary argument of those who either question or outright deny the reality of human-caused global
warming. Their argument is part of an overall denialist position that does not recognize the reality of climate science. Sometimes it is said that carbon
dioxide is such a minor fraction of the atmosphere that it could not contribute to climate change, or even that it is absurd to imagine that anything
humans do can have a major effect on our planet. This narrative asserts that climate scientists are simply seeing a correlation between temperatures and CO2 concentration and claiming naively that this correlation implies causation. Therefore, if the temperatures do not rise steadily with CO2, this disproves the entire idea of climate change.

The denialists do not acknowledge the broad-based evidence of climate change, or the thousands of scientific papers published annually that strengthen our
understanding of climate and have never been rebutted scientifically. Their tactic is similar to that of the evolution deniers, who ignore entirely the
research of evolutionary scientists and assert, simply, that biologists believe absolutely in the correctness of Darwin and have been naively interpreting
all evidence according to a Darwinian dogma.

Those who deny climate science and evolutionary biology set up a strawman caricature of science and often succeed because so few people understand how
science really operates.

John R. Mashey is a computer scientist whose career has extended from Bell Labs to the Silicon Valley. Many of the wide variety of scientists he has worked with have used software or hardware he helped create. For the past few years he has been studying climate science, anti-science, and energy issues.

Mark Boslough is an impact physicist. After a 33-year career at Sandia National Laboratories, he is now affiliated with Los Alamos National Laboratory and is also an adjunct faculty member at the University of New Mexico. He is a Fellow of the Committee for Skeptical Inquiry.

The Mysteries of Leonardo

You Can’t Possibly Be Sirius!

Obesity Redux: A Response to Readers