Anyone who follows news stories about UFOs knows that there are a heck of a lot of them these days, and that many of them involve photographs. Frank Warren
of The UFO Chronicles has written an eye-opening article, “UFO Hoaxes with the Touch of a Finger” (http://tinyurl.com/UFOapp). Warren is well
known as a UFO proponent, but he is no friend to hoaxers. I knew that it was possible to create all manner of digital UFOs in photographs. What I did not
realize was just how easy it has become. Warren notes that there are many iPhone and/or Android apps written specifically for inserting UFOs into photos:

Most of these apps allow you to select the UFO you wish to add, size it, and place it where you want it to be. One of the UFO choices in UFO Camera Gold is
my very own Cottage Cheese Container UFO, published many times, that can be seen on my Skeptics’ UFO Page (http://debunker.com/ufo.html). Some of these
apps can insert aliens into your photos as well. Warren cites two examples of credulous UFO news stories that have been written about fake photos made with
apps just like these. It’s true that these are not great-quality fakes. Warren says, “For most seasoned Ufologists the hoaxed photos are blatantly obvious;
unfortunately, that minority won’t stop the MSM [mainstream media] from paying heed to the latest hokum produced.” Unfortunately, he is quite correct: it
seems that some of the most credulous people around are reporters, who are supposed to be skeptical by their profession. I suspect that the cynical pursuit
of sensationalism and ratings is really behind that. 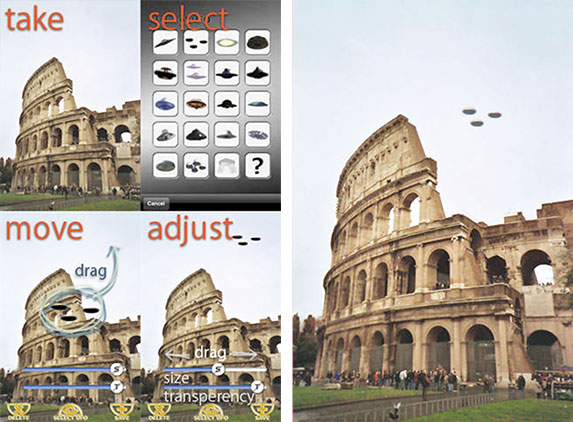 What all this means is that it is now trivially easy for just about anyone to produce a semi-convincing UFO photo hoax. And since “progress” in software is
inevitable, we can expect to see better and better UFO hoax photos with each passing year. Which means: unless you can absolutely confirm a photo’s origin,
and confirm that a UFO was not simply added using hoaxing software, you can’t believe anything that you see in a supposed UFO photo any longer.

On June 20, 2013, news outlets re­ported that the British Ministry of Defense (MoD), which closed down its UFO Sightings desk in 2009, had just released
the very last of its UFO files into the public domain. You can read the files at http://ufos.nationalarchives.gov.uk/. One would expect that well-known UFO
proponents, who have been hollering for “UFO disclosure” for years, would be delighted. If so, one would be wrong. Nick Pope, for example, is very upset,
and so are many others.

Nick Pope is a major UFO celebrity, originally from the United Kingdom but now living in the United States. He claims that he was skeptical of UFOs prior
to his work at the MoD UFO desk (there never was such a thing as a “UFO Project”), but in fact Pope believes he was abducted by aliens during a trip to
Florida in January 1991, before he began working for the MoD. The Sunday Times of London reported on February 7, 1999, that

The Ministry of Defence official who once headed investigations into unidentified flying objects believes he was abducted by aliens. Nick Pope, who
[allegedly] ran the ministry’s top secret Airstaff Secretariat office during the early 1990s, believes that he, his girlfriend and their car were abducted
from a deserted toll road in Florida. He has described how he was lifted aboard an alien spacecraft and then wandered around its corridors—without,
however, meeting any aliens.

In reality, while Pope claims he ran “the British Government’s UFO Project,” he didn’t run anything, and only worked part-time at the UFO Desk from 1991 to
1994. In the summer of 2012, Pope was in many news stories warning about a supposed “alien invasion” that could come at any time. He also warned of
possible mass UFO appearances during the London Olympics.

Pope has recently been on the defensive, emphasizing that he did not actually predict an alien invasion, as many news stories and blogs reported in the
summer of 2012. He said he was merely promoting a “space war” type of video game, and reporters took his comments out of context. However, he can’t explain
away comments like, “The government must—and has planned—for the worst-case scenario: alien attack and alien invasion. Space shuttles, lasers and
directed-energy weapons are all committed via the Alien Invasion War Plan to defence against any alien ships in orbit.” Just do an Internet search for
“Nick Pope Alien Invasion,” which brings up many news stories, including this later one from October 12, 2012, “Britain has alien-war weapons, says former
government adviser,” and even “Aliens Could Attack at Any Time” from 2006.

One reason that UFOlogists are up­set is that the newly released UFO files contain nothing whatsoever of any real interest, and are in fact rather
embarrassing to the pro-UFO side. As reported by the BBC:

Carl Mantell of the RAF’s Air Com­mand, suggested the MoD should try to significantly reduce the UFO work. He said it was “consuming increasing resource,
but produces no valuable defence output.” He told Mr. Ainsworth that in more than 50 years, “no UFO sighting reported to [the MoD] has ever revealed
anything to suggest an extra-terrestrial presence or military threat to the U.K.” Among the 4,400 pages of documents released are:

• A letter from a school child in Altrincham, Greater Manchester, to the MoD, dated January 2009, asking if aliens exist after she had seen some strange
lights, and including a drawing of an alien in a UFO waving.

• A report received via the UFO hotline by someone who had been “living with an alien” in Carlisle for some time.

• A report from a man from Cardiff who claimed a UFO abducted his dog, and took his car and tent, while he was camping with friends in 2007.

When my name was included on a list prepared by NASA during the 1970s and 1980s of people who had information on UFOs (since they did not), I used to
receive dozens of letters like this. Most of the correspondence came from schoolchildren requesting information. I would usually reply with just a page or
two of skeptical materials, but I suppose that was not what they wanted to receive.

David Clarke, according to The Telegraph (June 21, 2013), “has been the National Archives ‘UFO consultant’ for five year[s of the] project, during
which it has made public more than 52,000 pages of official government files relating to mysterious sightings.” Clarke is a former reporter and currently
course leader and senior lecturer in journalism at Sheffield Hallam University teaching media law and investigation skills. His PhD is in folklore from the
National Centre for English Cultural Tradition, University of Sheffield. Since 2008, he has been working with The National Archives (TNA) as their
consultant for the ongoing release of the UFO files created by Britain’s Ministry of Defence. Clarke says that

from 2000 onwards my FOI campaign made me a thorn in the side of the MoD to the extent that after seven years of constant pressure they relented and
decided to transfer all surviving UFO papers to The National Archives. But instead of hailing the disclosure as a breakthrough, conspiracy nuts have
portrayed it as a cover-up because the documents do not provide any support for their beliefs (http://tinyurl.com/pv6d6da).

A claim by the British Ministry of Defence that UFOs have no defense significance is “designed solely to keep Parliament, the media and the public off our
backs,” according to former MoD UFO Desk administrator Nick Pope. . . . Official MoD spokesmen and one self-styled UFO expert, David Clarke, claims that
the MoD found no evidence of a UFO threat to the UK and, therefore, closed its UFO Desk. . . .

Regarding David Clarke, Pope says, “Some people would probably use the term ‘useful idiot’ to describe his parroting the MoD ‘no defense significance’
sound bite.”

Clarke had made a Freedom of Information request of the MoD for “copies of MoD papers, records, or other information relating to internal discussion,
policy and/or briefings in response to public statements made to the media and via the release of Open Skies, Closed Minds by Nick Pope during the
period 1995–96” (http://drdavidclarke.blogspot.co.uk/2010/07/open-skies-closed-files.html).

As Clarke explained to Pope at the time, “my request was specifically for ‘internal comment on your Press interviews in 1996 and MoD’s discussion of what
line to take’ and not for access to his private correspondence with his employers over the clearance of his manuscript (with one exception that concerns a
specific letter which he had quoted from in the public domain).” Clarke’s request was not granted, and it turns out that the reason was that Pope “has
written to the MoD and asked for the information not to be released into the public domain.”

So much for “full disclosure”!

Why We Do This: Revisiting the Higher Values of Skeptical Inquiry

Detective: Uncovering the Mysteries of a Word

UFO Hoaxes? There’s an App for That!

Taking Our Medicine: What Hope for Skepticism in Healthcare?

The Future of High Energy Physics in the United States

Losing Our Minds in the Age of Brain Science