Here are the remarks by CFI President and CEO Ronald A. Lindsay at the CFI Summit in Tacoma presenting the organization’s Lifetime Achievement Award to Eugenie C. Scott. 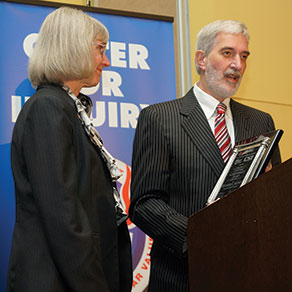 Where would we be without Eugenie Scott?

This is a serious question. The struggle for the integrity of science education in the United States, especially in regard to the teaching of evolution,
has been a grueling slog, a war of attrition. Despite the fact that creationism is an outdated myth, evolution’s opponents have been tenacious, determined,
and even at times, clever. With every victory for science and reason, those who want religious indoctrination to be part of our public schools adapt,
change their tactics, adjust their language and messaging, and, well, evolve to suit a changing environment.

In other words, no one political or legal win for science spells the end of the creationist assault on education. At least not so far. But we would be in a
much worse position if not for Eugenie Scott.

Most of you know about the high profile victories. Perhaps most famously, Dr. Scott was instrumental in the win for science in the Dover Trial, in which
intelligent design, a rickety Trojan Horse for creationism, was almost laughed out of the courtroom. But it was Dr. Scott and her team at the National
Center for Science Education (NCSE) who mustered the intellectual and academic forces necessary to make such a nationally recognized victory for science
possible. Not only did evolution win in a legal, technical sense, but what the judge called the “breathtaking inanity” of intelligent design was exposed
for what it is. It was a pivotal event legally, but perhaps even more so, it was pivotal culturally.

And this is where Dr. Scott has proven truly indispensable. In every new case, in every bad bill in a state legislature, or backward curriculum from a
creationist school board, the NCSE has not only brought to bear intellectual and scientific firepower, but in the person of Dr. Scott, science education
has perhaps its greatest ambassador. In the media, in talks to audiences like this one, in court rooms, and person to person, she brings an enthusiasm for
learning, a whip-smart sense of humor, an approachability that dispels stereotypes of scientists and secularists, and a generosity of spirit toward those
with whom she disagrees. Eugenie Scott has been crucial for the cause of science education, and she is truly irreplaceable.

But, though irreplaceable, she is moving on. As many of you know, Dr. Scott will be stepping down from her position as executive director of NCSE at the
end of this year, after a remarkable twenty-seven years on the job. Luckily for all of us, she leaves NCSE incredibly strong, nationally respected, and a
formidable force for the integrity of science education in America.

So, it gives me great pleasure to present this Center for Inquiry and Committee for Skeptical Inquiry Lifetime Achievement Award to Dr. Eugenie C. Scott,
“Champion of Evolution Education.” 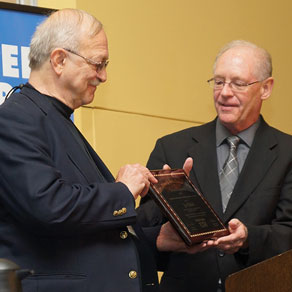 “It has been my great pleasure to have worked with Joe for several decades now . . . and I continue to be amazed, even awe-struck about his extraordinary
investigative skills, deep knowledge, insight, scholariness, professionalism, fairness, and literary productivity,” said CSI Executive Council member and
Skeptical Inquirer Editor Kendrick Frazier in presenting Nickell his award. “Both in the quality and the quantity of his investigations and writings, he is
a wonder, a true national treasure—international treasure really, because he investigates and is read everywhere he goes around the world—and one eminently
deserving of this year’s Robert P. Balles Prize.”

Ron Lindsay is senior research fellow at the Center for Inquiry, having previously served as president and CEO from 2008 to 2016. Prior to joining CFI, he was in private legal practice in Washington, D.C. for twenty-six years. He received his Ph.D. in philosophy from Georgetown University and his J.D. from the University of Virginia School of Law. Among other works, he is the author of Future Bioethics: Overcoming Taboos, Myths, and Dogmas (Prometheus 2008), the entry on “Euthanasia” for the International Encyclopedia of Ethics (Wiley Blackwell 2013), and The Necessity of Secularism: Why God Can’t Tell Us What To Do (Pitchstone Publishing 2014).

The Epistemology of Thought Experiments, Part 1

Between a Beer Joint and a Highway Warning Sign: The ‘Classic’ Cash-Landrum Case Unravels

The Lure of Mysterious Paintings

The Mystery of the Texas Chupacabra