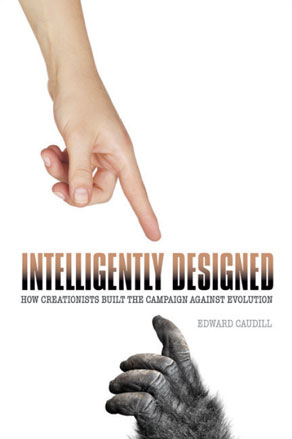 Why a new book reviewing the history of the creationist movement in the United States? Edward Caudill contends that his book Intelligently Designed: How Creationists Built the Campaign against Evolution distinctively emphasizes “the use of enduring cultural myths and the
dexterous employment of mass media” (6) in explaining the success of the creationist movement, and he further proposes that the Scopes trial of 1925
established a template for the ensuing developments. Caudill’s publication record, which includes Darwinism in the Press: The Evolution of an Idea
(1989), Darwinian Myths: The Legends and Misuses of a Theory (1997), and The Scopes Trial: A Photographic History (2000), certainly
suggests that he is equipped for the task. But his latest book is something of a disappointment, both in providing a history of the creationist movement
and in addressing the creationist use of myth and media.

As a history of the creationist movement, Intelligently Designed relates a familiar sequence of events, from the attempts to ban the teaching of
evolution in the 1920s, through the attempts to balance the teaching of evolution with the Bible, creation science, or intelligent design from 1973 to
2005, to the ongoing attempts to portray evolution as controversial. Caudill is especially strong on the Scopes trial of 1925, devoting a chapter to
comparing and contrasting the iconic figures of William Jennings Bryan and Clarence Darrow, on the political mainstreaming of antievolutionism during the
1980s, and on the inward turn of young-Earth creationism to its own parallel culture in the wake of the Supreme Court’s 1987 decision in Edwards v. Aguillard that teaching creationism in the public schools is unconstitutional.

Unfortunately, the historical value of the book is compromised by errors and omissions. For example, Caudill consistently misspells the name of the lead
plaintiff in McLean v. Arkansas, wrongly claims that the Arkansas law overturned in Epperson was enacted by the legislature
(rather than by initiative), and mistakenly asserts that the Creation Research Society was involved in the publication of a book from the American
Scientific Affiliation. While devoting a section to Alleged, a creationist film about the Scopes trial, he makes no mention of Expelled,
a creationist film that, unlike Alleged, won a national theatrical release and significant publicity. While devoting a section to the
antievolution effort in Kansas in 2005, which resulted in a transient defeat for evolution in the state standards, he makes no mention of the similar and
historically continuous antievolution effort in Kansas in 1998.

When Caudill discusses creationist myths, he is not addressing the persistent misrepresentations and misconceptions that circulate in creationist circles,
like the idea that Darwin recanted evolution on his deathbed or the idea that there are no transitional forms to be found in the fossil record. Rather, he
is addressing social themes that reflect values and structure thought. Caudill identifies four myths with special resonance for the creationist movement:
“the garden, the frontier, progress and science, individualism and egalitarianism” (11). But while it is plausible enough for him to observe, for example,
that creationists like to portray themselves as rebels, mavericks, and underdogs, thus invoking the frontier myth, the observation is inert in the book. It
is perhaps significant that these myths are explicitly discussed in only two passages in Intelligently Designed.

Caudill repeatedly pauses to summarize and assess the media’s coverage of the events he discusses. His assessments are generally judicious and frequently
insightful. But there is no evidence that there is any underlying methodology. How was it decided which reports to assess? What criteria were used? What
steps were taken to ensure that the criteria were applied consistently? Devising and executing a quantitative approach to assessing the media’s coverage
would have been laborious, perhaps, but it would not have been otherwise difficult, and it would have enabled Caudill not only to provide a rigorous
assessment of the reports but also to investigate questions that his impressionistic approach is ill-equipped to investigate. The same is true of his
assessments of the effectiveness of creationist responses to mainstream expositions of evolution.

Caudill appeals to poll data, especially from Gallup, to justify his claim that creationists managed, by dint of their use of myth and media, to triumph in
the public sphere. But his discussion is not sufficiently critical. He sometimes misconstrues the creationist response in Gallup’s polling as a young-Earth
creationist response; he ignores the mixture of religious issues with scientific issues in Gallup’s questions; and he is apparently unaware of the fact,
demonstrated by George Bishop and his colleagues, that adding “don’t know” and “not sure” as options reveals substantial ambivalence and uncertainty in
public opinion about evolution that is otherwise invisible. Caudill is not wrong to think that creationism enjoys a degree of public acceptance
incommensurate with its scientific credibility, but the details are not as straightforward as he seems to think.

Although the book is generally clearly written and organized, it contains distracting repetitions and ambiguities. For example, on p. 110, Caudill writes,
“The national press fell prey to its own standards,” adding, in the next paragraph, “The press had fallen victim to its own practices and standards.” On p.
43, he misstates the date and provisions of a Tennessee law, and yet he correctly states them on p. 65. On p. 102, Rick Santorum is said to have “withdrawn
affiliation with a Christian rights law center that defended the Dover schools policy”; in the next sentence, he is said “to have been on the advisory
board of the Thomas More Law Center, which aided the defense in Dover.” The two organizations cited are, in fact, one and the same, but there is no clue
for the untutored reader. Flaws like these should have been eliminated at the copyediting stage, if not sooner.

In a bibliographical portion of his book, Caudill reviews the major works on the history of the creationist movement, concluding, “Almost all of these
books recognized, or at least alluded to, politics and various media in the history of creationism. None, however, dealt with creationism/intelligent
design per se in the press, including the ways in which creationists appealed to the press and how creationists turned the attention into a movement …
There are no cultural histories of creationism as a politicized and mediated twentieth-century movement” (pp. 5–6). Although he succeeded in identifying a
genuine lacuna in the literature, his attempt to fill it was, unfortunately, not so successful. Perhaps the greatest value of Intelligently Designed will be in its inspiring future scholars to continue the project of understanding the creationist use of myth and media.