The modern practice of witch hunting in India includes violence and beliefs that have led to the torture and murder of alleged witches. State governments and rationalist groups are trying to address the problem but face big obstacles.

When Americans think of burning witches, they often consider it a metaphor or historical event from hundreds of years ago. Yet in many parts of the world, elderly widows live in fear of being killed as “witches” when a neighbor becomes ill or livestock die unexpectedly. India represents a modern-day paradox. On the one hand, it is the largest democracy in the world and has a rapidly growing economy. On the other, most of the population remains poor, and Indians, both educated and not, often turn to superstition to cure illness, find love, and rationalize bad events. This modern superstition has deadly consequences reminiscent of the witchcraft craze in America. In India, a person accused of being a “dayan” or witch can be tortured, raped, hacked to death, or burned alive. Victims are often single older women, usually widows, but they can also be males or children.

A 2002 Skeptical Briefs report (Vijayam 2002) detailed a team of medical doctors, magicians, and social workers who conducted educational outreach in rural Indian villages to prevent violence spawned by belief in witchcraft. Despite such efforts, superstitious belief in witchcraft continues to plague parts of India, resulting in injury or death. The Indian government’s most recent data shows that 119 people were killed with witchcraft being the “motivation” in 2012. According to the Times of India, a National Crime Records Bureau report revealed that more than 1,700 women were murdered for witchcraft between 1991 and 2010. The numbers are undoubtedly actually higher, as many cases go unreported or authorities refuse to register the cases.

Allegations of witchcraft that result in communal murder have long been a part of rural India’s history. Scholar Ajay Skaria, for instance, explored the torture and murder of women who were accused of being witches in British India. This practice has continued, though with irregularity, into the present. A 2013 Al Jazeera documentary explored the lives of women who were accused of practicing witchcraft. For those who are lucky enough to live after the accusations, they often are forced to move to a new area without resources to start their lives over. Many of the accusations have roots in property disputes, local politics, and disease, which then develop into allegations of witchcraft and then to violence. In recent years, there has been a concentrated effort to help women who fled their villages because of persecution. But according to Al Jazeera, there are only three Indian states that have legislation to address accusations of witchcraft. 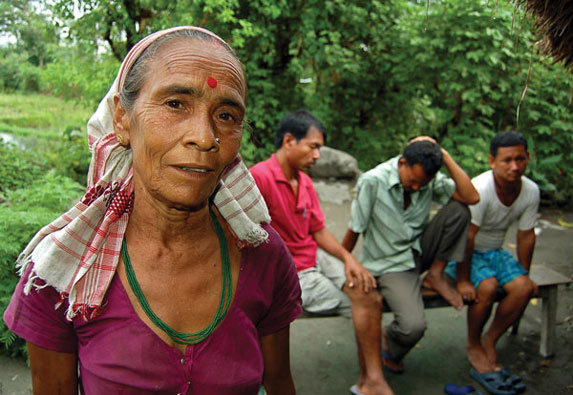 Dimbeswari Bhattarai, a witch doctor, or ojha, speaks during an interview with Reuters in Uttarkuchi village in India’s northeastern state of Assam, September 7, 2006. Police say that around 300 people have been killed in the state in the past five years for allegedly practicing witchcraft.

One state government that passed legislation is Jharkhand, a state in Eastern India that is ranked twenty-five out of twenty-eight in literacy. The state is famous for an indigenous religion called Sarna, derived from oral tradition, which does not treat women equally to men. Compounded with women being second-class citizens, single women, especially widows, are the targets of witchcraft accusations. In 2001, the Jharkhand government passed the Dayan Pratha (Prevention of Witch Practices) Act to protect women from inhumane treatment and give victims legal recourse to abuse. Some people have described witch hunting as a “common” phenomenon in the state, and the law has not eliminated the practice.

In the last two years, there have been several notable murders involving allegations of witchcraft. In 2012, four people were murdered in about a month’s span in Jharkhand. If the suspects are convicted of breaking the Dayan Pratha law, they will face a longer prison sentence than if they just committed murder. Bimla Pradhan, Jharkhand’s social welfare minister, said the government has funded an awareness campaign to end the superstition that “has led to atrocities against women” (“Withcraft Claims Lives” 2012). Nevertheless, in November 2013, a mother and daughter in Jharkhand were pulled out of their home by villagers who took them to a nearby forest and slit their throats. After the mother’s husband died years before, rumors began that the women were witches, and villagers blamed the women for several children becoming ill. Regarding the murders, police said: “All I can say is the women seem to have been killed for witchcraft” (Mishra 2013).

Rajasthan is a unique state in India because it is not only the largest but also shares a border with Pakistan. In the last few years, the government passed the Rajasthan Women (Prevention and Protection from Atrocities) Bill that makes it illegal to call a woman a “dayan” or accuse a woman of performing witchcraft that leads to harm. A guilty person can be sentenced to a maximum of three years in prison. If a woman is driven to commit suicide because of witchcraft accusations, the accuser can receive a fine and ten years in prison. The law came in response to decades of assaults, including branding the faces of women accused of witchcraft. According to The New York Times, “The mixing of old superstitions with modern material desires has proved deadly for these women, as many brandings are now done to disinherit them from family property” (Sharma 2012).

Witchcraft and murder is not isolated to these regions of India. A group of villagers in rural Odisha, a state on the East Coast, assaulted and forced three people, including two women, to walk naked through the village. In November 2013, a boy was killed in the same state and police arrested two people accused of the murder for killing him “for the purpose of human sacrifice” (“Boy Killed for Witchcraft” 2013). In 2005, Chhattisgarh, a state in central India, passed the Witchcraft Atrocities Prevention Act to stop the violence and murder. Most recently, in rural Chhattisgarh, two women in their fifties were killed by three boys. According to police, the father of one boy was ill and the other two boys’ fathers were dead. Believing the women were to blame, they “questioned those women about their involvement in witchcraft practices, but they refused to speak. This infuriated the boys who first strangled them and later slit their throats” (Drolia 2013). In 2011, a mother and daughter were accused of being witches in Assam, but police later discovered the accusations were used as a pretext for their rape. According to the Assam government, between 2006 to 2012 there were 105 “witch-hunting” cases with the government planning legislation to curb the violence (Pandey 2013).

With communal violence, a witness to the abuse or murder does not stop the act from taking place. In many instances, groups of villagers are involved in attacking “witches.” Neither the laws nor the presence of journalists have been able to prevent witch hunting. In 2008, a woman was hired by a man to use magic to improve his ill wife’s health. When his wife’s condition worsened he began beating the woman, and five other locals joined in the abuse. She was tied to a tree, and she was slapped repeatedly and had her hair cut as a journalist filmed the events. The cameraperson decided not to attempt to stop the act and filmed it before calling police.

Women are not the only victims in witch hunts. In July 2012, an elderly man and his wife were forced to ingest human urine and excrement in Jharkhand. The two were accused of practicing witchcraft, which supposedly resulted in the death of local livestock. One month later in another village in the state, a man was pulled from his house and buried alive for allegedly practicing witchcraft. In 2013, an elderly man was forced to eat human excrement in Meghalaya, a state in northern India. He was accused of practicing witchcraft when four girls became sick and started having dreams about snakes. The villagers gathered together and decided on his punishment. The assistant village chief defended the action, saying after the event the girls’ health improved.

There is no easy solution to stopping these witch hunts. Groups from all walks of life have attempted to stop the violence. A group of self-proclaimed witches planned to protect women by boarding a boat in Mumbai (Bombay) to send “positive energy” on October 31, 2013. However, Indian rationalists and women’s rights activists have pushed for more concrete efforts. Though they have sought stricter laws to punish violence stemming from witchcraft allegations, several groups want to change perceptions toward women and supernatural belief. Indeed, legislation is not a cure for superstition; improving critical thinking is the key.

Changing attitudes includes exposing fraud and teaching critical thinking about superstition, which sometimes runs counter to long-held indigenous beliefs. Outside intervention in rural communities is frowned upon, and rationalists face difficultly in winning support from people with heavily ingrained beliefs. The Rural Litigation and Entitlement Kendra (RLEK) has been fighting for voting rights, education, and ending bonded labor throughout India. Recently, it has taken an interest in stopping witch hunts through literacy programs in which women directly voiced their complaints to judges and state officials in attendance. The Indian Rationalist Association, which has more than 100,000 members, engages in rural outreach that teaches critical thinking and exposes superstition. While it is difficult or impossible to rid the world of magical thinking and superstition, there are many underfunded groups trying to end modern witch hunts that continue to plague remote parts of India.

Interim Report of the Legal Literacy Camps and State Level Congregation of Women with the Higher Judiciary for Interaction and Solution Finding. 2010. Online at http://jhalsa.nic.in/Report%20on%20Legal%20Awareness%20Camp%20on%20Women%20Empowerment.doc.

Pandey, Alok. 2013. In Assam, a rising trend of murders on allegations of witchcraft. All India (September 4). Online at http://www.ndtv.com/article/india/in-assam-a-rising-trend-of-murders-on-allegations-of-witchcraft-414016.

Ryan Shaffer is a writer and historian. He has a PhD in history and is currently a postdoctoral fellow at the Institute for Global Studies at Stony Brook University in New York.