Food safety is an important and emotionally charged issue. We all want our food to be safe. For most of us, however, the safety of our food is largely out of our hands. Other people grow, pick, clean, inspect, transport, and sell us our food. If you eat at a restaurant, others also prepare the food. It’s understandable that there would be a certain amount of anxiety about what we are eating. Evaluating the safety, healthfulness, and nutritional value of everything we eat is hard work.

While reading food product labels is helpful, sometimes it is easier to substitute buzzwords, reassuring notions that promise wholesomeness such as “all natural,” “organic,” or “gluten-free.” At the same time, the desire for simplicity can motivate some to demonize certain foods or food ingredients. There are those who want to demonize genetically modified organisms (GMOs) and are even pushing for labeling so that the so-called “frankenfoods” can be easily stigmatized.

There is a solid scientific consensus that currently approved GMO crops are safe for human consumption. Despite this consensus, a recent Gallup poll (http://www.gallup.com/poll/6424/nutrition-food.aspx) asked the following question: “From what you know or have heard, do you believe that foods that have been produced using biotechnology pose a serious health hazard to consumers, or not?” Of the respondents, 48 percent said yes, and 36 percent said no.

An ABC News poll (http://abcnews.go.com/Technology/story?id=97567&page=1) reported that 52 percent of those surveyed believe GMO foods are unsafe, 93 percent favor mandatory labeling, and 57 percent said they would use such labeling to avoid GMO food (although California recently rejected a ballot to require such labeling). It is not uncommon for there to be a disconnect between public opinion and scientific evidence. It is particularly easy to stoke fears—and very difficult to quell those fears with abstract scientific evidence, which presents a serious challenge to scientists, science communicators, and those involved in public policy. 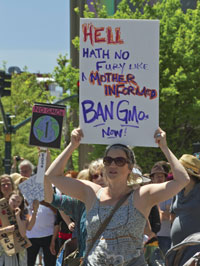 A mother holds a sign saying “Ban GMOs now!” at an anti-GMO/Monsanto rally in Pack Square in Asheville, North Carolina, USA, on May 25, 2013.

Public fear of GMOs is largely based on false premises and misinformation as well as on the highly popular but invalid naturalistic fallacy: the notion that things that are “natural” (a concept that is often poorly defined) are automatically more wholesome and safe than anything synthetic or artificial. GMOs are often thought of as mutants, unnatural, even abnormal. Defenders of GMOs are quick to point out that almost all food consumed by humans has been significantly changed over hundreds or thousands of years through breeding and cultivation. What we eat today bears little resemblance to its naturally evolved ancestors.

GM technology involves various techniques, and we should not conflate them or treat all GMOs as one single entity. Each GMO should be evaluated on its own merits. Some GMOs are created by turning off a normally expressed gene, so there isn’t even the introduction of a new gene. Others, called “cisgenic,” involve introducing genes from closely related species, ones that could be achieved through hybridization and breeding. Still others, called “transgenic,” involve genes from distant species, even crossing to other kingdoms of life (such as taking a gene from a bacterium and inserting it into a plant).

Transgenic genetic modification in particular can create the feeling of contamination. This is largely based on a lack of appreciation for evolution, however. First, all living organisms are the products of mutations. We are all mutants. Genes are changing things, no matter what method is used to bring those changes about. Farmers waiting for generations for plants to fortuitously display a favorable mutation—and then cultivating those plants in order to create a new variety—is just a slower method of causing genetic change.

GMO critics argue that taking genes from distant species is inherently risky because of gene regulation and unforeseen consequences. There is no evidence to support this contention, however. Sometimes genes from distant species find their way into genomes through horizontal transfer. This happens in nature with regularity. Further, people generally underestimate the similarity in genetic information across the tree of life.

The “fish-tomato” is the perfect example of this misunderstanding of evolution. Rumors were spread by anti- GMO critics of a GMO tomato that contained a fish gene. This was meant to shock the public. The Union of Concerned Scientists (a group, in my opinion, with clear ideological leanings) expressed concern (Mother Earth News Editors 2000). “But Jane Rissler of the Union of Concerned Scientists says otherwise: ‘The fact is, it has been done . . . DNAP [DNA Plant Technology of Oakland, California] was the company—that put the fish gene in a tomato.’ Rissler acknowledges that the experiment was halted before any products were brought to market, but, she insists, ‘that is because of the uproar. Believe me, they would be doing it if people were not objecting to it.’”

The real question here is not whether there is a GMO tomato with a fish gene, but who cares? It’s not as if eating fish genes is inherently risky—people eat actual fish. Furthermore, by some estimates people share about 70 percent of their genes with fish (Kettle­borough 2013). You have fish genes, and every plant you have ever eaten has fish genes; get over it.

Some fears are based upon consumption of “mutant” genes themselves. This is unfounded, partly because, as I stated above, all genes are mutants. Also, we regularly consume genetic material in our food. Our bodies handle it quite well without risk. Further, there is at least an order of magnitude more bacterial cells in your body expressing over 300 times as many genes as human genes (Kelvin 2012). You are awash in genetic material from other organisms, and you would not notice an extra “fish” gene in your tomato.

The point of the fish-mato, however, is to provoke a disgusted emotional response, not to elucidate a genuine risk. Perhaps the most legitimate concern about introducing new organisms into the human food chain is the potential for allergies. Some people have food allergies, and new proteins could potentially trigger previously unknown allergies. GMOs, however, do not represent a particular allergenic risk. Testing and monitoring are sufficient to evaluate potential allergies, and so far this potential risk has not manifested.

So, what does the scientific evidence say with regard to the safety of current GMOs? A 2012 statement by the American Association for the Advancement of Science (AAAS) concluded: “. . . Contrary to popular misconceptions, GM crops are the most extensively tested crops ever added to our food supply. There are occasional claims that feeding GM foods to animals causes aberrations ranging from digestive disorders, to sterility, tumors and premature death. Although such claims are often sensationalized and receive a great deal of media attention, none have stood up to rigorous scientific scrutiny. Indeed, a recent review of a dozen well-designed long-term animal feeding studies comparing GM and non-GM potatoes, soy, rice, corn and triticale found that the GM and their non-GM counterparts are nutritionally equivalent” (http://www.aaas.org/news/releases/2012/media/AAAS_GM_statement.pdf).

The National Academy of Sciences/National Research Council agrees (NRC 2004): “To date, no adverse health effects attributed to genetic engineering have been documented in the human population.” The World Health Organization also agrees (WHO 2005): “GM foods currently traded on the international market have passed risk assessments in several countries and are not likely, nor have been shown, to present risks for human health.” As referred to by the AAAS, reviews of animal feed studies have concluded (EFSA 2008): “Results obtained from testing GM food and feed in rodents indicate that large (at least 100-fold) ‘safety’ margins exist between animal exposure levels without observed adverse effects and estimated human daily intake. Results of feeding studies with feed derived from GM plants with improved agronomic properties, carried out in a wide range of livestock species, are discussed. The studies did not show any biologically relevant differences in the parameters tested between control and test animals.”

Even the European Union, which is politically not favorable to GMOs, had to acknowledge in its review of the research (European Commission 2010): “The main conclusion to be drawn from the efforts of more than 130 research projects, covering a period of more than 25 years of research and involving more than 500 independent research groups, is that biotechnology, and in particular GMOs, are not per se more risky than e.g. conventional plant breeding technologies.”

Not only is there extensive independent research and evidence for the safety of GMOs generally and specific GMOs, but this evidence is greater than for any other food crop.

For anti-GMO activists, apparently, no amount of evidence is sufficient. The precautionary principle, that we should err on the side of caution, especially with new technologies, is perfectly reasonable but can be taken too far. There is no such thing as zero risk or absolute proof of the absence of any risk or negative effect. This is true of everything we do, everything we consume, every medical intervention, and every technology.

However, it is easy to seem reasonable by invoking the precautionary principle, to simply ask for reassurance of safety and more testing. This plays well with the public; everyone wants to be safe. The real question is, however, where are our thresholds for safety? How much evidence do we need? Those who are ideologically anti-vaccine play this game well, always calling for more research, insisting on zero risk, and asking specifically for the kind of research they know will never be done (such as for ethical reasons). Anti-GMO activists are playing the same game. Despite the overwhelming evidence for the safety of GMOs, more than for any other food, it’s never enough. They want decades-long prospective studies looking at every possible negative outcome—but just for GMOs, not other foods. Like the anti-vaccinationists, they set the bar as high as necessary so that, if followed, GM would effectively be killed. They don’t want safe GMOs; they want no GMOs.

Genetic modification is easy to portray as a new and scary technology, but fearmongering is largely based on misinformation, a misunderstanding of evolution and our place in the natural world, and vague fears of contamination. In reality, GMO safety testing is extensive and has not uncovered any safety concerns for current GMOs. There are other issues with GMOs that are worth discussing, but fears of adverse health effects are not legitimate.

Steven Novella, MD, is an assistant professor of neurology at Yale University School of Medicine. He is the host of the Skeptics’ Guide to the Universe podcast, author of the NeuroLogica blog, executive editor of the Science-Based Medicine blog, and president of The New England Skeptical Society.