In continuing our discussion on “mystery” paintings from the past: a special place is held by paintings that are said to hold hidden meanings—especially when they do.

The Ambassadors by Hans Holbein the Younger (1533) is a highly symbolic painting. The two diplomats depicted, Jean de Dinteville and Georges de Selve, are portrayed with one in secular clothes and the other in clerical robes. The objects on the table (both celestial and terrestrial globes) as well as the oriental carpet allude to the exploratory nature of the professions of the two subjects. However, there are also various measuring instruments for scientific and technical symbols of materialism, along with books and symbols of religious knowledge. Therefore, it could be a symbolic representation of the union between capitalism and the church. The lute with the broken string, however, represents discord. The Lutheran hymnbook might suggest a conflict between academics and clergy.

Without a doubt, though, the most mysterious symbol within the frame is the strange figure stretched on the floor. When one looks at the picture from the right side and a few feet away, the deformation disappears, and the picture appears for what it is in reality: a human skull. The technique used is known as “anamorphosis,” already described by Leonardo, and the meaning of the skull may be the classic memento mori (literally: “remember that you must die”). However, it remains to be seen why Holbein gave so much space to it in his painting. Perhaps the artwork was hanging along a staircase, in order to surprise those ascending the stairs who suddenly saw the skull, or maybe it meant that everything (the good clothes, tools, the luxury of the room), in spite of their beauty, is destined to dust. The only possible salvation is to be found in the crucifix, almost hidden in the top left of the canvas. Or, of course, perhaps Holbein simply wished to demonstrate his technical skills in order to assure further commissions.

A Trio of Delicious Puzzles 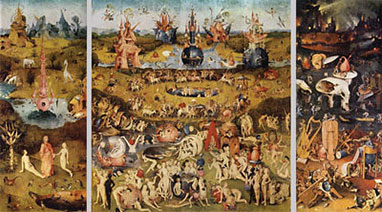 The Garden of Earthly Delights by Hieronymus Bosch

Among the paintings whose symbolic interpretation is genuinely difficult and debated is the triptych known as The Garden of Earthly Delights painted by Hieronymus Bosch between 1480 and 1490. The large picture (220 cm by 389 cm), divided into three parts, is considered the first true surrealist painting of history. It is thought that it depicts, from left to right, the creation of Adam and Eve, the Garden of Earthly Delights, and, ultimately, hell.

Scholars have often interpreted the complex acts depicted therein as a warning to men about the dangers of the temptations of life. Over the centuries, however, the meaning of individual themes and fantastic figures, and the connection between them, has been widely debated. In particular, the central panel divides critics. There are those who believe that it contains a moral lesson for man about the deleterious consequences of the pleasures of the senses and the transience of life, and then there are those who consider it a view of paradise lost. Others, however, assuming that Bosch was a member of the Christian sect of the Adamites, view the panel as an ideal representation of free love, where sexuality is not intended as sin but as pure joy and ecstasy. None of these hypotheses, however, is totally convincing. Bosch himself—about whose life little is known—remains an unsolved riddle.

Among the most bizarre and extravagant artists in history is Giuseppe Arcimboldo, who produced complicated puzzles in which compositions of fruits, vegetables, flowers, birds, fishes, and other objects end up turning into original shapes and human faces. One of the most famous examples is the Vegetable Gardener, a bowl containing several vegetables that, once inverted, shows the placid and fat face of the titular Gardener.

For his work, Arcimboldo recovers Leonardo’s physiognomic surveys in order to create paintings that seem simply grotesque and playful caricatures. But, just as the pictures he paints change their meanings by the assumption of a different point of view, so the true meaning of such paintings is deeper than it appears on the surface. Close to the magic-cabalistic culture of the sixteenth century, Arcimboldo, who worked for a long time as a painter at the Habsburg court in Prague, a city believed to be the European capital of esotericism at the time, was trying to revive in his paintings the ancient philosophy of “solve et coagula,” decompose and recompose, typical of alchemy. The choice of individual objects used, such as the vegetables of the Gardener, hints to a hidden meaning related to the theories of the elements, the humors, and the five senses.

To see the ancient paintings as puzzle games in which one can search for ambiguous messages and double or hidden meanings, however, is a very modern trend, which inevitably leads to interpretations so outlandish as to be often unfounded. It’s the case, for example, of The Shepherds of Arcadia by Nicolas Poussin, painted in 1640, and mentioned in relation to the “treasure” of Rennes-le-Château. The group of idealized shepherds in classical antiquity, grouped around an austere tomb on which is written the phrase “Et in Arcadia ego” (literally: “I too was in Arcadia,” an ancient form of memento mori), was originally inspired by a similar picture painted by Guercino. However, since the 1980s the work has been reinterpreted by pseudohistorians who imagined the painting loaded with clues about the alleged descendants of Christ, very similarly to what happened to Leonardo’s Last Supper.

In particular, the words “Et in Arcadia ego,” duly rearranged (and with the addition of a few letters here and there) were transformed into “I Tego Arcana Dei,” meaning: “Go away! I hide the mysteries of God.” As if to say that that could even be the tomb of Jesus after he had escaped the Crucifixion and retired with his family on the hills of France to die an old man. Poussin, in short, would have been the member of an esoteric society that intended to leave a hidden trace of this secret in order to hand it down to posterity. Despite the fact that hiding clues in paintings is often invoked in legends relating to hidden treasures, it appears that there are no examples of a similar practice anywhere. Still, the idea of the “encrypted painting” persists and thrives. 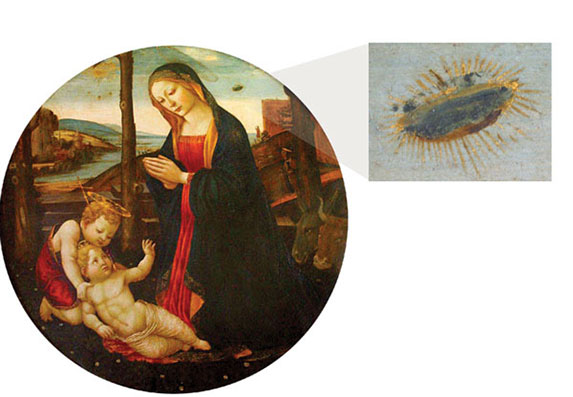 The Madonna and Child with St. John the Baptist. The luminous cloud in the background (enlarged, inset) has religious symbolic meaning but has nothing to do with a starship as some UFOlogists contend.

A UFO in the Picture?

If a modern observer can find just about anything in a painting dating to five or six centuries ago, why not look for a flying saucer? That’s precisely what happened with several Renaissance paintings. One of the most famous is the Madonna and Child with St. John the Baptist attributed to Sebastiano Mainardi. The picture is dated to the end of the fifteenth century and is today at the Museum of Palazzo Vecchio in Florence. At the top of the painting, behind the shoulders of the Madonna, stands a strange oval shape suspended in the sky. According to some UFOlogists this is “an object plane, lead-gray, tilted to the left and has a ‘dome’ or ‘turret,’ apparently identifiable as an oval-shaped steering wheel in motion.”

To understand what this or any other ancient paintings depict in reality, though, it is essential to understand how painters worked in the past. And, usually, no one who sees UFOs in paintings bothers to inquire about the possible symbolic meanings of these strange elements in the art of that period. The flying object in Mainardi’s painting and others similar to it, in fact, is nothing more than a “luminous cloud.” At the time, in the case of worship paintings, there often was in the sky a bright cloud, or an angel, as narrated in some apocryphal Gospels. Even the man on the right of the painting, who covers his eyes looking into the sky, is a characteristic feature of this type of picture. It seems, however, that rather than looking at the cloud the man directs his stare toward the Star of the Nativity and the three small stars (top left in the picture), symbols of the threefold virginity of Mary: not surprisingly, these as well have been interpreted by some as “starships.”