This article originally appeared in the January / February 2015 issue of Skeptical Inquirer.
Subscribe today and read this entire issue. You will also gain access to our full archive, dating back to 1976.

During Sylvia Browne’s decades-long career offering psychic readings and doing television appearances, she made numerous claims about working with law enforcement to solve crimes. In an age before the Internet, fact-checking by television and newspapers was more labor intensive. It was difficult to find sources to support or deny many of her claims. While several articles in the Skeptical Inquirer have cast doubt on her psychic abilities, Browne defended herself by citing her “work” on cases and giving the media endorsements from seemingly
respectable law enforcement members, such as former Federal Bureau of Investigation (FBI) agent Ted Gunderson. Recently obtained FBI files shatter her insinuation that she had a relationship with federal law enforcement and show that the only interest the agency had in Browne was investigating her for fraud.

Records about a person in possession of an investigating government agency, such as the FBI, are available with the person’s permission or if they are deceased. In all likelihood, Browne would not have consented to the release of her FBI file given her refusal to allow Robert Lancaster, of StopSylvia.com, to post a transcript online that her own office sent him in 2007 (Lancaster 2007a). In her haste to refute claims from an ex-husband about an alleged lack of higher education credits, Browne’s office sent Lancaster her St. Teresa’s College (now Avila University) transcripts. The transcripts, according to Lancaster, did show Browne’s ex-husband was incorrect about how long she attended college. Yet unfortunately for Browne, that transcript also demonstrated that she did not complete college and proved her often-made claim about having a higher education degree was false. Given Browne’s reluctance to make records her office sent to a critic publicly available, she probably would not have been willing to allow the release of her law enforcement records. Following her 2013 death, anyone can now obtain the government files concerning Browne.

I filed a Freedom of Information Act request with the FBI asking for documents about Browne, using her date of birth under her previous legal last name of “Brown” and her later addition of “e” to the name. I asked for all files as well as “any details about her alleged psychic abilities, help on missing person cases, any investigations or information, and alleged help to Ted Gunderson.” Previously John Greenewald’s The Black Vault, an online collection of government documents, discussed obtaining Browne’s FBI files on a federal investigation and details from the FBI memoranda (Greenewald 2014). Greenewald’s website did not make it clear whether it posted all the FBI’s files or exactly what was requested from the agency. Therefore, I decided to request all the files about Browne. I also asked for anything about her alleged missing persons work and any information about her and Gunderson. The FBI, after asking for documentation that Browne was deceased, sent me two electronic files on a CD-ROM. The first file totals nineteen pages; the second had thirty-three pages that relate to a criminal investigation. A review of pages shows that Greenewald’s release of documents, totaling fifty-two pages, was the FBI’s entire Browne collection. 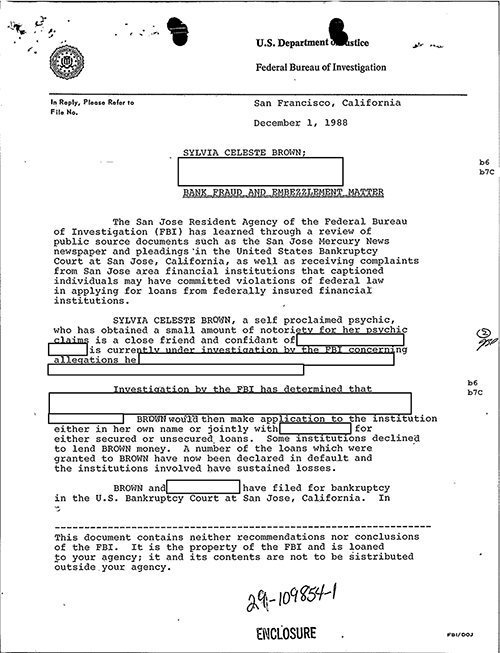 One of the FBI’s documents on Sylvia Browne.

Prior to her death, Browne repeatedly claimed to have worked with law enforcement to solve criminal cases. While there is no doubt Browne commented on criminal cases during her television appearances and directly to family members of the missing and deceased, her work with law enforcement is less frequent and more dubious. For example, in her November 2004 appearance on The Montel Williams Show, Browne said: “I remember when I was working on the Bundy case. . . .” Outside of this off-hand comment, there is no evidence to affirm that Browne worked on a “Bundy” case—much less the case of serial killer Ted Bundy, whose capture was not connected to any psychic. Nevertheless, Browne did work with local police on occasion. In 1997, for example, Browne charged the Thibodaux Police Department $400 for a psychic reading on a murder case, but when the murderer was finally caught a decade later Browne’s “work” did not contribute to solving or convicting the killer (Shaffer 2013). In 2007, CNN’s Anderson Cooper investigated Browne in the aftermath of her false prediction that Shawn Hornbeck was deceased. Cooper told his audience:

Cooper then asked his guest James Randi about Gunderson’s statement, “Now, that’s from a former senior FBI official. Are you saying he’s wrong?” Randi, who was not aware of Gunderson or the conditions under which he worked with Browne, replied in part, “He has to judge these things much more carefully.” Gunderson, who died in 2011, was indeed an FBI agent (Associated Press 2011). Yet he earned most of his public fame during his retirement by promoting numerous conspiracy theories, including “child slave labor for underground alien-controlled facilities” (Gunderson 2007; Lancaster 2007b). However, there is no documentation released by the FBI to support the claim that Browne conducted any psychic readings for the FBI, either directly or indirectly. Moreover, Gunderson’s name appears nowhere in her FBI file, and the topics in the FBI release do not discuss working with the FBI. Thus, there is no evidence from the records that Browne was involved with the agency. Assuming Browne worked with Gunderson, it appears to have occurred after he retired from the FBI and when he was investigating aliens, “Satanic” child abductions, and numerous other conspiracies.

Browne also claimed to have given the FBI testimony in March 1993 about the terrorist attack a month earlier on the World Trade Center (Cooper 2007). Like the previous assertion, there is no FBI record to support this; World Trade Center is never mentioned in the files. To ensure that was the case, I filed another Freedom of Information Act (FOIA) request with the FBI asking specifically “for any documents or video” the agency has about Browne’s “interviews with the FBI regarding the 1993 World Trade Center attack.” The FBI response was: “We conducted a search of the Central Records System. We were unable to identify main file records responsive to the FOIA.” If the FBI did interview Browne about the terrorist attack, there is no record of it in the FBI’s central database. If such an interview occurred then, it happened the month she pled to a securities crime in a California court and after the FBI investigated her for federal crimes.

Browne made a good living by conducting private readings, doing public lectures, and selling books, which earned millions of dollars each year at its peak. Critics dogged her career, pointing out false predictions and even highlighting her March 8, 1993, no contest plea against the State of California for “selling securities without a permit,” which earned her one year probation and an order to pay restitution (Romano 1993). What Browne’s FBI file lacks in information about her psychic work it makes up for in details about criminal investigations. The newly obtained FBI documents, which describe Browne as “a self proclaimed psychic,” show that the FBI closely investigated Browne and her organization, the Nirvana Foundation for Psychic Research, in the 1980s for “violations of federal law in applying for loans from federally insured financial institutions” in the amount of $1,253,933 and caused businesses “sustained losses” (FBI Document 29-109854-1 1988).

The documents show that the FBI examined Browne’s agreements with several banks as well as her 1984, 1985, and 1986 tax returns. In particular, the government was interested in Browne and an unknown person using “fraudulent documents, including income tax returns and financial statements to enhance her net worth in making these loan applications” (FBI Document 29A-SF-10056 1989). Browne then used the “loan proceeds to support an extravagant lifestyle.” The FBI also had Browne’s signatures on the documents examined to confirm it was her handwriting. In May 1991, the FBI, in a highly redacted document, stated: “Investigation in this matter has determined that [redacted] did prepare fraudulent documents, enhancing the financial statements and tax returns of SYLVIA BROWN and [redacted] which documents were then utilized by BROWN in obtaining loans from federally insured institutions” (capitals in original; FBI Document 29-109854-4 1991). Under a heading “bank fraud and embezzlement,” the FBI reported that the “Internal Revenue Service . . . also has investigated BROWN, including her tax exempt organization known as the Nirvana Foundation.” Ultimately, the U.S. Attorney declined to prosecute the FBI’s case due to “insufficient evidence to indicate criminal intent on the part of BROWN” and the FBI stopped investigating.

Most of the remaining FBI files are copies of Browne’s loan applications that include financial details and correspondence from Browne about the loans on Nirvana Foundation letterhead. These documents reveal what she claimed was her income before her bestselling books and weekly appearances on The Montel Williams Show during the 1990s. One Pacific Valley Bank document Browne signed in 1984 listed her total assets at $3,159,500; another document for California 1st Bank signed by her in 1986 listed $4,215,000. In terms of personal income, Browne signed a notarized document that her individual income tax return in 1983 stated her net income was $93,474 and her individual income tax return in 1982 had her net income at $105,553. One must keep in mind that Browne, as the FBI described her, in the 1980s obtained “a small amount of notoriety from her psychic claims.” It was after her 1993 no contest plea that she became an international psychic star.

Sylvia Browne died in November 2013, but her organization continues to live on with adherent supporters. Despite numerous media outlets citing her poor accuracy rate and mentioning that she inaccurately predicted the age at which she would die, her funeral saw mourners who praised Browne. One woman claimed she paid Browne $30 in 1974, who, in turn, described a house she would buy (Kurhie 2013). Even without Browne, the business continues promoting her books and selling memberships for her “Inner Circle.” Chris Dufresne, her son, continues offering psychic services and using SylviaBrowne.com to promote his psychic readings by telling supporters to contact the “Sylvia Browne Corporation” for reservations (“Psychic Readings” 2014). When people see that Browne built a support base, earned millions of dollars, and regularly appeared as a psychic on television, the details of her numerous failed predictions and various criminal investigations should encourage skepticism whenever someone else claims to be a psychic or medium. For those who will believe without objective evidence, it won’t. Yet, for those who care about details and facts, it will.

Ryan Shaffer is a writer and historian. He has a PhD in history and is currently a postdoctoral fellow at the Institute for Global Studies at Stony Brook University in New York.

Science and Skepticism, the Big Picture

Diet-Heart: A Hypothesis in Crisis? Part 1: From Proposal to Paradigm to Policy