Once again, farmer Paul Trent’s famous UFO photos from McMin­nville, Oregon, are a hot topic in UFOlogy. Kevin Randle discussed the photos on his blog A Different Perspective, and a torrent of comments from researchers followed. Not just frothy opinion but highly detailed, meticulous comments about the camera angle and position, the weight and size of the hypothetical model, the load on the wires and a possible bend in them, etc. Ultimately this is important, but such matters are unlikely to give us a final answer. There is one thing about this case that everyone can probably agree on: as Randle says, “There are only two conclusions to be drawn about the pictures taken in McMinnville, Oregon. They either show a craft from another world, or they are a hoax. I do not see a third possibility.”

Partly in response to this, I wrote a long special report on the current status of the Trent photos on my BadUFOs blog. Space does not permit putting it in this column, so I include only the highlights here. You can read the long version, and see all the photos, at http://tinyurl.com/BadUFOsTrent.

On May 11, 1950, farmer Paul Trent of McMinnville, Oregon, snapped two photos of an object that he claimed was a flying saucer (the term UFO hadn’t been invented yet). There are inconsistencies in Mrs. Trent’s accounts of where her husband was when the object was first spotted and who went inside to get the camera. The Trents did not immediately tell anyone about the photos or rush them off to be developed. Instead, the film containing the invaluable flying saucer photos was left in the camera until Mother’s Day, so that a few unexposed frames would not be wasted. More general information on the photos is on my website at http://debunker.com/trent.html. 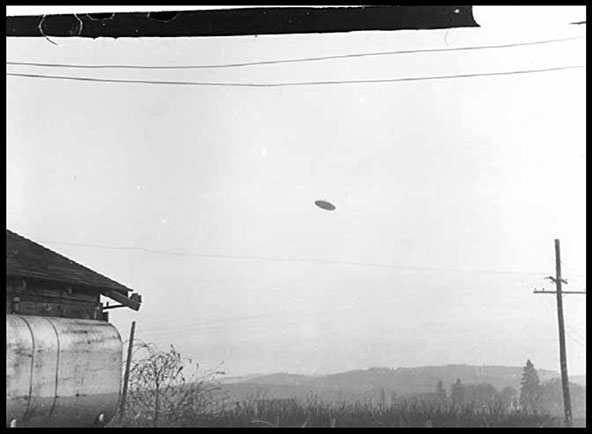 The first of Oregon farmer Paul Trent’s two photos of a supposed “flying saucer,” May 11, 1950.

The famous (and to some, infamous) Condon Report included the Trent photos in its section of Photographic Case Studies as Case 46 (http://goo.gl/vaKe81). The principal investigator was William K. Hartmann—who, incidentally, was the first person to come up with the presently accepted theory about the origin of the Earth’s moon. This analysis attracted a lot of attention from UFOlogists, particularly because of Hartmann’s conclusion that

This is one of the few UFO reports in which all factors investigated, geometric, psychological, and physical appear to be consistent with the assertion that an extraordinary flying object, silvery, metallic, disk-shaped, tens of meters in diameter, and evidently artificial, flew within sight of two witnesses. It cannot be said that the evidence positively rules out a fabrication, although there are some physical factors such as the accuracy of certain photometric measures of the original negatives which argue against a fabrication.

Hartmann acknowledges, however, that
a fabrication is possible:

The object appears beneath a pair of wires, as is seen in Plates 23 and 24. We may question, therefore, whether it could have been a model suspended from one of the wires. This possibility is strengthened by the observation that the object appears beneath roughly the same point in the two photos, in spite of their having been taken from two positions.

• The object is translucent, allowing light from the sky to pass through.

• The object has a mirror surface at the bottom, thus we are seeing a reflection of the bright ground and not a shaded surface.

• The underside of an object suspended several feet above the ground from the wires receives much more illumination than that of a tank near the ground, next to a wall. (I would expect this to be true.)

There are very distinct shadows on the garage in both photos, although the Trents claimed that the photos were taken around sunset. The problem is that the wall faces east, and the sun is in that position (about 90 degrees azimuth) at about 8:20 am PDT. If the photos were actually taken in the morning, then the Trents were lying about the circumstances of the incident. I found that, measuring the shadows, we can greatly restrict the size of the object casting the shadows. In fact, it is so small that it is almost certainly less than one degree. This eliminates every possible source of illumination except the sun.

In 2004, researcher Joel Carpenter (1959–2014) created a website on the McMinnville photos, making a very good case that the object was directly beneath the overhead wires and close to the camera. He suggests that the object was a mirror from an old truck. I have restored Joel Carpenter’s original McMinnville photos website (changing only the links), and placed it on the Internet Archive at http://tinyurl.com/CarpenterTrent.

One of Carpenter’s findings is that Trent’s camera was surprisingly close to the ground when the photos were taken. For some bizarre reason, Trent did not stand up to photograph his UFO, but instead crouched down. Carpenter explains,

Instead of moving toward the object and shooting the photos from eye level in the unobstructed front yard, he shot the two photos up, from a very low level, from the back yard. For reasons explained above, it seems likely that he actually used the viewfinder on the body of the camera while kneeling. The overall geometry of the positions and the attributes of the camera suggest that he was attempting to frame a nearby object in such a way as to maximize the amount of sky around it and enhance its apparent altitude.

In other words, Trent walked away from where the UFO was supposed to be and instead walked toward where the presumed model was hanging from the wires and crouched down close to the ground to make his “UFO” appear distant.

Since the camera moved a significant distance between Photo 1 and Photo 2, can the two Trent photos possibly be viewed as a stereo pair, to reveal the object’s distance? In 2010 an anonymous researcher calling himself Blue Shift did so on Above Top Secret (http://goo.gl/OEsXCi). When you cross your eyes to see the image in 3D, the “UFO” is seen to be small and relatively close to the camera compared with the distant hills. Another way of demonstrating the same thing: a montage by David Slater demonstrates that when the two Trent photos are overlaid so that the wires are lined up, the images of the “UFOs” line up as well (http://goo.gl/5JwJ6e). Both these demonstrations show that the “UFO” appears to be fixed with respect to the overhead wires.

In 2013 a group of French skeptics (IPACO) did an in-depth investigation of the McMinnville photos (http://www.ipaco.fr/ReportMcMinnville.pdf). They began with the usual description of the line of sight to the object in each photo, presumed suspension methods, etc. They concluded that the object is a small model.

More interesting is the second part of the report, completed two months after the first part: Evidence of a Suspension Thread (page 29 of the IPACO report). They do not claim to detect the suspension thread directly but instead statistically. They conclude, “For the TRNT1 picture, the presence of a negative peak (thread darker than the sky) was clearly observed which matched exactly to the supposed attachment point, with a significant difference of 2,38 sigma, for a tilt angle equal to -11°. . . . Application of the same method to the second picture TRNT2 provided comparable results, with a tilt angle of -10.29° and results of over 2.5 sigma.”

Now, another researcher has weighed
in. Jay J. Walter of Phoenix, Arizona, the author of the suspense horror novel Blood Tree, did his own investigation. Working from high-resolution scans of first-generation prints that I sent him (scans I have now posted on the Internet Archive for anyone to research at http://archive.org/details/TrentHighResScans), he did his own photo enhancement using the venerable program ArtGem. He said that even using a 4.2ghz quad core 64bit processor with 8 gigs of system RAM, he was still getting “out of memory” errors. However, he persevered and produced a series of photos appearing to detect portions of a suspension thread above the object in both photos. The purported string cannot be seen across its entire length, which is consistent with the French skeptics being able to detect it only statistically. It is significant that Walter and the French team were working with different scans.

Another of Walter’s purported discoveries is what he calls a “logo,” an apparently flat area with two holes, where it appears a logo plate might be attached or possibly even a handle. Is this real, or is it simply “pareidolia”—seeing a pattern where none exists? Confirmation is needed.

Walter suggests that the object in question is an appliance motor shroud, approximately eight inches in diameter. “I think Trent walked to the garage one evening, tied a string to an appliance motor shroud via an old bolt, tossed the shroud over a wire and tied the other end of the string to an anchor near the ground, then took the two pictures. Logical, practical, and so much less effort for him than other theories. People just do what they do and Trent wasn’t going to go to too much effort just to fool his banker buddy.”

Do these new findings finally debunk the Trent photos? They would, provided they can be independently confirmed by other researchers, using other high-resolution scans from first-generation prints or the original negatives. Until then, people will continue to argue about such matters as the gauge of the wires and whether the model, if it was a model, would have to be five or six inches in diameter.

Science and Skepticism, the Big Picture

Diet-Heart: A Hypothesis in Crisis? Part 1: From Proposal to Paradigm to Policy