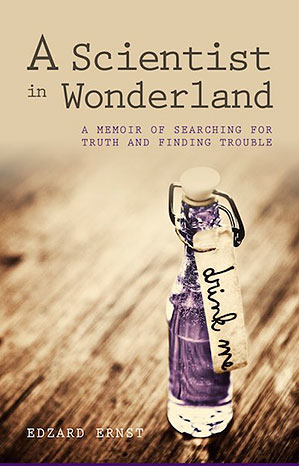 If you have any interest whatsoever in complementary and alternative medicine (CAM), Edzard Ernst’s new book A Scientist in Wonderland is a must-read. If you are already skeptical regarding CAM, you will enjoy an entertaining and informative insight into the life of a man who can reasonably claim to have carried out more high-quality research in this area than anyone else alive.

If you are a believer, there is even more reason for you to read this book. In it, Professor Ernst clearly presents his reasons, based upon sound empirical evidence, for concluding that the vast majority of CAM treatments are therapeutically worthless (over and above producing placebo effects) and that they can in some cases actually be dangerous. Furthermore, the spurious reasoning of CAM supporters is exposed for what it is, and their dubious tactics to try to silence Ernst are put under the spotlight.

The book is first and foremost a memoir. Even those of us who have long followed Ernst’s research may well find a few surprises here. Ernst was born into a poor family in Germany just after World War II. His mother, described as “a most determined and in many ways an endearingly eccentric woman,” was an enthusiastic user of alternative medicine, and thus the young Ernst never questioned whether or not such treatments actually had any real therapeutic value or not. He simply accepted that they did work (for all the reasons that will be familiar to regular readers of this magazine).

Ernst’s first passion in life was not science; it was music—specifically jazz. He admits to being rather lazy (and at times rebellious) at school, and as a young man was much more interested in listening to and playing jazz and generally having a good time than studying. Fortunately, his mother gently pushed him in the direction of applying himself in order to get into medical school, assuring him that it would provide him with a solid profession to fall back on “if you ever get fed up with making music.”

If you were to assume that entering medical school provided the spark that ignited Ernst’s passion for science, you would be wrong. In common with many medical students, he found that the essential requirement to master vast amounts of factual material completely precluded any time for reflection, much less the application of critical thinking.

After six gruelling years at medical school, Ernst eventually qualified as a “real doctor” and got his first job—in Germany’s only homeopathic hospital. He admits to actually knowing next to nothing about homeopathy when he took up the post (homeopathy had rightly been dismissed as nonsense by his professor of pharmacology at medical school). He read up on homeopathy and quickly realized that it had absolutely no plausible scientific basis—and yet he saw on a daily basis that many patients appeared to benefit from it. When he asked the medical director at the hospital what caused this improvement in their patients, he was surprised by the candid reply: “It’s mostly due to the fact that we discontinue all the useless medications they had been taking previously.”

Ernst was employed in many different and varied medical institutions over the following years in Germany and Austria, but it was not until he took up a post at St. George’s Hospital in London that he truly became passionate about research, albeit in the field of blood rheology as opposed to CAM. He found being immersed in the world of scientific research exhilarating, especially the pervasiveness of critical thinking. However, he was to take up several more posts before finally landing the position that was to bring him to the attention of most readers of this magazine. Each of these appointments, in one way or another, prepared him for what was to be his final appointment before retirement.

It was in September 1993 that Ernst arrived in England, with his ever-supportive French wife, Danielle, to take up an exciting new post as the Laing Chair in Complementary Medicine at the University of Exeter. Both were already devoted Anglophiles by this time, not least because they had met and fallen in love in England many years earlier. It seems to me that the good professor has a very British sense of humor that shines through in this book. He does not believe in the rigid hierarchies based upon authority that characterized some of the continental institutions in which he had worked but instead engages in constant questioning (and sometimes gentle ridicule) of sacred cows of all kinds.

As such it should come as no surprise that he did not quite behave as many people expected him to after taking up his post in Exeter. He was committed to carrying out high-quality research into the efficacy and safety of CAM, not simply promoting its use in an uncritical manner. This admirable attitude won him much respect in the eyes of fellow scientists and the wider skeptical community. Ernst and his team published literally hundreds of papers during his time at Exeter, attracting huge interest from the media and doing vast amounts in terms of educating the wider public about the true nature of CAM.

However, his approach also won him many powerful enemies among supporters of CAM—most notably Prince Charles and his followers. In time, there were also those in positions of power at the University of Exeter whose fear of offending the British royal family led them to take steps to silence Ernst’s entirely valid criticisms of CAM. Eventually, his unit was run down and he was, after almost two decades, eased out of his post.

I am pleased to say that this has not had the desired effect of silencing Professor Ernst as this book shows. Long may this man speak truth unto power!