Dr. Paul Offit, director of the Vaccine Education Center and chief of the Division of Infectious Diseases at Children’s Hospital in Philadelphia, is one of the world’s leading proponents of vaccinations and good public health practices. His book Deadly Choices was subtitled “How the Anti-Vaccination Movement Threatens Us All.” He’s also author of Do You Believe in Magic? The Sense and Nonsense of Alternative Medicine and most recently (March 10) Bad Faith: When Religious Belief Undermines Modern Medicine. In an interview with Lindsay Beyerstein on the Center for Inquiry Point of Inquiry podcast, Offit spoke about the early 2015 measles outbreak at Disneyland, the anti-vaccination movement, and the importance of vaccination. 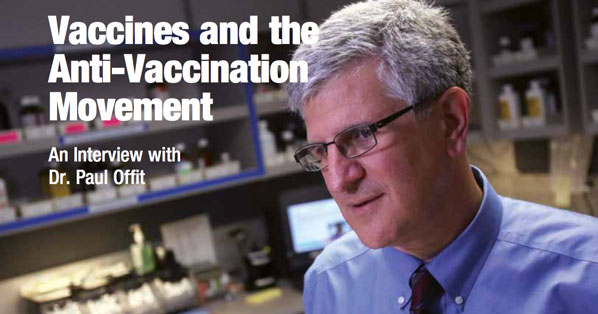 Lindsay Beyerstein: Let’s talk about the flu vaccine this year. What happened with it?

Dr. Paul Offit: I would say we’re generally pretty good at figuring out what strands are about to circulate, and we do that usually a few months before we make the vaccine. We predicted basically what’s circulating in South America because usually that’s what comes up here and that was what was circulating. The problem is that one of the strands, the H3N2 strand, mutated enough away from what the vaccine strand was so that protective efficacy this year was woeful. It was in the 23 percent range, which is terrible. I don’t remember a year like this actually, since I started to follow this for the last twenty years. This, I think, is the worst year we’ve had for protective efficacy in my memory.

Beyerstein: How do you
calculate protective efficacy?

Beyerstein: What is herd immunity, and what kind of vaccination rate do we need to sustain to keep herd immunity strong for measles?

Offit: Herd immunity just means that enough people are vaccinated in the population so that the virus or the bacteria has a lot of trouble spreading from one person to the next because so many people are vaccinated. In terms of the level of herd immunity that’s necessary, it depends on the nature and contagiousness of the virus or bacteria you’re trying to prevent. For these highly contagious viruses like measles, mumps, or chicken pox, you really need to have between 92 and 94 percent of the population immunized in order to prevent that spread. 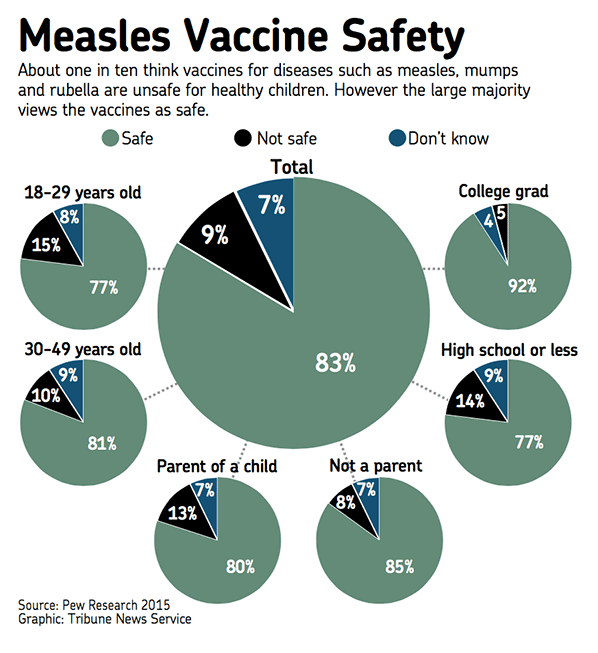 For diseases that are less contagious, you don’t need as high of a percentage because what happens is when herd immunity starts to fade, you see exactly what you’re seeing now—which is the most contagious diseases come back first: measles, mumps, whooping cough. It’s just what you would expect.

Beyerstein: A lot of people put their children at risk for religion. It seems like it’s perfectly compatible with a lot of religious beliefs. There are people who recruit their children to be suicide bombers.

Offit: I don’t know why. If you look, for example, at the followers of religions such as Christian Scientists, often these things are done in the name of Jesus, and I don’t get that. I’m not a religious person but if one reads the New Testament, you can’t help but be impressed by the figure described as Jesus. “Verily, I say unto you, what you do unto the least of my brethren, you do unto me.” You put that on the entrance of every children’s hospital in the world. This is a man who stood up for children at a time when infanticide was common, when abandonment was common, when child abuse was the crime embraced by the Roman Empire. You could argue independent of whether you believe in God or you believe Jesus was the son of God, the way Jesus is described in the New Testament he is a breakthrough character in terms of his defense of children. I don’t get it.

Beyerstein: He also was pro-healing, and he never said you shouldn’t have any healing except for me.

Offit: That’s right. When you’re sick, go to the doctor. In three of the four gospels that made it into the New Testament, that’s what he says. I don’t get it. What bothers me is when we had that outbreak in Philadelphia, it would have been nice for somebody who represented the church to stand up and say, “This is nuts. This is a distinctly un-Christian thing to do.” That would have helped. I think our respect for religion is great to a point, but this is that point.

Beyerstein: Many of the anti-vaccination parents are well educated and affluent. Why do you think that they’re such fertile ground for these crazy ideas?

Offit: I think they don’t fear the disease. I think it’s that simple. I think in Southern California, you’re living this wealthy, upper middle class, upper-class environment. You’re eating well, you’re exercising. You don’t see this disease so you think this is not going to happen to me, until it happens to you. That’s the way it always works with these diseases.

Beyerstein: There is this group that you’ve identified as the vaccine hesitant parents, and you said that they have a big role to play in improving public health outcomes for vaccinations. Who are they and what can we do to get them on our side?

Offit: I think that’s most people. We talk about the anti-vaccine movement, but the true anti-vaccine movement are the professionals—Barbara Loe Fisher at National Vaccine Information Center or J.B. Hanley at Generation Rescue, or people like Jenny McCarthy—but some are conspiracy theorists. They believe that there is a conspiracy between or among the federal government and the pharmaceutical industry and doctors to sort of push product, but you’re not going to convince them. I think that’s not most people.

Most people, there’s just an anti-vaccine sentiment. They don’t see the disease; they’re not scared of the disease; they’ve read scary stuff on the Internet. They’re not sure what they should do. I think those people are, for the most part, convincible. I think we just have to be a little more compelling in the way we try and convince them.

Beyerstein: Are people more friendly toward, say, polio vaccinations because they know that polio means paralysis? I get the sense that people are less likely to want to refuse that than a measles vaccine or a diphtheria vaccine, or pertussis, that they don’t even know what the disease really is.

Offit: It’s interesting, isn’t it? People are hesitant to get an HPV vaccine, human papilloma virus vaccine, to prevent a disease that causes twenty-five thousand cases of cancer, four thousand deaths a year. Yet, they’re happy to get a polio vaccine. We haven’t had a case of polio in the United States since 1979. You’re right. I think we’re not very good at judging risk.

Beyerstein: There was an op-ed in USA Today recently that was arguing that parents who refuse to vaccinate for mandatory vaccines should be jailed. Do you think that is acceptable or necessary?

Offit: No, I think that goes too far. We have three ways that you can choose not to get a vaccine in this country and one is a medical exemption. I think that’s fine. I think this so-called personal belief exemption is nonsensical. Vaccines aren’t a belief system. They’re an evidence-based system. There’s abundant evidence that shows they are what they claim to be. Again, I think a religious exemption is also nonsensical because it’s an unreligious act. So don’t give it the legal protections of religion. The notion that you’re allowing people to put children at risk in the name of religion is, I think, averse to all, frankly, religions. I just wish we’d be more honest about this. If people choose not to get vaccinated it’s because they’re not scared of the disease, and they have false concerns about what the vaccine can do. That’s what this is all about, so don’t make it so easy for them to exempt themselves.

Beyerstein: Who would you say are the biggest players in the anti-vaccine movement now, if you’re looking at the people who are responsible for the sad state of vaccine public opinion?

Offit: I think it was the National Vaccine Information Center. They were born in the early 1980s. At the time, they were called “Dissatisfied Parents Together,” or DPT. They were concerned that the wholesale pertussis vaccine, which was used then—pertussis being whooping cough—caused permanent brain damage, which was absolutely not true. It was shown in many studies not to be true. It’s been more than thirty years and that kind of launched the notion that vaccines may be doing more harm than good. It’s interesting, if you look at the measles outbreak in Southern California, a number of those people are over twenty. I think those are the first generation of children born of that sort of anti-vaccine sentiment of the early 1980s. . . . I definitely think that the anti-vaccine movement is losing ground. I think that the media have got far more responsible about covering this story. If you look at the way it was covered fifteen years ago, it was always this false mantra of balance, which is tell two sides of the story when only one side is supported by the science. . . . I think the media are much more responsible about this either because younger journalists are being trained in perspective and not false balance, or because the outbreaks are so egregious that you can’t help but feel the choice not to get a vaccine was a bad one.

Beyerstein: If you’re a parent and you’re concerned about vaccination levels at your kid’s school, what can you do to change that to help protect people?

Offit: I think that you can attend a PTA meeting say, “Look, I think we should all care about each other. We all are responsible for each other.” When a Jehovah’s Witness, for example, chooses not to get a blood transfusion when they have a life-threatening loss of blood, they’ve made a decision for themselves and themselves only. They can’t make that decision for the child. But you can make that decision for yourself, fine, that’s fine. It doesn’t affect anybody else. When you choose not to get a vaccine, that’s a different story. Now you are saying, “It’s my right to spread a potentially fatal infection.”

This piece is adapted from a transcript of the February 2, 2015, Point of Inquiry podcast. The full interview can be heard at http://www.pointofinquiry.org/paul_offit_md_on_measles_in_the_magic_kingdom_and_the_anti-vaccine_movement/.