Mysterious rectangular rubber-like blocks, with the enigmatic word TJIPETIR engraved into them, have been washing up for the past few years on the beaches of northern Europe. Over a century old, it has been suggested that the blocks could have come from the site of the 1912 sinking of the Titanic. But reality usually has a way of turning up stranger than fiction. 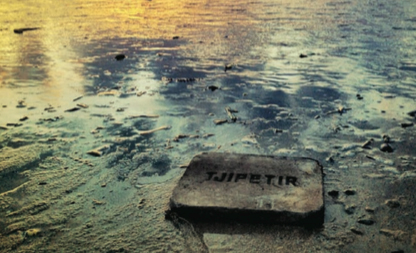 This is a mystery that for a long time has left anyone finding such blocks puzzled, whether they were located in France, Spain, or Germany. What are these strange rubber-like tablets? And what does the word TJIPETIR mean?

One morning in 2012, a British woman, Tracey Williams, took her dog for a walk around her property on a beach in Newquay, Cornwall, and found a black block just washed ashore by the sea. It reminded her of a chopping board, but it had that inexplicable word engraved at the center. She decided to take it home with her as a strange souvenir from the sea.

Things took a different turn when, a few weeks later, Williams found another block on another beach alongside bales of rubber. “Finding one was interesting,” said Williams, “but finding two was rather odd.” The coincidence piqued her curiosity, and the woman started to investigate the nature and origin of the mysterious blocks.

The first thing she realized was that the blocks were not technically rubber but instead gutta-percha, the gum of a tree found in Malaysia used in the nineteenth and early twentieth centuries to insulate telegraph cables on the seabed and to make golf balls, teddy bear noses, picture frames, and many other things.

Williams was not new to unusual discoveries on the beach. “We used to have beach combing expeditions,” she said, “and we’d always have treasure hunts,” Williams told Public Radio International (PRI). Several years ago, Williams began to find pieces of LEGO on the beaches of South Devon. Not having access to the Internet at the time, she failed to understand their origin. Then, in 2010, she moved to Cornwall and was amazed to discover similar LEGOs showing up on the shore there.

Thanks to an Internet search, she found that several years earlier a Japanese ship had come across very rough seas and had spilled some of its cargo made of LEGO bricks. So she set up a Facebook page titled “Lego Lost at Sea” and started to receive reports from other people who had found similar bricks, and was thus able to create a map of how the LEGO wrecks had distributed themselves along the coast.

With the two blocks of TJIPETIR, Williams decided to follow the same road. She created another Facebook page devoted to the new mystery and wondered if others had found similar boards. The answers started to arrive quickly. Others had found the TJIPETIR blocks on other coasts of Britain, but also in France, Holland, Germany, Norway, Sweden, and Denmark. Often the blocks included bales and rolls of rubber. “The TJIPETIR story really did intrigue me. I have been fascinated,” she said. “And it has taken over my life slightly in recent years,” Williams told PRI.

It was at this point that some began to speculate that the gutta-percha could have come from the Titanic. The French newspaper Le Figaro did an investigation and discovered that the ship’s manifest showed that the Titanic had indeed been carrying gutta-percha and bales of rubber. “I’m not saying that these blocks come from the Titanic,” François Galgani, a researcher for IFREMER, the French company that had contributed to the discovery of the wreck of the Titanic in 1986, said at the time, “but there is nothing allowing us to discard this possibility.”

The idea began to take shape. Since gutta-percha blocks disintegrate soon after being exposed to light, their antiquity suggested that they had remained hidden for a long time, for example inside the bowels of a ship. The Titanic, which has been lying on the ocean floor for 103 years now, is falling apart, and the dissolution of a wall might have caused the blocks to resurface. “It was like a big jigsaw with lots of pieces missing,” said Williams, who was also fascinated by the Titanic hypothesis. However, the turning point came in the summer of 2013, moving the lost transatlantic vessel out of the way for good.

The Real Wreck  of the Titanic

The sinking of the Titanic, which took place in the North Atlantic on April 15, 1912, was considered at the time the greatest maritime disaster in history. Of the 2,200 people on board only 700 were saved. In the weeks after the sinking, the ships that crossed the Titanic’s route found dozens of frozen bodies still floating, clinging to the wreckage of the ship or lifesavers. Some of those objects—panels, pillars, lifeboats, and other artifacts—were recovered and soon became collector items. Then in 1986 when the ship wreck was located on the ocean floor, operations began almost immediately, more or less authorized, for the recovery of objects. A French company, the IFREMER, brought to light more than 1,800 artifacts, including a porthole, a couple of taps, a crane, pans, dishes, and more. To date, 5,500 objects—including a section of the hull twenty-six meters long and weighing seventeen tons—have been recovered. However, many people, such as the wreck’s discoverer, Robert Ballard, believe that the ocean floor should have been preserved as a museum.

Williams was approached by two people who wanted to remain anonymous but offered an explanation for the blocks: They were released during a salvage operation on the wreck of a Japanese ship, the Miyazaki Maru, a passenger ship that was sunk during World War I.

In May 1917, the ship was 150 miles from the Isles of Scilly, southwest of England. German submarine U-88, captained by Walther Schwieger, who was one of Germany’s most successful U-boat aces, hit the Miyazaki Maru with a torpedo. Only two years earlier, the same Schwieger had sunk the RMS Lusitania, a liner bound for Liverpool, causing the death of 1,100 people, including more than 100 Americans, an episode that is thought to have hastened America’s entry into the war.

When Miyazaki Maru sank, it took with it eight victims and a cargo that included blocks of gutta-percha. A salvage operation in 2008 probably released the rubber blocks, which started to float on the waters of the Atlantic. Even Alison Kentuck, the British government’s Receiver of the Wreck—the official who administers wreck and salvage laws within U.K. territorial waters—also said it is most likely the blocks are indeed cargo from that ship.

“When we are made aware of wreckage we conduct research to find the owner,” she said.

We look at the age of the items, where they could have come from, and examine any markings. Our findings with these particular items pointed towards that particular wreck. So although we have not confirmed it, the Miyazaki Maru is our favored possibility as the source of the washed-up blocks.

However, according to oceanographer Curtis Ebbesmeyer, who specializes in tracking flotsam, the TJIPETIR blocks may have been washing up on beaches for centuries. Ebbesmeyer told the BBC:

Based on the findings so far, they are clearly being fed into the hemispheric ocean circulation. It only takes 25 years for flotsam to go around the world, and they’ve probably been around long enough to go around the world three times. They’re still in good condition after all these years, which is unusual. They’re probably one of the great pieces of flotsam that people may be finding 100 years from now.

Several people also reported finding TJIPETIR blocks back in 2008, before the current salvage operation is thought to have begun on the Miyazaki Maru. One person has come forward to say he found a block more than thirty years ago and used it as a chopping board to gut fish on his fishing boat.

But what does that mysterious inscription, TJIPETIR, mean? This turns out to be the name of a rubber plantation in West Java, Indonesia, which operated in the late nineteenth and early twentieth centuries. The gutta-percha was a rubber-like substance that was in fact found in the Malay Peninsula and in Malaysia, and it was used before the invention of plastic.

“The important thing is, for me, that the story’s only just beginning,” concluded Tracey Williams to PRI. “We might know the name of the ship, but there are the stories of everybody on board that ship, and what happened to it. And I want to find out.”

UFO Conspiracies at the UFO Congress

Diet-Heart: A Hypothesis in Crisis? Part 3: The Modern Macronutriet War Rages On

A Skeptic’s Guide to Ethical and Effective Curse Removal

No Reason to Believe That Sykes’s Yeti-Bear Cryptid Exists

A Brief History of Scientific Celebrity