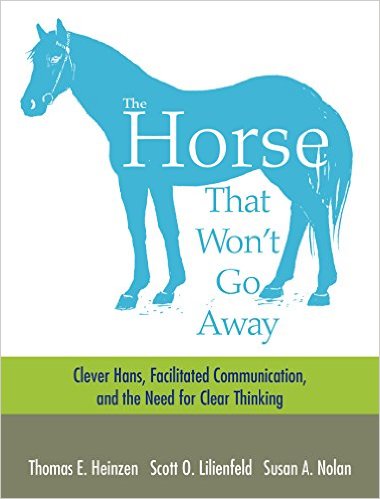 It’s a cliché to say that good things come in small packages but in the case of this book (a mere 5.5 by 7.2 inches), the cliché is true. The 136 pages contain only three chapters. But these chapters tell a story that is historically fascinating and of great importance. The first is a retelling of the case of Clever Hans, the German horse that convinced not only the general public but many, almost all in fact, professors of psychology and horsemen that he had the intelligence of a young boy. Hans, you see, could answer questions put to him. Now, we’re not dealing with a Mr. Ed here. Hans didn’t speak. He tapped out his answers. You asked him what the square root of twenty-five was, and he tapped five times. The authors go into detail about Hans’s “abilities” and the people he fooled. Readers with an interest in the history of psychology will especially enjoy the rare original photos of Hans and his owner, Herr von Osten, in action.

A clever graduate student, Oskar Pfungst, discovered the explanation for Hans’s seemingly intellectual abilities. Von Osten was, unconsciously, signaling Hans when to stop tapping his hoof. So, in the example above, when asked a question like the square root of twenty-five, Hans would start slowly tapping. When he got to the “correct” answer, von Osten, or any other inquisitor, would look up or make some other small and unnoticed movement that would cue Hans to stop tapping. Pfungst revealed this by doing experiments in which Hans was unable to observe his questioner. In this situation, his responses were meaningless.

At first, von Osten accepted the fact that Hans was merely picking up subtle cues that caused him to stop tapping. But that didn’t last for more than a day or two. Perhaps not surprisingly, von Osten promptly stopped any further experiments that might challenge his belief in the horse’s intelligence. This is, the authors point out, a case of “naive realism” in which seeing something results in a specific belief about its causes without any attempt to examine whether or not the presumed cause is actually causal. In other words, “seeing is believing.”

Of course, this tale has been told many times before. But here it is told for a unique purpose. Chapter 2 is titled “Clever Hands: The Facilitated Communication Story.” This chapter highlights the similarities between the naive realism that led von Osten to believe that Hans was intelligent and the naive realism that led (and, sadly, still leads) practitioners of facilitated communication (FC) to believe that their students are really communicating. When doubts started to be raised about the validity of FC, experiments were conducted in which a facilitated child and a facilitator were shown different objects and the child was to type out the name of the object he or she, not the facilitator, saw. In dozens of published experiments in every case, every single one, the child always typed out the name of the thing the facilitator saw that the child could not see. The reaction from the FC camp was to charge that these failures were due to having to facilitate under stressful and unusual conditions. However, many of these studies were run by the same people who had previously facilitated with the children. And, according to FC proponents, children had no problems facilitating in front of large audiences of strangers at FC conferences. The chapter also covers the horror that FC brought—the false claims of sexual abuse of children being facilitated. The claims arose in the head of the facilitator, not the children.

If you thought that FC was a thing of the past, you’d be very wrong. The latter part of chapter 2 documents its return like one of those horror movie monsters that just won’t stay dead. The use of the technique, although rebranded as “supported typing” or “rapid prompting,” is “still prevalent in disability service and educational settings” (J. Chen and K. Nankervis, “Stolen Voices: Facilitated Communication Is an Abuse of Human Rights,” Evidence Based Communication Assessment and Intervention, 2015, in press). Douglas Biklen, who introduced FC to the United States, was promoted to the position of Dean of the School of Education at Syracuse University by University President Cantor, a psychologist who has an autistic child. He was even honored with a UNESCO award for his work with the disabled. Scott Lilienfeld, one of the authors of the book under review, has written an important paper on the return of FC: “Persistence of Fad Interventions in the Face of Negative Scientific Evi­dence: Facilitated Communication for Autism as a Case Example” in the journal Evidence Based Communication Assessment and Intervention (2015, in press; see “Facilitated Communication Has Returned from the Dead,” May/June 2015 SI). Recognizing the importance of this paper, the journal’s publisher, Routledge, has made the paper freely available online at http://www.tandfonline.com/doi/full/10.1080/17489539.2014.976332#.VNosKLvlJjQ.

The fact that the educational disabilities community is deaf to the scientific reality that FC is not only invalid but robs disabled individuals of their basic human rights by making the words and thoughts of others appear to be theirs and preventing them from expressing themselves as best they can (Chen and Nakervis, cited above) is extremely disturbing.

Chapter 3, “The Clever Hans Effect in Everyday Life,” shows how naive realism has spawned belief in several phenomena where such belief can have negative consequences. Most surprising to me was the finding that drug- and explosive-sniffing dogs do very poorly in actual tests where their handlers don’t know where the target materials are or are thought to be. Although the authors agree that more research is needed, the fact that such dogs will “alert” when there’s nothing there is troubling. One study the authors describe showed that out of 10,000 alerts, there was a 74 percent false alarm rate. Naive realism is also responsible for the incorrect beliefs that intervention programs such as Scared Straight and DARE (Drug Abuse Resistance Education) work when the data show clearly that they don’t. The consequences of such false beliefs are not trivial. The last two mentioned programs have huge annual costs and may even have effects opposite of those claimed, thus doing more harm than simply doing nothing.

The vastly exaggerated worry about “stranger danger”—the fear that our children are in serious danger almost all the time from strangers waiting to abduct them—is another example of the pernicious effects of naive realism discussed in chapter 3. In reality, stranger abductions are extremely, extremely rare. For example, in 1999 115 children were taken by strangers. But since there were 72 million kids in the United States that year, the chance of such an event happening is 0.00000159 percent. In contrast, in the same year 4,564 children died in automobile accidents. So the risk of such a death is almost forty times greater. But that risk attracts far less panic than stranger danger.

There has been much discussion over the last few years in the skeptical community about what direction skeptical activity should take in the future. Should it continue to debunk the old standards like UFOs, ESP, Bigfoot, and astrology, or move on to other topics? In my view, continued attention to the “old” topics will always be needed. But the book under review here shows how skepticism can have truly beneficial effects that go beyond the more fringe “old” topics. Speaking out loudly and strongly against quack treatments like facilitated communication that do real harm to thousands of people would seem to me to be an important goal for skepticism in the future. The Horse that Won’t Go Away is an excellent step in this direction.

It’s common to say that a book should be “required reading.” In my case, this won’t be just a cliché since I will be assigning this book in every psychology course I teach from now on. It is very well written. It is never boring or pedantic. It contains much excellent material for class discussion and written projects.

UFO Conspiracies at the UFO Congress

Diet-Heart: A Hypothesis in Crisis? Part 3: The Modern Macronutriet War Rages On

A Skeptic’s Guide to Ethical and Effective Curse Removal

No Reason to Believe That Sykes’s Yeti-Bear Cryptid Exists

A Brief History of Scientific Celebrity