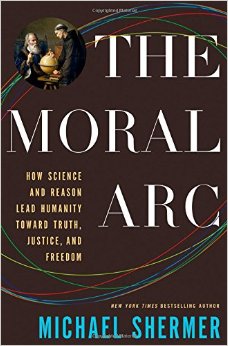 Religion has often positioned itself as the originator (and for some the sole provider) of morality. In The Moral Arc, Michael Shermer argues that “most of the moral development of the past several centuries has been the result of secular not religious forces” and that it is science and reason that bend the moral arc toward justice, truth, and freedom. For the few who don’t know Michael Shermer, he is the founding publisher of Skeptic magazine and the writer of a number of successful books, including Why People Believe Weird Things. For those wondering what the moral arc is, the book’s first section, “The Moral Arc Explained,” covers it. In brief, the moral arc is a metaphor Shermer borrowed from a nineteenth-century abolitionist preacher named Theodore Parker that “symbolizes what may be the most important and least appreciated trend in human history—moral progress.”

What has been driving moral progress is explained by another metaphor: the expanding moral sphere. Shermer prefers the three-dimensional sphere over the original expanding circle first used in 1869. (We may think of ourselves as morally progressive, but Irish historian William Edward Hartpole Lecky, who first used the expanding circle metaphor, wrote about including animals in our moral circle almost 150 years ago.) Why is our moral sphere expanding? Shermer ascribes that to “our expanding intelligence and abstract reasoning ability,” which gives us the ability to change our point of view and to see and feel the perspectives of others: other races, other sexes, other sexual orientations, and other species.

The exchange of perspectives gives rise to the application of the moral arc, the results of which is the subject of the book’s second section. Here Shermer gives a thorough account of the abolition of slavery, the rise of women’s rights, the progress of the gay rights movement, and the current state of animal rights. A lot of research went into this section (each chapter’s endnotes contain more than fifty references) and the quality of the narrative matches the quantity of the data, giving ample opportunity to exchange perspectives and maybe expand one’s own moral sphere. It may sound odd to describe chapters that discuss so much tragedy, pain, and suffering as enjoyable, but they are. This may be because they are stories of triumph, at least for three of the four subjects. The chapter on animal rights may have you rethinking that steak dinner and questioning the justifiability of animal testing.

“In a book on moral progress, it is necessary to address its obvious antithesis—moral regress—and identify which pathways lead to evil, to mitigate them.” This is the topic of the third and final section, where Shermer considers the psychology of immorality using the “arguably no more poignant example than that of the Nazis.” Shermer seeks to understand how an otherwise “intelligent, learned, highly cultured people” could commit such atrocities. This investigation leads to questions of moral culpability. In a deterministic world, can you hold people accountable for their actions? Throughout the book Shermer argues for the importance of continuous thinking over categorical thinking, spectrums not pairs. In this instance he suggests that we think about “degrees of freedom,” a scale with insects on one end having very little freedom and humans on the other possessing the most. Even within our species there is a range where some people—“psychopaths, the brain-damaged, the severely depressed, or the chemically addicted—have fewer degrees of freedom.” With this understanding the question turns to what do to with this knowledge and how to apply it in our justice systems. Is the goal of our justice system to mete out punishment or lower recidivism? What works best? A retributive, punishment-based justice system or a restorative one? Shermer demonstrates with studies and explains through anecdotes how restorative justice, where the perpetrator “apologizes for the crime; attempts to set to rights the situation; and, ideally, initiates or restores good relations with the victim,” can work.

Shermer describes The Moral Arc as a “protopian work,” a phrase meant to distinguish it from the unrealistic ideal of utopia, a static place where everything is perfect. Protopia is about making steady and continuous incremental improvement, to “try to make the world a slightly better place tomorrow than yesterday.” Shermer is optimistic; after reading The Moral Arc you may be too.