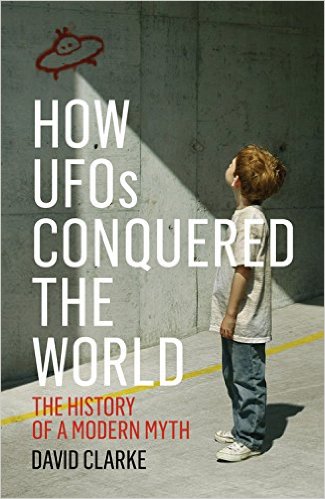 One of the most profound observations ever made about UFOs was that of the late British Fortean author Hilary Evans in his essay “A Twentieth Century Myth”: “No anomalous phenomenon has generated so rich an anomaly-cluster as the flying saucer. Kenneth Arnold’s straightforward, uncomplicated sighting” was gradually embedded in “a sprawling aggregate of associated happenings”—cattle mutilations, crop circles, black helicopters, Men in Black, saucer crashes and saucer bases, contactees, abductees, etc.—“constituting a wonderfully rich and elaborate mythology unmatched in the world’s folklore.”

This is, I’m sure, what Clarke means when he says that UFOs “Conquered the World,” and in this book he sets out to understand why. Clarke explains this using another quote from Evans: “Hilary Evans said that most of us have never known a time when there was no such thing as a UFO. ‘Yet there was such a time,’ he wrote. ‘UFOs are a creation of our time, and when their time came, they were born.’”

Clarke teaches journalism and media law at Sheffield Hallam University in the United Kingdom and writes a monthly column for Fortean Times magazine. (British Forteans, for whatever reason, tend to be much more skeptical than their American counterparts.) And unlike some writers who dabble in folklore and UFOs, Clarke understands that when stories parallel folklore, it suggests they are fiction not truth. “Folklorists categorize invented or false stories as examples of what they call ‘ostension,’ whereby people either spontaneously or deliberately create new stories and events that reproduce existing lore and legends.” He presents a detailed argument showing how pre-1947 science-fiction stories already contained most of the significant themes later turning up as “actual” UFO claims:

Ockham’s razor suggests that aliens are not monsters from the Id, or expressions of a collective unconscious, let alone travellers from another world. They are products of our imagination and the science fiction that has been clogging our brains for more than a century.

The book begins largely autobiographically, describing Clarke’s own infatuation with UFOs as a youth growing up in the 1970s. As a teenager he began investigating local UFO sightings and saw problems in the narratives that others overlooked. “During the encounters that followed my doubts grew and my naïve faith was challenged to the breaking point.” He was surprised to find that UFOlogists, including some well-known ones, instead of welcoming prosaic explanations for sightings, resisted them. One supposed UFO witness told Clarke, when presented with a logical explanation, “Look, you can’t take this sighting away from me!”

Clarke launches into an overview history of UFOs, not surprisingly concentrating on the British perspective. Much of this information is not available elsewhere for readers in the United States. He shows how observers at the famous UFO “hotspot” at Warminster were easily fooled by simple hoax balloons launched from a nearby hill and how when this was revealed in a BBC television program the UFO spotters refused to accept the explanation.

When the British Ministry of Defence (MOD) began releasing some UFO-related documents in 1998, Clarke was among the first to pore over them. He was surprised to find how little substance they contained. When the United Kingdom passed a freedom of information act in 2005, Clarke began requesting UFO-related documents from the Ministry of Defence. In 2007, the MOD began a mass-release of records from its UFO desk.

The time I had invested researching the older files and my contacts with the UFO desk staff made me the obvious curator for the collection. It was quite a turnaround. After a decade acting as a poacher I suddenly found myself playing the role of a gamekeeper. From 2008 I began working with the staff at Kew to prepare ten separate tranches of documents for release. A total of 227 files and more than 52,000 pages were eventually scanned and uploaded to the National Archives web site where they can be downloaded by anyone.

This has, perhaps inevitably, brought Clarke into a long-standing feud with Nick Pope, who has made a twenty-year career as a big-name UFOlogist out of having worked on the MOD UFO desk for three years during the early 1990s. But believers in UFO conspiracies refused to accept that there are no secret, bombshell UFO files hidden away. “The UFO Truthers, as I now call them, refuse to believe anything unless it has first been denied.”

Clarke gives us an interesting history of British UFO contactees, especially George King, who claimed to be in contact with a space god called Master Aetherius. Noting that seventeen years after his death King had been deified as a “cosmic avatar” by the leader of the church he founded, Clarke remarked, “I could not see why those who claim that flying saucers bring messages from the gods should be regarded as any less genuinely held, or unbelievable, than the tenets of any other religion.” He then presents a discussion of UFOs in the context of religion, finding many similarities.

I spotted a few minor errors, most probably owing to the still-significant gulf between American and British UFOlogy (for example, he places the media frenzy over fabulist Bob Lazar’s Area 51 claims in Los Angeles instead of Las Vegas)—and I will overlook his comment that CSICOP/CSI is a “notorious sceptical organization.”

Clarke, like most British Forteans, opts for the “psychosocial hypothesis” (PSH) to explain UFOs and most other Fortean phenomena. He illustrates it with a quote from the British journalist Bryan Appleyard saying that the PSH explains UFOs as “products of our minds: projections of our anxieties or aspirations, culturally determined fantasies or hallucinations or new religions in the process of emerging from the ashes of the old.” Clarke contrasts this with “debunking of the type associated with Richard Dawkins,” because the PSH sees the social phenomenon of UFOs “as interesting and worthy of serious study.” I don’t recall any UFO skeptic suggesting that they are not.

Given that the PSH sees UFOs as “fantasies or hallucinations” that are “products of our minds,” the difference between the two approaches (PSH and “debunking”) would seem to be largely semantic. The PSH seems to amount to a polite and respectful way of saying “it’s all in your mind,” suggesting that there are good reasons for that being the case.

However, none of this detracts significantly from the importance of the book; it is the best book on UFOs to appear in a long time, and I encourage everyone interested in the subject to read it.