“Charlie, can we play?” This simple question—and two pencils put on a cross drawn on a piece of paper—should allow you to evoke the spirit of a child or even a demon.

This is the latest web craze known as the “Charlie Charlie Challenge,” perhaps dating back to an ancient Mexican tradition, an experience that intrigues kids and scares adults. Through a sort of séance, some claim people can ask questions to some unseen entity that should be able to reply.

It works like this: On a sheet of paper you draw a cross and in the four quadrants thus formed you write the words Yes and No. You then put a pencil on the sheet, corresponding to one arm of the cross, and a second pencil you put perpendicularly onto the first. Then you ask if the spirit is present, and when the top pencil moves on Yes, you can start asking questions. If it moves to No, just try again later. 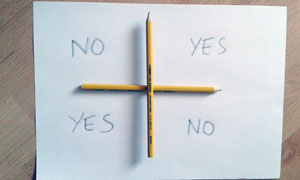 On social media, you can find videos of people fleeing in terror as soon as the pencil starts moving, or kids who burst out laughing when the question “Will I be rejected?” has the pencil moving to No.

There are those who take this game quite seriously. In Jamaica, the Ministry of Education has issued a ban against students playing the game, as has the Fiji Ministry of Education. In Italy, the head teacher of a middle school in Ceres, in the province of Verona, has forbidden the game in class to avoid upsetting sensitive students. There are even those who worry that the game could unleash real supernatural phenomena.

The Catholic writer Annalisa Colzi is convinced: “Well, the play Charlie has this purpose: to enslave the souls through the evocation of demons,” she explains on her blog. “What happens to those who play this game? Many unpleasant surprises that get worse over time.” And the president of the GRIS (Group of Socio-Religious Research and Information), Father François Dermine, an exorcist, agrees: “I know a lady who after dabbling in spiritualism began to hear voices who told her to kill and many other negative things that made her head explode. She started a series of exorcism sessions, but it was not easy to free her; it took years of pain and insomnia.” These rumors and fears of negative consequences have no confirmation in reality beyond individual psychological problems.

The idea of ​​a power allowing people to summon spirits extemporaneously—and without the intervention of a medium who needs to fall into a trance—is anything but new. During the late 1800s, the Ouija board was all the rage. It was a rectangular wood plate on which the letters of the alphabet were drawn, plus the words Yes and No. Its name derived from the word “Yes” in French and German.

An indicator or planchette was placed on the board, and on it the participants placed a finger. After a while, the indicator started to move, moving to several letters that formed, in sequence, words in response to questions put to the spirit. A more recent version of the Ouija sees the use of a board of paper on which the alphabet letters are handwritten and, instead of the indicator, an upturned glass or a coin are used. Participants rest a finger on the back of the glass and it starts moving, indicating different letters. The Ouija board was later patented as a board game by Parker Brothers and can be easily be found in toy stores.

The explanation for such phenomena has been well known since the nineteenth century when physicist Michael Faraday, studying the phenomenon of moving tables during séances, discovered that it was not the spirits that moved them but the people who were sitting around it resting their fingers on the table surface. They did not do so voluntarily, of course, but by involuntary muscular movements.

In such cases, participants form words in response to the questions asked, pushing the indicator without noticing. However, should they lift their fingers from the indicator, the “spirits” suddenly stop communicating. In other words, when the mind is absorbed in concentration, the muscles obey the will of the operator without him or her noticing. This reaction is now known as the ideomotor effect.

This mechanism, however, does not explain the Charlie Charlie Challenge, since nobody here touches the pencils. What happens, and how did this phenomenon start? First, it should be noted that it does not have ancient Mexican origins but is something much more recent. Some have speculated it may be a viral marketing gimmick designed to promote a horror movie just coming out at the time, The Gallows, but even if the film’s producers had tried to take advantage of such free advertising, the game did not originate with them.

The origin seems rather a balancing act with pencils called “Jugando Charly Charlie” posted on YouTube in 2014, or a variation of a few years back. However, it seems that it was a sensational television report aired last April on television in the Dominican Republic that triggered a worldwide interest in the game.

For Caitlyn Dewey of the Washington Post, the game is the perfect example of a viral fad crossing cultures: “Charlie makes a killer case study in virality and how things move in and out of languages and cultures online. You’ll notice, for instance, a lot of players and reporters talking about the game as if it were new, when it’s actually—and more interestingly, I think—an old game that has just recently crossed the language divide.”

But can two pencils really unleash supernatural forces? Of course not. The movement is due to the unstable equilibrium in the two pencils. Indeed, it is almost impossible to keep the top pencil still once it is set above the other one. Any air current, caused by a movement, a breeze, or even only by breath, is enough to trigger the rotation. Just try it.

But a question remains: Are these seemingly supernatural games bad for our kids? “There’s a real social bonding aspect to this whole phenomenon,” says Stuart Vyse, a psychologist at Connecticut College, was quoted as saying on the website Vox. “It’s almost a developmental passage for some kids, to deal with things that are scary.”

However, there are no scientific studies yet about what effects playing games like the Charlie Charlie Challenge may have on the psyche or behavior of kids. Says Mark Griffiths, a psychologist at Nottingham Trent University in England, in an article for The Independent:

As both a psychologist and a father of three adolescents, I have yet to see any evidence that the playing of such games does any psychological harm although it’s not an activity that I would actively encourage either. As a teenager and as a university student I playfully engaged in séances and at one party used a Ouija board and it never did me any harm. Some may even argue that such activities are “character building.” However, there may be children and adolescents of a more sensitive disposition where such games might have a more long-lasting negative detrimental effect.