On May 16, 2013, President Obama tweeted that “Ninety-seven percent of scientists agree: #climate change is real, man-made and dangerous.” The President is one of countless people who have come to believe that there is a “97% consensus” on anthropogenic global warming (AGW).

Since it is inconceivable that any climate scientist today could have no opinion on the subject, if 97 percent accept AGW it follows that 3 percent reject it. To those outside of science, 3 percent may seem an insignificant percentage. However, we scientists know that a small minority has often turned out to be right, otherwise there would have been no scientific revolutions. In the 1950s, for example, the percentage of American geologists who accepted continental drift was likely less than 3 percent. Yet they were right.

If there were a 3 percent minority on AGW it would matter, but there is not. The “97% consensus” is false. The percentage of publishing climate scientists who accept AGW is at least 99.9 percent and may verge on unanimity. 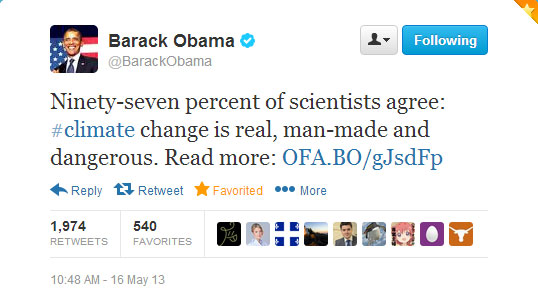 How, then, has nearly everyone from President Obama on down come to buy the claim of a 97 percent consensus? The figure comes from a 2013 article in Environmental Research Letters by Cook et al. titled “Quantifying the Consensus on Anthropogenic Global Warming in the Scientific Literature.” They reported that “Among abstracts expressing a position on AGW, 97.1% endorsed the consensus position that humans are causing global warming” (emphasis added). The 97 percent figure went viral and, not surprisingly, the qualifying phrase “expressing a position”—the fine print, if you will—got dropped. But those three words expose the false assumption inherent in the Cook et al. methodology.

Cook et al. used the Web of Science science-citation research site to review the titles and abstracts of peer-reviewed articles from 1991–2011 with the keywords “global climate change” and “global warming.” They classified the articles into seven categories from “(1) Explicit endorsement with quantification” to “(7) Explicit rejection with quantification.” In the middle was “(4) No position.”

The sine qua non of the Cook et al. method is the assumption that publishing scientists who accept a theory will say so—they will “endorse” it in the title or abstract. To count an article as part of the consensus, Cook et al. required that it “address or mention the cause of global warming.” Of the 11,944 articles that came up in their search, 7,970—two thirds—did not. Cook et al. classified those articles as taking no position and thus ruled them out of the consensus. 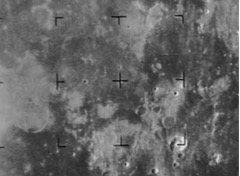 Do we need to know any more to realize that there is something wrong with the Cook et al. method? The consensus is what the majority accept; you cannot rule out a two-thirds majority and still derive the consensus.

Moreover, is it true that scientists routinely endorse the ruling paradigm of their discipline? To find out, I used the Web of Science to review articles in three fields: plate tectonics, the origin of lunar craters, and evolution. 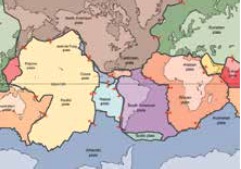 Of 500 recent articles on “plate tectonics,” none in my opinion endorsed the theory directly or explicitly. Nor did a single article reject plate tectonics. This statement was about as close to an endorsement as any came: “Plate tectonics, which shapes the surface of the Earth, is the result of solid-state convection in Earth’s mantle over billions of years.”

What of lunar craters? As recently as 1964, nearly every scientist who had studied the moon believed that its craters were volcanic. Then in July of that year, the first successful Ranger mission returned thousands of photographs showing that the moon exhibits craters ranging in size from the colossal to the microscopic. Except for a few senior holdouts, scientists quickly embraced the meteorite impact theory. A Web of Science search for “lunar craters” today turns up 185 articles stretching back to 1920 (including an overlooked 1921 article by Alfred Wegener that showed convincingly that the craters are due to meteorite impact). I reviewed the abstracts of the most recent 100 articles, which go back to 1997. As with plate tectonics, none explicitly endorsed meteorite impact, nor did any reject it. The closest any came to an endorsement may be this sentence: “It is known that most of the craters on the surface of the Moon were created by the collision of minor bodies of the Solar System.”

Do biologists writing about evolution routinely endorse Darwin’s theory? I reviewed the abstracts of articles in the Journal of Evolutionary Biology from 2000 through 2014. Of 303 articles, 261 had abstracts. Not surprisingly, none of the 261 rejected the modern evolutionary synthesis; neither did any endorse it. The closest any came may have been this statement: “A long line of biologists have followed [Darwin] in seeing, in the concept of ‘descent with modification,’ a framework naturally able to incorporate both adaptation and constraint.”

Are the sentences quoted in the three preceding paragraphs endorsements or simple statements of fact?

To calculate their 97.1 percent result, the Cook et al. study divided the number of abstracts that they said endorsed AGW (3,896, including 2,909 “implicit” endorsements) by the total that expressed a position (4,014, which included the rejecting articles.) Would the method work for plate tectonics, the origin of lunar craters, and evolution? Since none of the authors of the articles I reviewed in those fields reject the theory in question and only a handful, if that, could be said to directly endorse it, the Cook et al. method would wind up classifying the vast majority as taking no position and omit them from the calculation. We would be left dividing a tiny number of perceived implicit endorsements, a highly subjective measure, by the same tiny number and wind up with 100 percent, after having ruled out nearly all the scientific literature. We might be left dividing zero by zero.

Remember that to count an article as endorsing, the Cook et al. study required that it “address or mention the cause of global warming.” Climate scientists refer to this as attribution. Some climate articles are about attribution but many are not. Consider these two examples.

In 1993, James Hansen and his colleagues published an article in Research & Exploration titled “How Sensitive Is the World’s Climate?” The purpose of the research was to “estimate climate sensitivity from observed climate change.” In other words, not only did Hansen et al. accept AGW, they were gauging how strong it is, reporting a temperature rise of 3 ± 1°C for doubled CO2. The abstract included this sentence: “Observed global warming of approximately 0.5°C in the past 140 years is consistent with anthropogenic greenhouse gases being the dominant climate-forcing in that period.” The sentence is evidently why Cook et al. classified this article in category 1: “explicit endorsement with quantification.”

Hansen et al.’s 1992 article “Potential Climate Impact of Mount Pinatubo Eruption” considered the effect of aerosols on global climate, successfully predicting that the injection of sulfur aerosols during the 1991 Mount Pinatubo eruption would temporarily lower global temperature. However, in this article Hansen and colleagues were researching the role of a natural event—volcanic eruptions—rather than the human contribution to global warming. Because of that their abstract did not “endorse the consensus position that humans are causing global warming,” as Cook et al. required. The Cook et al. study classified Hansen et al.’s 1992 article as taking no position and ruled it out of the consensus calculation.

James Hansen also had articles in the three endorsing categories and thus is represented in four. But Hansen does not have four different opinions about AGW—he has only one opinion, and we know very well what it is. His articles may use different language according to what he and his colleagues happen to be writing about, i.e., they may seem to “endorse” AGW or not, but these are distinctions without a difference. The Cook et al. classification is not about Hansen’s core belief but about the subject of his articles.

If scientists do not endorse the ruling paradigm, can we still quantify the extent of a scientific consensus? Yes, we can.

The articles that turned up in the Cook et al. search were not drawn at random but appeared because they answered the search topics “global warming” or “global climate change.” The authors in the Cook et al. database were writing about AGW. Would they have written about a theory that they believe is false yet never say so?

We can get a further clue using the research category classification that Cook et al. provided. Of the 7,970 “no position” articles, 56.8 percent were on the impacts of global warming, 18.4 percent on mitigation, 17.1 percent on measurements and modeling methods, and 7.7 percent on paleoclimatology. Would authors write about those aspects of global warming if they believed that AGW is false yet never say so? What would be the point?

We know from the history of science that the most important advances come when stubborn facts overthrow the ruling paradigm. This is how scientific reputations are made. It is why we remember Alfred Wegener and not his opponents. A scientist who has evidence that AGW is false will be eager to say so and to present that evidence. Who among us would not love to be that scientist!

Putting all this together, I argue that we can judge the extent of the consensus by the number of articles that explicitly reject AGW. Cook et al. found seventy-eight, 0.7 percent, that did so. From that one can infer that the authors of 99.3 percent of the articles in the Cook et al. database accept AGW. This would be the average over the twenty years of their survey. More recently, the percentage of acceptance has grown even higher.

This result would allow the claim that 99.99 percent of scientists publishing today accept AGW. To be conservative, I prefer to say above 99.9 percent.

Excluding self-citations, only one of the five rejecting articles has been cited and that article only once.

Remember that the 99.9 percent figure does not represent what we usually mean by consensus: agreement of opinion. Rather it is derived from the peer-reviewed literature and thus reflects the evidence therein. It tells us that there is virtually no publishable evidence against AGW. That is why scientists accept the theory.

The consensus on anthropogenic global warming is not 97 percent. Instead, publishing scientists are close to unanimous that “global warming is real, man-made, and dangerous,” as President Obama put it.

I have a paper under review in Environmental Research Letters in which I critique the Cook et al. paper. See jamespowell.org and please leave comments in the forum.

James Lawrence Powell is author of Four Revolutions in the Earth Sciences (reviewed in our May/June 2015 issue) and The Inquisition of Climate Science. He is executive director of the National Physical Science Consortium. He has been president of three colleges and of the Franklin Institute and the Los Angeles County Museum of Natural History. He is also a former member of the National Science Board and a newly elected fellow of the Committee for Skeptical Inquiry.