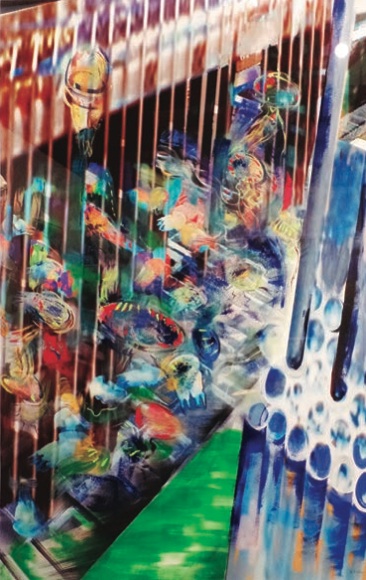 Art and science have a complex relationship. On the positive side, artists can be inspired by what philosopher Wilfrid Sellars calls the scientific “image” of the world, while scientists investigate the artistic experience from the points of view of evolutionary biology and neurobiology. On the negative side, artists may fail to actually grasp the science behind the flashy images or the catchy phrases, while scientists may talk as if art and aesthetics actually reduce solely to elements of Darwinian fitness and patterns of excitation of neurons.

It was therefore with a bit of trepidation that I went to the opening of a new exhibit at the Sidney Mishkin Gallery at Baruch College (part of the City University of New York), titled “Some Provocations from Skeptical Inquirers: Painted Prints, Photographs, and Videos by Ellen K. Levy and Patricia Olynyk.” Before going, I did my homework and read the catalog, penned by Charissa N. Terranova, associate professor of aesthetic studies at the University of Texas at Dallas, that accompanies the exhibit. I wanted to know what I was about to see and asked to comment on.

Terranova begins her introduction to the Levy-Olynyk exhibit in an interesting fashion by comparing art, skepticism, and faith, and suggesting that “Skepticism and art, simply put, are an active means to knowledge, while belief is a declaration of what one claims to know. Art is like skepticism in that one uses art to understand the world by relations.” I never quite thought of it that way; of course one could argue that if skepticism and art are both in the business of knowledge, then “knowledge” may mean different things in those two contexts. But I can definitely get behind the idea that both skepticism and art are ways for human beings to explore and understand, which still makes for a sharp contrast with faith, conceived as a declaration of what someone thinks he knows.

In terms of the actual art exhibited at Baruch, Terranova maintains that “Levy and Olynyk use scientific ideas, archives, and scientifically proven outcomes as the material to make art that helps make sense of the world past and present.” This could be seen most obviously in Olynyk’s “Isomorphic Extension I + II” and in the nineteen panels of her “The Mutable Archive.” The first one deals with the transformation of human anatomy into prosthetic form by presenting floating images of artificial legs of different genders. Terranova’s notes explain: “Viewers experience an interrupted, dismembered sense of the uncanny valley, the space of revulsion and fear one enters when confronted by a lifelike robotic or cyborg version of the human.” The second piece is a collaborative project in which the artist went through some memorial cards accompanying the skull collection put together by Josef Hyrtl, a nineteenth-century Viennese anatomist. Olynyk commissioned a number of artists, scientists, and philosophers (and, ahem, a “spiritual medium”) to fill out the (very large) blanks about the lives of the people filed in Hyrtl’s cards. Here is Terranova again: “These series of notations within Olynyk’s cluster of nineteen subjects reminds us of the slippages in recording histories. That those subjects who occupied a higher position in society were afforded more elaborate documentation that did not simply reduce them to a ‘scaphocephalus’ or ‘Japan Yedo’ reminds us that the taxonomic system that binds them together is anything but value neutral.” 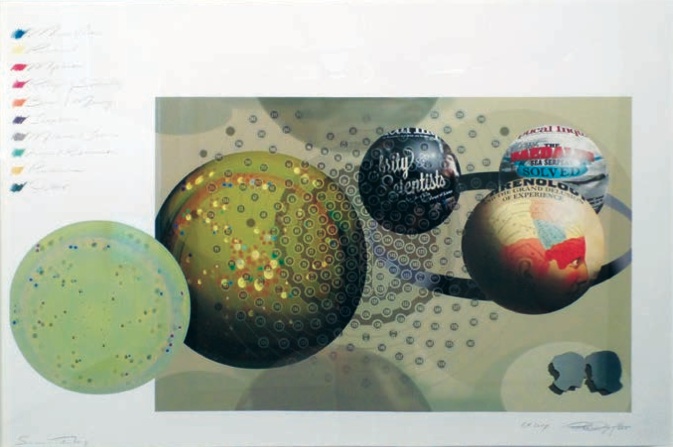 Levy and Olynyk have collaborated on some of the pieces, particularly the one that has a very direct connection to Skeptical Inquirer. In their “Scenario Thinking,” the two artists deployed a data visualization technique to display the patterns of articles published in SI over a period of twenty years. The piece presents the viewer with a series of large spheres, each including small circumferences that represent one year’s worth of publication. Inside each yearly circumference there are six smaller spheres, one per individual issue, in turn referring to two to six articles. The articles are then coded by topic (rationalism, green; the paranormal, yellow; mind/brain and memory, orange; and so forth). The whole thing ends up looking like an annotated version of the solar system. Here is the curator’s comment: “The planetary orbs of Scenario Thinking are at once macrocosmic and micro-cosmic, of the universe and cosmological while also instrumental in measuring the activity of the individual on the ground plane. As though a living being, the universe respires and pulsates in the form of flickering information.”

Whether you find that sort of commentary enlightening or not (and quite aside from the unfortunate choice of the spiritual medium mentioned above), the art itself is interesting, although some pieces in the exhibit are admittedly somewhat more loosely inspired by skepticism or science than others. The question of the relationship between art and science remains fascinating and open, and walking through the works of Ellen Levy and Patricia Olynyk while talking to both art lovers and skeptics who had come to see them was an enjoyable excuse to ponder it further.

Massimo Pigliucci is professor of philosophy at the City University of New York–Lehman College, a fellow of the American Association for the Advancement of Science, and author of Nonsense on Stilts: How to Tell Science from Bunk. His essays can be found at rationallyspeaking.org.