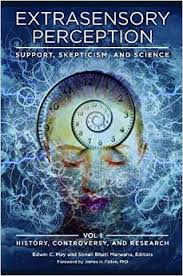 Extrasensory Perception is divided into two volumes, the first titled History, Controversy, and Research and the second Theories of Psi. It is introduced by Professor James Fallon, who describes himself as a “basic sciences hard-boiled neuroscientist” who generally considers psi (psychic power) to be little more than wishful thinking. However, he is so impressed by what he refers to as the sophistication demonstrated in this work—in terms of experimental design, statistical analysis, protection against fraud, and so forth—that he plans to make it required reading for his first-year graduate students. Such a positive endorsement by a self-described skeptic—combined with the work’s subtitle, Support, Skepticism, and Science—raises expectations of a rigorous and dispassionate examination of the evidence for extrasensory perception (ESP) and of the major methodological criticisms that it has engendered.

And therein lies the disappointment. While ESP proponents will no doubt be delighted by the parade of apparent data and theory in support of psi, skeptical criticism of parapsychological research is given short shrift indeed. Given that the first volume is titled History, Controversy, and Research, one might expect to find a detailed discussion and possible rebuttal of the many careful methodological criticisms leveled at ESP research by Ray Hyman, Susan Blackmore, David Marks, Richard Wiseman, and others, including me. However, of the fourteen chapters in this first volume, only three present a critical perspective, while the second volume virtually ignores criticism altogether. While those three chapters are well-presented and make valuable contributions in their own right, none focuses on the many specific methodological shortcomings that plague such research. In the first of them, philosopher Richard Corry concludes that while there is nothing impossible about ESP, “evidence for ESP must meet a high standard, a standard that it does not seem to have reached.” He goes on to offer a thoughtful analysis of the difficulties involved in interpreting parapsychological data, but he does not address in any detail why he believes that such a standard has not been met. Next, a chapter by psychologist Christopher French provides worthy insights into how people with similar backgrounds in science can differ so much in terms of their acceptance or rejection of supposed evidence for psi. He also discusses how cognitive biases and neuroscience can best explain many ostensibly paranormal experiences.

In the last of the three skeptical chapters, Eric-Jan Wagenmakers and colleagues argue that there has been an unintended benefit from parapsychological research and the criticism it has engendered: “The substantial credit for the current ‘crisis of confidence’ goes to psi researchers. It is their work that has helped convince other researchers that the academic system is broken, for if our standard scientific methods allow one to prove the impossible, then those methods are surely up for revision.” In my mind, this gives too much (albeit negative) credit to psi research; in fact, the concern has come largely from within science itself. Wagenmakers and colleagues go on to provide valuable criticisms of the statistical evaluation of psi data and suggest some ways to improve psi research. However, as in the preceding two chapters, particular methodological problems in psi research are not the focus.

If one were to judge by the remaining chapters, one would hardly think that there has been any responsible criticism of parapsychological research at all. This is made loud and clear in J.W. McMoneagle’s chapter on remote viewing, which opens with a quick dismissal of “much critique and hostile skepticism about the validity of precognition.” He then goes on to describe an apparently remarkable remote-viewing success that provided critical military intelligence. Lance Storm and Adam Rotman provide an overview of parapsychological research in Australia and Asia, without any acknowledgement of methodological criticisms of parapsychological research. Loyd Auerbach, Dominic Parker, and Sheila Smith survey parapsychological research in the United States. In this case, rather than addressing the serious methodological criticisms made by a number of critics, including me, of Daryl Bem’s research methodology as described in his publication in the Journal of Personality and Social Psychology, these authors argue that such criticism displays bias “not only against the very idea of publishing such research in mainstream journals but against the concepts being researched.” Bem’s research was methodologically unsound, and it is unfortunate that rather than addressing the criticisms of it, the authors simply reject them out of hand.

Dean Radin describes studies of presentiment (a supposedly unconscious form of precognition in which physiological activity—“pre-feeling”—occurs with regard to an unpredictable future event) and refers to numerous replications of presentiment studies. He concludes that “it is the repeatability that gives us confidence that the effect is genuine” (emphasis in the original). However, he wisely cautions that methodological loopholes in such research might yet be found and that “the potential for other biases to be lurking is ever present.” Of course, to the critic, it is not repeatability per se that is the important criterion but repeatability by neutral scientists. This is because design flaws and errors in interpretation are also likely to be repeated when replications are carried out by the same experimenters or by researchers who share their conviction that psi is real.

Yet parapsychologists argue that a neutral scientist, lacking in the belief that psi exists, may never be able to demonstrate psi, and so replicability in that sense may be unattainable. This is because of the so-called psi experimenter effect, which explains away failures to replicate through reinterpreting such failures as indirect evidence for psi. Tressoldi and Duggan, in their chapter focused primarily on psi research in Europe, argue that there is “clear and strong evidence for the role of experimenter belief in manifesting psi. . . . It asks the question whether the experimenter or the subject is using his or her precognitive ability to derive the response. Either way, it still indicates the existence of precognition!” A similar attempt to turn a sow’s ear into a silk purse is presented in the chapter written by statistician Jessica Utts:

The whole situation is complicated by the possibility of experimenter effects enhanced by psi abilities. It may be impossible to conduct a true replication unless two experimenters have identical beliefs and desires about the outcome. This realization may be the greatest legacy that psi research can contribute to the scientific enterprise. If true, it will require a major rethinking of the scientific method and the value of replication in science.

So, damn the torpedoes and full speed ahead. According to these writers, a failure to replicate a psi experiment not only does not weaken the evidence but may actually provide further evidence for psi, as a manifestation of the experimenter effect! This is certainly a win-win proposition. As incredible as this will appear to scientists outside parapsychology, Utts nonetheless argues that science may have to discard replication—one of its most important safeguards against error and self-delusion—in order to acknowledge and accommodate the psi experimenter effect.

Overall, there is a significant failure in this volume to acknowledge and deal with the many methodological criticisms that have been leveled at parapsychological research. The three “skeptical” chapters aside, methodological criticism is at times reviled, but generally it is just ignored. So much for the “skepticism” part of Support, Skepticism, and Science.

Volume 2, Theories of Psi, is dedicated to explaining psi phenomena by harnessing concepts from modern physics. Skepticism is not addressed to any significant degree. Chapter titles such as “Physics beyond Causality,” “Remembrance of Things Future: A Case for Retrocausation and Precog­nition,” and “Consciousness-Induced Restoration of Time Sym­metry” provide a good idea of what the reader will find here. Yet these efforts are premature: one need first to establish that the phenomena undergoing theoretical analysis actually exist before trying to fit them into theory. For the scientific community at large, such establishment has yet to occur.

Overall, despite the subtitles of “History, Controversy, and Research” and “Support, Skepticism, and Sci­ence,” neither controversy nor skepticism is given their due in this work. It is in large part a celebration of parapsychology by parapsychologists, a celebration freed from the shadow of methodological criticism. Left unaware of such criticism, it is not altogether surprising that Professor Fallon was favorably impressed. However, for responsible critics of parapsychology, there is little in this work that will enlighten them.

James E. Alcock, PhD, is professor of psychology at York University, Toronto, Canada. He is a fellow of the Canadian Psychological Association and a member of the Executive Council of the Committee for Skeptical Inquiry and the Editorial Board of the Skeptical Inquirer. Alcock has written extensively about parapsychology and anomalous experience and has for many decades taught a psychology course focusing on these topics. His most recent book is Belief: What It Means to Believe and Why Our Convictions Are So Compelling (Prometheus Books, 2018).