In April 2016, Houston, Texas, was struck by a massive flood that claimed seven lives. On his blog End of the American Dream, Michael Snyder noted that this was the “Eighth historic flood in this country since the end of September.” While other writers pointed to global warming as a likely explanation for such extreme weather, Snyder saw a biblical sign:

So why is this happening? Some believe that “climate change” is responsible for these bizarre weather patterns, others are pointing the finger at El Nino, and yet others believe that this is a sign that we are approaching “the last days” described in the Bible. What everybody should be able to agree on is that what we are witnessing is highly, highly unusual. (Snyder 2016)

As it turns out, Snyder is the author of several books about the coming rapture, so it is possible his interpretation was influenced by financial self-interest. But he is not the only person seeing religious meaning in the weather. During the Houston floods of May 2015, some conservative observers claimed that the city was being punished for rampant “witchcraft and sodomy,” pointing out that Houston had a “sodomite mayor” (Haraldsson 2015).

In the happier world of falling in love, people often see the hand of fate at work. A Jewish single person is sometimes said to be searching for his or her bashert. The common meaning of this Yiddish word is soul mate, but its original meaning is “destiny or fate.” On the other hand, “star-crossed” lovers—the most famous of all being Shakespeare’s Romeo and Juliet—are astrologically doomed from the start. As deserving of happiness as the lovers may be, things are bound to go badly.

In an interesting recent case of seeing destiny in love, Indiana couple Ashley Goodwin and Kyle Rebman met when Ashley was in the hospital and Kyle, a technician, took care of her. Eventually they fell in love and got engaged. Meanwhile, years earlier Kyle had been diagnosed with kidney disease, and by coincidence it was discovered that Ashley was a match. Without hesitation, she donated a kidney to her future husband, and both made a speedy recovery. They were to be married this past summer (“Couple Getting Married . . .” 2016). According to the report, Ashley believes that it was all meant to be. “What are the chances that he would just so happen to be working when I was sick and that’s how our relationship bloomed, and I was the one to donate the kidney to him?”

The Science of Fate

You might guess there wouldn’t be much psychological research on belief in fate, destiny, or purpose, but you’d be wrong. There is a surprisingly deep vein of studies on these topics in both children and adults. A recent poll found that 38 percent of Americans believe natural disasters are signs from God, but more abstract notions of fate, destiny, or purpose are also very common (cited in Banerjee and Bloom 2015). Humans appear to see fate in many places, and science is here to tell us why—or at least how.

Children Find a Lot of Reasons

Jean Piaget was the first developmental psychologist to propose that children see physical objects as designed for a purpose, and subsequent research has borne him out. Psychologist Deborah Kelemen of Boston University has argued that young children exhibit “promiscuous teleology” (a phrase only an academic could love), meaning they find goals and purposes in almost everything (Kelemen 1999). For example, although older children and adults understand that only living things have goals, young children are less exclusive. A seven- or eight-year-old might say that a mountain is shaped the way it is so that animals have something to climb on. Kelemen suggests that children start out with this promiscuous teleology as a kind of cognitive building block and that as they age, they learn to narrow the identification of goals and purposes to biological things.

In addition to finding purpose in the design of objects, children also see meaning in events. In a 2015 study, Konika Banerjee and Paul Bloom of Yale University tested children’s preferences for natural and purposeful explanations for life events. They selected three groups of participants: young children five to seven years old, older children eight to ten years old, and adults. The participants were given a series of simple life events, such as “Briana’s cat ran away.” Figure 1 shows an example scenario.

In a study such as this, you might imagine the children who chose the purposeful explanations all came from religious households, but Banerjee and Bloom found exposure to religion did not matter. There was no difference in the number of teleological explanations given by children from religious and nonreligious families. The same was true of the adults. Although adults had much lower levels of intentional explanations, their responses were not related to their level of religiosity. 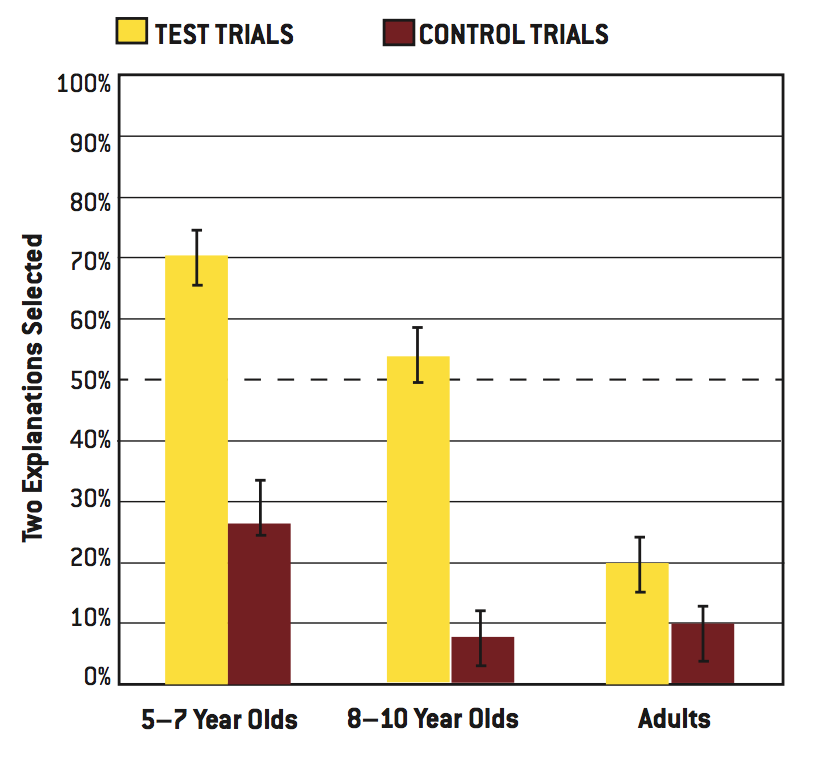 A graph based on the results from Banerjee and Bloom (2015, Experiment 1). The descending yellow bars show that preference for purpose or goal-related explanations decreases with age. (The red bars were a control condition designed to determine whether young children simply had a preference for two explanations over one. The results suggest that it was the teleological nature of the answer that appealed to the children, not merely the number of explanations.)

Banerjee and Bloom concluded that children have a broad tendency to animate the world with purposeful explanations. They suggested that this tendency diminishes over time because children judge a broader set of events to be more “significant” than adults, who eventually come to find many of these things trivial; and with age, people become aware of the social norms that label these explanations superstitious.

The situations used by Banerjee and Bloom were designed to appeal to children, and as a result they were not very good tests of adult beliefs about intention or fate. But several other studies show that when events are considered unusual or personally significant, adults also see meaning, fate, or intention. Furthermore, although religious people are more likely to see destiny in important events (i.e., the hand of God), many atheists also see intention in the world.

The study by Norenzayan and Lee revealed two distinct forms people’s notions of fate can take. The first is the traditional one: God, a deity who acts as an agent controlling events on Earth. The second was simply a belief that—without reference to an external agent—the universe is interconnected and aimed at certain outcomes. In fact, the cultural difference in the interconnectedness form of destiny—most often seen in Asian Canadians—was a more powerful factor than religion.

Norenzayan and Lee also showed how the interconnected universe concept could be induced by suggestion. In a separate experiment, European Canadians who were primed by reading a short essay about the “butterfly effect” later gave more fatalistic explanations for unlikely events.

In a 2014 study, Banerjee and Bloom made things even more real by asking participants to think about an actual important life event they had experienced. In this case, 53 percent of God-believing participants and 24 percent of nonbelievers attributed their personal event to fate. Even among people who were described as “ardent atheists,” 21 percent saw some form of fate involved in their lives (Banerjee and Bloom 2014, Study 2).

In a similar investigation, Bethany Heywood and Jesse Bering found that—consistent with previous research—theists were more likely to explain difficult life experiences by reference to some external intention (e.g., “God’s plan”). But fully half of the thirty-four atheists in the study also gave at least one answer that implied a purpose to the events (e.g., “it was meant to be”; Heywood and Bering 2014).

Why All This Fate?

So, children exhibit “promiscuous teleology,” and even ardent atheists often see destiny in the things that happen. Despite the fact that—if I have not already made this point, perhaps now is the time to say—ideas of fate are supernatural or paranormal. Our scientific understanding of the origins of the universe, of species, and of human behavior do not make room for fate or destiny. These concepts would require some entity or designer standing apart from the natural world and yet controlling it. This is not a scientific idea, but it is one many people still believe—from a very young age.

This is where things get murky. Several researchers in this field hoped to get to the bottom of why this fatalistic view is so common, but their answers have been all rather speculative. Deborah Kelemen’s observations of promiscuous teleology have led her to conclude that young children are “intuitive theists” who see design in the natural world—a characteristic that poses a challenge for science education, which should be aimed at creating a natural understanding of the world, free of designers and gods (Kelemen 2004). But Kelemen is careful not to speculate on whether children’s tendency to see purpose in the world is due to nature or nurture.

In contrast, in his (very interesting and entertaining) book The Belief Instinct, evolutionary psychologist Jesse Bering (2012) argues that our tendency to see design is an “adaptive illusion” that stems from the uniquely human ability to create a “theory of mind,” hypotheses about other people’s thoughts and motives. So Bering comes down on the side of nature, suggesting that our intuitive theism is a built-in product of natural selection.

Teasing apart nature and nurture is always a difficult task. Even the five-year-old children in Banerjee and Bloom’s studies have been in the world for five years, listening to adults yammering on, day in and day out. There must be some socializing effect of all that talk.

A recent cautionary tale shows just how careful we must be when making assumptions about nature vs. nurture. For years, psychology professors have been teaching their students about a classic 1977 study by Andrew Meltzoff and M. Keith Moore, which purported to show that newborn babies were capable of imitating facial expressions, a strong indication of an inherited ability (Meltzoff and Moore 1977).

Meltzoff and Moore’s research always seemed a bit too good to be true, and now a new, more rigorous study in Current Biology shows the original results were probably wrong (Oostenbroek et al. 2016). A report on the new study in Research Digest puts it this way: “Based on their results, the researchers said that the idea of ‘innate imitation modules’” and other such concepts founded on the ideal of neonatal imitation “should be modified or abandoned altogether” (Jarrett 2016).

Human behavior is always a mixture of nature and nurture, and determining the proportions of each is rarely easy. So when it comes to our tendency to see purpose, destiny, or fate in the universe, we must be cautious in our interpretations. The study of European and Asian Canadians, for example, suggests that culture affects the type of fate that people see in the world—God versus an interconnected universe—but as yet, we have less information about how culture and socialization affect our basic tendency to see fate. At the very least we can say that for whatever reason, many young children see a design in the objects and events in the world—a design that goes far beyond science. Whether our intuitive theism is a side effect of a built-in human adaptive advantage, as Bering suggests, or is learned through socialization, this tendency to see the hand of fate represents an important obstacle to achieving a clearer, more scientific understanding of the world.

What Science Is and How and Why It Works

How Can Skepticism Do Better?