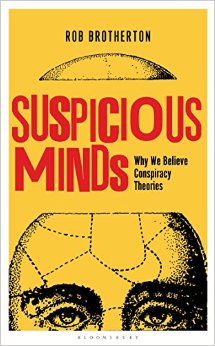 There has been an explosion of academic interest into conspiracy theories in recent years, marked by a flurry of journal articles (see “The Psychology of Conspiracy Theories” series in Frontiers in Psychology, for instance), doctoral theses, and books. Research into conspiracy theories nonetheless remains relatively niche, meaning that only a handful of scholars are well-positioned to produce a comprehensive book on the topic, drawing from empirical research. Rob Brotherton is one of them. Unlike most books on conspiracy theories, Brotherton’s Suspicious Minds does not go into much detail on conspiracies themselves but instead the thinking behind them—why people believe in them. Critically, he explains clearly up front that we are all conspiracy theorists. With this in mind, the book ought to be of interest to everyone.

Adopting a psychological approach, Brotherton explains, “Conspiracism is a lens through which the world can be viewed, and it has the potential to distort everything in its field of view.” Accordingly, he explains that the real culprit behind conspiracy theories is the human brain. We all have one, and this is why we all tend to believe in conspiracies. He clarifies that the prototype of a conspiracy is an unanswered question considered by a person who assumes nothing is as it seems. Those behind conspiracies are seen to be exceptionally competent, and normally not evil. Conspiratorial thinking is founded on anomaly hunting and is essentially irrefutable: “Attempting to refute a conspiracy theory is like nailing jelly to a wall. Since conspiracy theories are inherently unproven, the theory is always a work in progress, able to dodge refutation by inventing new twists and turns.” Notably, belief in one conspiracy theory is found to be a strong predictor of belief in other conspiracy theories—even when they are contradictory. The appeal of conspiracy theories is rejecting “the official story.”

Though drawing mostly from academic research, case studies of real conspiracy theories are present, none more prominently addressed than the MMR vaccine controversy, resulting in the retraction of a study published in The Lancet in 1998 that made the claim that the vaccination causes autism. Less well known, perhaps, is the issue of AIDS denialism. In 1992, businesswoman Christine Maggiore tested positive for HIV. With no medical training or degree, Maggiore pondered the scientific literature on AIDS and concluded it was not caused by HIV. Founding a group called “Alive and Well AIDS Alternatives,” she, with the help of the rock band Foo Fighters, staged a benefit concert. She died of AIDS, having rejected AIDS medicine; her HIV was transmitted to her children, with one of her daughters dying of AIDS before she reached four years of age.

Rich accounts scattered throughout the book underscore the practical implications of beliefs “gone wrong” and the need for improved scientific communication between researchers and laypersons. Discussing the role of expertise in some detail, and with reference to some fun research, Brotherton notes that the world has become more complex and specialized—we increasingly rely on experts to help us make sense of it. The book is very accessible yet goes into a lot of detail on the research methodology used in empirical studies. My favorite method comes from J.E. Uscinski and J.M. Parent’s 2014 book American Conspiracy Theories (Oxford University Press), which analyzed thousands of letters to the editor in the New York Times and Chicago Tribune between 1890 and 2010. It is clear that interest in conspiracies far predates the Internet.

In a lengthy discussion of our love for stories, Brotherton argues that conspiracy theories, ultimately, are stories not unlike those we have been telling each other throughout the ages. “Conspiracy theories are an exercise in connecting dots,” he explains. “Reality is overflowing with dots. To make sense of it, our brain has to be good at quickly figuring out how they are connected. In its relentless quest to turn the chaos around us into meaning, however, our brain can conjure up seductive illusions.” This is known from a wealth of related research, as summarized in Daniel Kahneman’s 2011 book Thinking, Fast and Slow.

Going into detail on recent empirical works, Brotherton convincingly shows that people who are prone to believing that climate change is a myth, that Princess Diana was “taken out” by the British Monarchy, or that Hurricane Katrina was “created” by the Bush administration using secret military weather manipulation technology have other things in common too. Fans of social cognition will be excited to read about intentionality bias, false consensus effect, proportionality bias, and other shortcuts that predict belief in conspiracy theories. To hone in on research into the belief that President Barack Obama is not in fact a U.S. citizen, research findings highlight that this perception increased after he released his birth certificate. Concluding that the so-called backfire effect is the ultimate demonstration of confirmation bias, Brotherton acknowledges, “Being smarter or having access to more information doesn’t necessarily make us less susceptible to faulty beliefs. Sometimes it just makes us better able to explain away unpalatable facts.” Once again reminding us that we are in fact all conspiracy theorists, the book serves as a useful reminder that we could all think more critically.

As we increasingly turn to the Inter­net to help us make decisions on all sorts of things, and as search results be­come iteratively refined based on our preferences, we must strive to better criticize the sources of information we encounter and adopt the point of view of others. This book, with its emphasis on a fun topic likely to be of interest to various parties, ought to help move things forward, if only a little. That is, of course, assuming that the book itself is not thought of as a tool of a conspiracy.

What Science Is and How and Why It Works

How Can Skepticism Do Better?