Every year, Chapman University tells us what we fear the most.

While “What’s your biggest fear?” might seem a psychological riddle, these researchers have got it down to a science, using rigorous polling methods to ask Americans about the most common fears and suspicions that plague them. The project, which is in its third year, offers telling insights about fear of government control and terrorism. For readers of Skeptical Inquirer, the survey covers something else equally compelling: Americans’ seemingly unshakable beliefs in the paranormal and in conspiracy theories. And things are looking … well … pretty bonkers.

According to the new research in the 2016 survey, issued in October, 46.6 percent of Americans believe places can be haunted by spirits; 27 percent believe that extraterrestrials have visited Earth in “our ancient past” (we no doubt can thank the History Chan­nel, in part, for this result); 24.7 percent say aliens have come to Earth “in modern times”; 13.5 percent are eating tacos, answering email, and all the while believing that Bigfoot is real; and a whopping 39.6 percent believe that Atlantis, or something like it, once existed.

Conspiracies were a new addition this year, but paranormal beliefs are categorically distinct from conspiracy theories. For one, conspiracies do happen, whereas ghosts (as far as we can tell) do not. It’s simply when we speak of a massive, and massively unlikely, conspiracy requiring many players pulling off incredibly difficult cover-ups that these theories become less likely than the original story they’re meant to blow wide open. Still, an alarming number of Americans believe in outlandish conspiracy theories. Some are more rational than others, and the survey is designed to fairly assess the nuances, from believing that the government might not be disclosing all the details about the 9/11 attacks (which might not be totally outlandish, and which is vague enough that any unreleased detail about 9/11 might be considered “covered up”) to the idea that the moon landing never happened (which has been completely discredited).

In this study, conspiracy theories were examined particularly as they relate to distrust of the government. For each theory, respondents were asked whether they believe the government is “concealing what they know about” the incident or alleged incident. 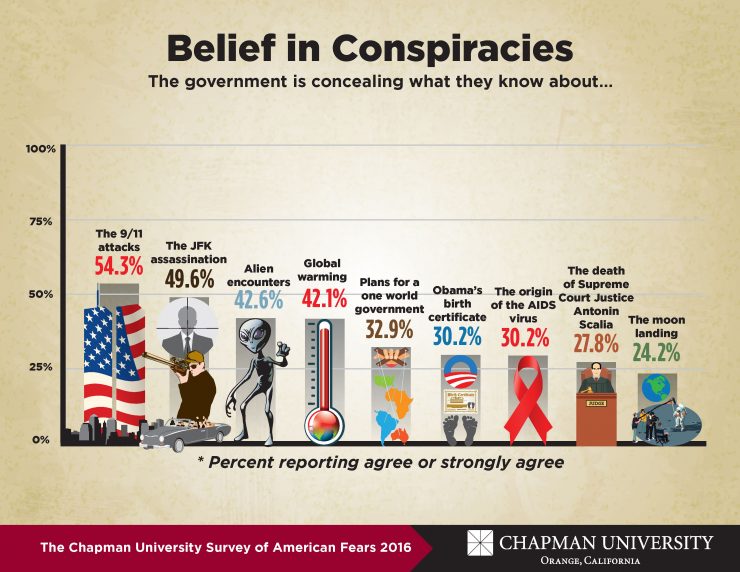 Respondents were most likely to think that we aren’t getting the whole story about the 9/11 attacks (54.3 percent said the government is hiding something there); the JFK assassination came in at second place (49.6 percent); alien encounters are third (42.6 percent think the government is pulling the extraterrestrial wool over our eyes); 30.2 percent still think there’s something up with Obama’s birth certificate even though that issue has been put to rest so hard you’d think we’d euthanized it; and 30.2 percent think something fishy caused HIV (some believe the CIA created the virus that causes AIDS). Finally, 24.2 percent are still hanging on for dear life to the oft-derided view that the moon landing isn’t real.

However, the most exciting part of the study, by far, is about the North Dakota Crash. As each respondent was asked whether they think the government was covering up information about the famous, mysterious aerial wreck, they were given this question: “To what degree do you agree with the following statement? The government is concealing what they know about the North Dakota Crash.” A sizable 32.5 percent of respondents either agreed or strongly agreed. As readers of Skeptical Inquirer will know, the craft in the North Dakota Crash was quickly discovered to be an experimental passenger plane. Its odd circular design was no match for aerodynamics, and unsurprisingly it fell to Earth within a few minutes of its first test flight. Yet 32.5 percent of respondents still believe that the government wants to cover up something about this highly banal tale of ragtag plane hobbyists.

Okay, I lied. That’s not what the North Dakota Crash was. I made it up. And so did the people who designed the study. The North Dakota Crash never existed; the study’s designers merely created a name for an incident that sounded like something mysterious (the description of the event is all mine). Yet even that name—North Dakota Crash—was enough to make over 30 percent of respondents agree that something is up and the government isn’t telling us what it is. But my little trick is a reminder to us, too. If you, having never read even the name “North Dakota Crash,” presumed there was nothing shady going on with it either, you’ve faced your own presuppositions. And if you read my fictionalized account of the crash and took it on face value without looking it up yourself, it’s a good reminder to always corroborate your sources, because even Skeptical Inquirer gets things wrong sometimes. (One reviewer didn’t like Ben Stein’s Expelled, which, while truly one of the worst movies of all time, is also, for all the same reasons, one of the best movies of all time.)

I asked Christopher Bader, the survey’s lead researcher on conspiracy theories and the paranormal, what he made of all these new North Dakota Crash believers.

“I was absolutely shocked by the high levels of belief in the North Dakota Crash,” he wrote via email, “and by the fact that most Americans believe in at least one of the conspiracies we presented. I see this item as the best indicator (better than asking about any particular conspiracy that ‘exists’ in the public consciousness such as JFK or 9/11) of a conspiratorial mindset.”

So why does someone who has never even heard of the supposed crash say he or she is suspicious of it? Said Bader:

I read it as a respondent thinking “Well I don’t know what the North Dakota Crash is—but whatever it is, the government knows more than it is telling us.” Of course, when you try a [misleading] question like this other factors come into play. Some respondents might lie in their response or may actually think they know what the North Dakota Crash is (have it confused with something else). But the amount of belief we found was shocking, even considering the random error such a technique will introduce. It is a worrying sign of the extremely high levels of distrust in the government when people simply assume the government is nefarious.

And these conspiratorial beliefs can have troubling associations in the believer’s personal life. A person who believes in numerous conspiracy theories is more likely to fear their partner cheating on them and also is more likely to buy a gun out of fear—a potentially deadly combination. 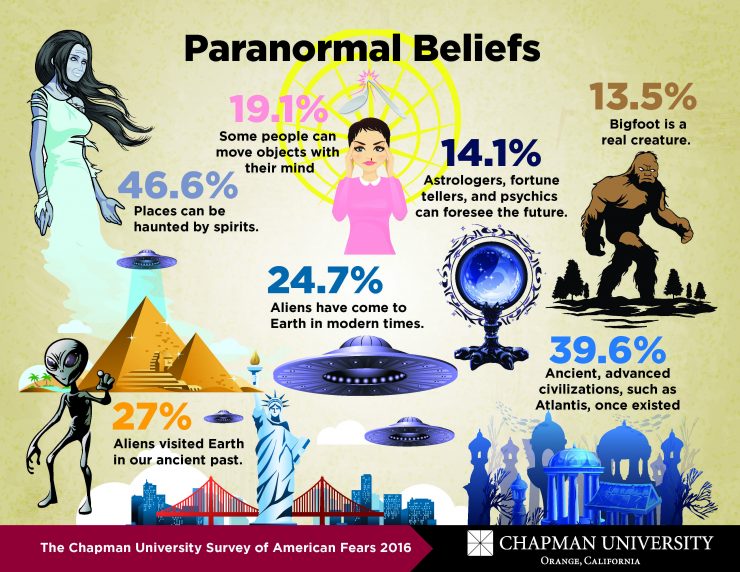 But what of those ghost beliefs? Do they betray other fears and insecurities? Yes, says Bader, who ran an analysis of the data especially for our audience. “There is a significant, positive correlation between fear of ghosts and fear of dying. The more one tends to fear ghosts, the more one tends to fears dying. This is a correlation so I couldn’t claim which comes first—just an association.”

There were other connections, too. I asked Bader if those who believe ET has come to visit also fear undocumented immigrants (a separate portion of the study dealt with American fears of immigrants and xenophobia).

In many ways, the larger report is a warning against painting people with a broad brush: it serves to fight xenophobia and unwarranted fear of Muslim Americans (tragically, 75 percent of respondents said they would or might call the police to report “a large group of people who appear to be of Middle Eastern descent congregating near a fountain”). The issues of paranormal and conspiracy claims, which have long been the focus of our work at Skeptical Inquirer, are finding new, interesting connections with these broader issues of how fear—especially irrational fear—works.

You can read the entire Chapman University Survey of American Fears 2016 on their website at https://blogs.chapman.edu/wilkinson/2016/10/11/americas-top-fears-2016/.

Buzz Aldrin: What That Apollo 11 ‘UFO’ Really Was, And Why He Punched That Moon-Landing Denier

The Legacy Of Fake Bomb Detectors In Iraq

Return Of the Phantom Clowns