I needed a work-study job, and the new physical anthropologist reportedly was coming to the University of Wisconsin–Milwaukee with a large skeletal collection of monkeys, which with luck would need a handy work-study student to clean and organize.

It was the fall of 1965, and I was a junior in college, majoring in physical anthropology. I got the job; there weren’t many work-study students willing to wash, sort, and label slightly smelly and somewhat greasy monkey bones fifteen hours a week. Prof. Neil Tappen not only hired me and, over time, taught me a whole lot of science, he gave me my first lesson in skeptical thinking.

Back in the 1960s, Bigfoot and Yeti cropped up in the tabloids even more often than they do today, along with astrology and alien visitations. One afternoon while we were waiting for class, a fellow student brought up Yetis, which quickly turned into a could-they-be-real conversation. “Well, maybe they’re out there but really good at hiding themselves,” and so on. Prof. Tappen happened by and, as he was the primate expert, we asked him his opinion. Were there undiscovered giant primates living in the wild? Would anyone find them?

“Highly improbable,” was his answer. The claimed evidence was some dodgy footprints and some pieces of leather in the Himalayas that were claimed to be Yeti scalp but which could be just about anything. This was well before DNA analysis put to rest the claims of hair and skin as being from unknown primates. Tappen was small but tough and wiry. He had stalked those now-skeletal monkeys through the jungles and shot them out of the trees. He was a good field biologist who could handle himself outdoors. I pressed him, “But if you had the chance, wouldn’t you go on an expedition to find a Yeti?”

He just looked at me with what I hoped was patience, but it might have been exasperation. “I’ll be first in line for the second expedition,” he commented and then went on his way.

Right. If Yeti or Bigfoot truly were real, someone would have found some really good evidence by now. Once some actual evidence existed, Neil indeed would have been first in line to pack up his field gear and head off into the wild to study this strange new primate—but given the combined improbability of its existence and the lack of good evidence, he wasn’t going to waste his time. Just because the idea of giant primates in relict environments is really cool and you truly want it to be real, it can’t be wished into being.

I received my PhD and taught biological anthropology for several years before becoming a nonprofit director at the National Center for Science Education, which opposed the teaching of the pseudoscience of creation “science.” These activities connected me to  CSICOP, and I was made a fellow in 1988. Then and now, the question of how to identify a claim as potentially valid is at the core of scientific skepticism.

Then, as now, I recommend a classic article by the physicist James Trefil (“A Consumer’s Guide to Pseudoscience,” Saturday Review, 1978, pp. 16–21) that helped me think about the relationship between science and pseudoscience. Sometimes offbeat ideas turn out to be correct, so you can’t just toss aside anything that isn’t mainstream. And any scientist will tell you even more quickly than a purveyor of woo that we don’t yet know everything about how nature or people work: there’s a lot left for science to discover. So how do you distinguish the useful ideas, the potentially good ones, and the worthless?

Trefil suggests thinking of the content of science as being composed of three concentric circles (see Figure 1). In the center are the core ideas of science—the tried and true, repeatedly tested, and secure explanations that we rely on. Heliocentrism is here to stay. So is evolution, thermodynamics, CO2 as a warming gas, and lots more. 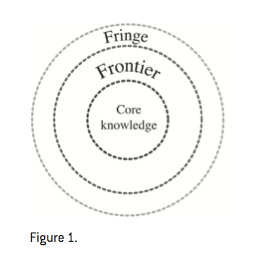 Next is the frontier, where explanations are being proposed and actively tested. These are the hypotheses that university and industry scientists are working on now. Any science journal’s table of contents can provide dozens of unsolved problems. Most of the solutions, alas, will not pan out: mostly you get pebbles, and some of the shiny stuff turns out to be mica, not gold. If the explanation is a good one, though, it will work its way into the scientific consensus and into the core. Otherwise, well, there’s the outermost concentric circle, the fringe, full of ideas with serious problems.

Fringe science is incompatible with one or more core ideas of science. Flood geology, the creationist idea that Earth’s sedimentary deposits are the result of the waters of Noah’s flood, violates a very long list of core principles of geology. “Free energy” machines (you can invest in them on the Internet!) violate the principles of thermodynamics—like all perpetual motion machines, physicists don’t invest in them. ESP? No mechanisms proposed, but worse, no unqualified demonstrations of the phenomenon.

One marker of a fringe idea is that professional scientists aren’t spending time on it; they know it is very unlikely that ideas contradicted by core scientific explanations are going to be useful. The fringe is the land of amateurs, and not necessarily in a good way. Occasionally (rarely?), a fringe idea will make its way into the frontier. Even less often, it will be demonstrated to be a keeper. Continental drift was a decidedly fringe-y idea when first proposed, but gradually evidence built up, and it moved to the frontier. For decades scientists tested and built on the idea, and plate tectonics is now a core idea of geology. Mostly, however, fringe ideas deserve to stay there. But science is open to new ideas—it’s not a closed shop. Still, to make the grade, the explanations have to be valid: your crazy idea has to actually help explain nature.

And my friend Bigfoot? Well, some manifestations of the story are wildly improbable: that Yetis and Bigfoots are relict Gigantopithecus is going to stay on the fringe forever as violating too many core understandings of mammalian population biology. How many individual Yetis would be required to maintain a breeding population for the last ten or twenty million years—without a single fossil, bone, carcass, or reliable sighting? What are the caloric requirements of a large primate, much less a breeding population—and where is that food going to come from in a place such as Bigfoot’s northwest coast forests? Unlike bears, another large mammal, Bigfoot, as a primate, is physiologically incapable of hibernation. What’s it going to eat during the winter? Yeti has the same problem—only squared.

The quickest, back-of-the-envelope way to start analyzing a possible pseudoscience is to see, first, if professional scientists are spending time on it. If none are, that’s a significant sign in itself. But maybe the idea is too new and, yes, scientists tend to be conservative, so professional scientific disregard isn’t a deal-breaker in itself. But what is a deal-breaker is if the idea is incompatible with a well-accepted, core idea of science. Of course scientific explanations can change—but remember, the definition of a core idea is that it is so well tested that it’s not worth continuing to test it. A core idea is used to build new hypotheses and explanations. We doubtless still have things to learn about the solar system, but that the Sun is at its center is not going to change with new data or theory.

If someone comes up with an explanation or concept that flies in the face of really solid science, don’t waste your time. Wait for the second expedition.

Bigfoot and I: Reflections on Forty Years of Skepticism

My Personal Odyssey in Skepticism

How I Got Hooked on the Skeptical World

Skeptical Activism from the Bottom Up