I recently read your book Scientific Paranormal Investigation: How to Solve Unexplained Mysteries about the mistakes that ghost hunters make using EMF detectors during investigations and how they are not productive. However, I always understood that EMF meters/readers were used to measure EMF levels because high levels of EMF could cause hallucinations that result in paranormal-like experiences. Any thoughts on this?

Many ghost hunters, including the T.A.P.S. team on the television show Ghost Hunters, use EMF detectors to search for electromagnetic fields because they believe that intense magnetic fields can create hallucinations, which in turn might create the illusion of ghosts. The basis for this theory comes primarily from research done by a Canadian cognitive neuroscientist, Michael Persinger. He found that hallucinations (such as out-of-body experiences) could be triggered by stimulating specific areas of the brain with fixed wavelength patterns of high-level electromagnetic fields.

He suggested that EMFs might therefore be responsible for everything from UFO sightings to religious apparitions to ghosts. As researcher Chris French notes:

The proposal is that fluctuations in the earth’s background magnetic field can interact with the temporal lobe, especially in individuals with a particularly sensitive temporal lobe, to produce a sense of a presence and visual hallucinations. . . . This explanation offers the intriguing possibility that such transcerebral magnetic stimulation may lie behind many reports of ghosts and hauntings. (French and Stone 2014, 99)

It’s an interesting theory. Unfortunately for the ghost hunters, it’s just a theory—not a proven effect. In fact, there’s little or no evidence to support the idea that EMFs create ghosts. Ghosts are not being seen in Persinger’s experimental laboratory in Ontario; they are being seen in abandoned hospitals and suburban basements. There is simply no evidence that common household appliances can generate EMFs of the frequency and power that induce hallucinations in a clinical setting. 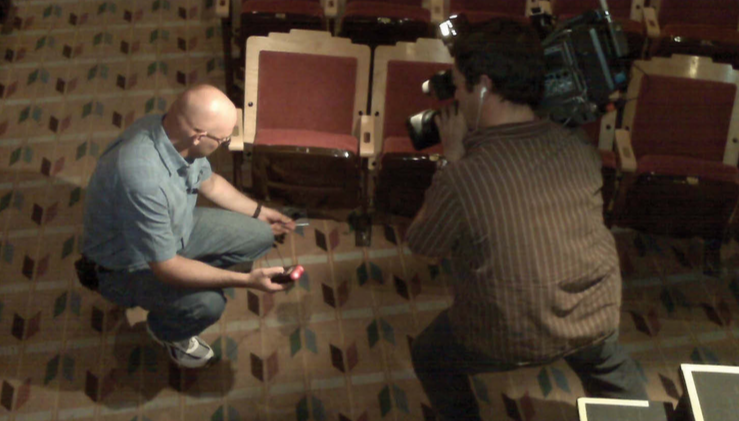 The author uses an EMF detector to demonstrate for a television crew how electrical outlets can create false “ghost” readings at the historic KiMo theater in Albuquerque, New Mexico. Photo by Larry Barker.

Indeed, Yale neuroscientist Steven Novella says that the theory of EMFs as an origin for ghosts is “speculative at this point.” The electromagnetic stimulation used by Persinger

has to be focused, and at a certain frequency in order to have this effect. It seems unlikely that environmental electromagnetic fields would be fine-tuned just enough to cause this effect. . . . It’s an interesting idea; I just don’t think it’s terribly plausible. At present, while we can certainly duplicate it in a lab, I’m not aware of any evidence to suggest it actually happens out there in the world. (Novella 2010)

Richard Wiseman, in his book Paranormality: Why We See What Isn’t There, notes that several researchers tried to replicate Persinger’s results. A team of Swedish psychologists led by Pehr Granqvist

became worried that some of Persinger’s participants may have known what was expected of them and their experiences could therefore have been due to suggestion rather than the subtle magnetic fields. To rule out this possibility in his work, Granqvist had all of his participants wear Persinger’s borrowed helmet, but ensured that the [magnetic] coils were only turned on for half the participants. Neither the participants nor the experimenters knew when the magnetic fields were on and when they were off. The results were remarkable. Granqvist discovered that the magnetic fields had absolutely no effect. . . . Worse was to come for Persinger. In 2009, psychologist Chris French and his colleagues from Goldsmiths College in London carried out their own investigation into Persinger’s ideas by hiding coils behind the walls of a featureless white room, and then asking people to wander around the room and report any strange sensations. Seventy-nine people visited this most scientific of haunted houses for about 50 minutes each. Following in the footsteps of Granqvist, French and his team ensured that the coils were only switched on for half of the visits, and that neither the participants nor experimenters knew whether the coils were on or off. The magnetic fields had absolutely no effect on whether or not people reported a strange experience. (Wiseman 2011, 219–220)

In their rush to accept this “scientific” explanation for ghost sightings, investigators extrapolate far beyond the evidence. Until it can be demonstrated that generalized, nonclinical EMFs can create the psychological perception of ghostly phenomena, there is no investigative value in detecting such fields. If ghost investigators are certain that common household EMFs can create ghost hallucinations, there are simple ways to test that theory. If Persinger is correct and EMFs are in fact related to ghostly experience, it’s because the EMFs are causing the illusion of ghosts. If ghosts exist, they may or may not be related to EMFs (there’s no evidence showing they are), but ghost hunters who cite Persinger’s research in support of their methods are unwittingly undermining their own arguments: If you are sure that ghosts are real (and not the product of EMF-induced hallucinations), there is no logic or point in using a device to detect those EMFs.

Fake News and Fake Science in the Age of Misinformation

The Return of the Fairies