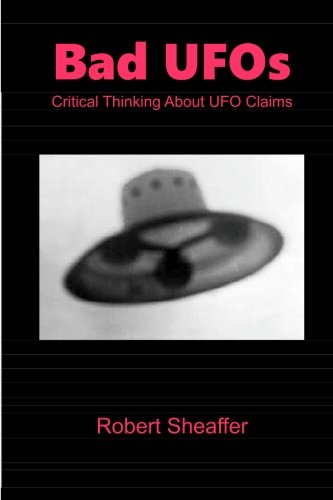 Robert Sheaffer is one of the—if not the—world’s top experts on the subject of unidentified flying objects and claims of extraterrestrials, and he shares that knowledge in his new book Bad UFOs. A tireless gadfly to generations of UFO promoters too numerous to count, Sheaffer is author of UFO Sightings (published in 1998 by Prometheus Books) and until recently a regular columnist for this magazine. There are perhaps more in-depth scholars of claims of specific aspects of UFO reports, but Sheaffer is in a league of his own when it comes to encyclopedic knowledge of a surprisingly diverse topic.

Over the course of ten chapters and nearly 300 pages, Sheaffer covers an astonishing variety of claims, including the so-called “mystery missile” seen off the California coast in 2010; the Belgian UFO flap that author Leslie Kean unwisely endorsed; a plethora of UFO videos (debunked by Sheaffer, Mick West, and others); Steve Greer’s UFO crusade, doomsdays, and much more. Though many “classic” and high profile reports and sightings are decades old (stale, widely debunked stories by Travis Walton, Whitley Strieber, Betty and Barney Hill, and so on), it’s important to remember that UFOs remain the subject of discussion to this day.Though UFO reports have lost some of their profile (many UFO videos are widely debunked online within hours or days), new ones still surface, and Sheaffer is often on the front lines of analyzing them.

One of the most important chapters—and unfortunately one of the shortest—is the final, titled “UFO Skeptics Are from Mars, UFO Proponents Are from Venus.” This celestial reference plays on a popular—if somewhat pseudoscientific—relationship book title, and it really is true that skeptics and believers approach evidence in different ways and through different prisms, and nowhere is that more obvious than in the field of UFOs. Even when UFO proponents’ outlandish claims have been definitively debunked (for example in the Roswell slides case; see Sheaffer’s “The ‘Roswell Slides’ Fiasco: UFOlogy’s Biggest Black Eye,” SI, September/October 2015), they rarely acknowledge their mistakes or demonstrate a sincere resolve to avoid them in the future. This problem plagues many areas of the “unexplained” but is particularly common in UFOlogy.

Bad UFOs is especially useful for those who want to stay up to date on UFOs and associated claims. This is crucial because “mysterious” UFO reports may be conclusively solved years (or even decades) after they occur, for example through hoaxer confessions, improved techniques for analyzing photos and videos, declassified information, and so on. It is rare for books to be updated with the new information, and updates to UFO proponent books (the vast bulk of publications on the topic) are made slowly and grudgingly (if at all). Sheaffer performs a huge—and largely unappreciated—public service in his recently retired SI “Psychic Vibrations” column, in Bad UFOs, and on his blog (at www.debunker.com) of keeping his audience current on old and new claims.

The Fires of Creationists, and Rallying for Science

Burzynski Sanctioned by Texas Medical Board

Hans Rosling Brought Data to Life, Showed Our Misconceptions about the World

Murder by Darkness: Does Mammoth Cave’s Specter Harbor a Secret?

The Farce Known as ‘FC’

The Monster of Florence: Case Closed? The Terrifying Story of the Most Infamous Ritual Murders inItalian History, Part 1

The March for Science