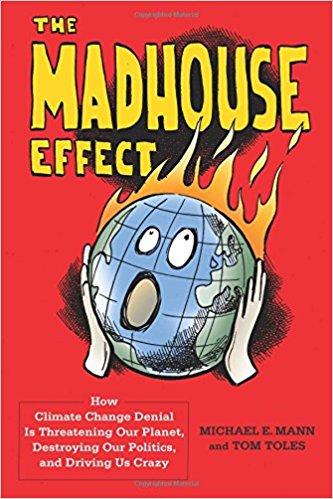 President Trump—who has called climate change a “hoax” and has pulled the United States out of the Paris climate accord—gives more urgency to reading Prof. Michael E. Mann and Tom Toles’s excellent book, The Madhouse Effect, a short primer on climate change and its denial.

In a brilliant collaboration between a climate scientist known for the “hockey stick curve” that shows unprecedented global warming and a Pulitzer Prize–winning cartoonist at the Washington Post, Mann and Toles complement each other’s work in chapters ranging from climate warming science explanations to the stages of its denial to making action plans for the future.

The chapter on the war on climate science is particularly enlightening, briefly tracing the history of the climate science doubters, many of whom, including scientists, were paid lavishly by fossil fuel advocates. Mann, the Distinguished Professor of Atmospheric Science and director of the Earth Systems Science Center at Pennsylvania State University, isn’t above being a bit snarky at times in his writing and includes this quote from writer Upton Sinclair: “It is difficult to get a man to understand something, when his salary depends on his not understanding it.”

Mann, who spoke at the Committee for Skeptical Inquiry’s CSICon skeptics’ conference in Las Vegas last October and is scheduled to do so again this year, also relates his own involvement in controversies over climate change studies, including Virginia’s former Attorney General Ken Cuccinelli’s ill-fated lawsuit against the University of Virginia over government-funded research on climate change by Mann. A lower court ruled that Cuccinelli provided no evidence of wrongdoing. One of Toles’s cartoons drawn at that time on that issue is included in the book.

Toles’s cartoons indeed provide fresh text breaks that illustrate what Mann writes about. There are just enough of them to provide occasional chuckles while reading about the serious science, history, and future of climate change.

Early in the book Mann explains how the word skepticism has been misused by climate change deniers and briefly explains scientific skepticism. He points out that the exploited weakness in science is the public understanding of it. “Deliberate confusion can be sown under a false pretext of ‘skepticism,’” Mann writes. “And the scientific process is continually under assault by bad-faith doubt mongers.”

In another chapter, they skewer most of the proposed geoengineering ideas to combat global warming, arguing that the costs are exorbitant, the technological challenges difficult, and the adverse regional climate effects real. Mann convincingly argues that geoengineering schemes will prove the law of unintended consequences.

The book lacks a glossary, which would have been helpful in briefly explaining scientific terms, identifying numerous organizations that are hard to keep straight as being for or against climate change science, and individuals. But Mann does include brief explanations within the text, so this omission is minor.

The authors remain hopeful about the ability of humans to adapt and help avoid the destruction of our planet, encouraging carbon pricing and promoting environmental sustainability in general. But Mann does say there’s an urgency. “Dreams of slowly adapting to climate change,” he writes, “will have to be replaced with the hard reality of an ever-escalating pace of disruption and unpredictability.”

By the time the reader reaches that last chapter explaining “The Path Forward,” the subtitle of the book will make perfect sense: “How Climate Change Denial Is Threatening Our Planet, Destroying Our Politics, and Driving Us Crazy.” If a reader has time for just one book explaining climate change science and denial, The Madhouse Effect is the one to read.

Robert Ladendorf was the chief operating officer of CFI/L.A. As a freelance writer, he co-authored The Mad Gasser of Mattoon in the July/August 2002 Skeptical Inquirer.