Since 1982, Gallup has been asking “Which of the following statements comes closest to your views on the origin and development of human beings?” and presenting respondents with three options (not always in the same order, to control for order effects):

For brevity and consistency with the terminology in Gallup’s latest report, let’s call the views expressed by these statements the “creationist view,” the “guided evolution view,” and the “secular view,” respectively. 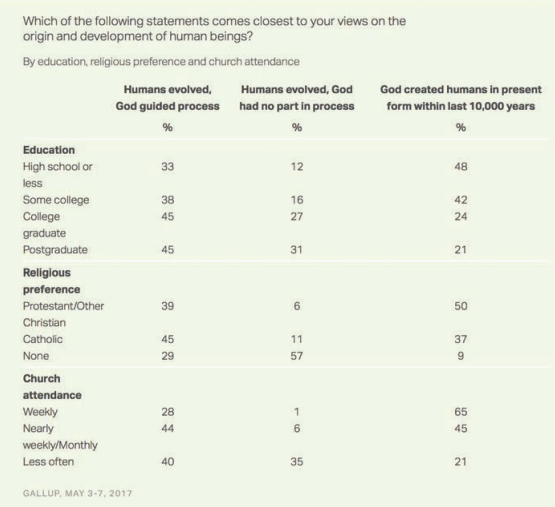 As a result of the fall in support of the creationist view, the guided evolution view is now equally popular, with a 38 percent level of support. That was the same level of support it enjoyed in 1982, although it rose as high as 40 percent and sunk as low as 32 percent in the intervening years.

The level of support of the secular view is now at 19 percent. That represents a substantial increase, for it began at 9 percent in 1982 and remained relatively flat from then until the turn of the century. But it more than doubled between 1999 and 2014, when it first reached the 19 percent level.

There are limits, of course, to what can be inferred from public opinion poll data in general. But there are features of Gallup’s question in particular that make understanding the results less than straightforward—one inherent in the options offered to respondents and one resulting from the options not offered.

It seems likely that old-Earth creationists would tend to accept the creationist view—perhaps grudgingly—rather than endorse the common descent of humans and the rest of life. It is harder for creationists to reconcile common descent than the antiquity of the universe with their interpretation of the Bible.

The secular option in Gallup’s question, in contrast, is probably not designed to appeal only to atheists and agnostics. But its wording—emphasizing, in a way that may appear dogmatic, God’s playing no part in evolution—may deter respondents of faith from accepting it, even if they have no quarrel with any of the science.

As a result, the guided evolution option is likely to attract respondents who, on the one hand, accept common descent and, on the other hand, believe in God—a category so heterogeneous that it includes both Michael Behe and Kenneth R. Miller, who testified on opposite sides in the Kitzmiller v. Dover “intelligent design” trial in 2005.

It would be a mistake to think that Gallup’s respondents are firmly committed to, and wholly sure of, their responses. Answers that don’t match the three options and refusals to answer are recorded as “Other/No opinion” (5 percent in 2017), but they are not explicitly invited. That demonstrably makes a big difference.

In 2009, George F. Bishop and his colleagues conducted a survey using a modified version of the Gallup question, which added two more options to capture ambivalence and uncertainty:

They found that the new options attracted almost a quarter of respondents: 10 percent of respondents were ambivalent—not regarding any of the standard Gallup choices as appealing—and 14 percent were uncertain.

This is not to criticize Gallup, which deserves credit, especially for its persistence in asking the same question for thirty-five years. But it is a reminder that poll results must be interpreted with care, to compare them with the results from different polls, and above all to look at trends rather than at individual polls.

While creationism may be at a new low as measured by Gallup’s question, it is important to remember that it remains alive and well, inspiring constant attacks on the teaching of evolution in statehouses, courthouses, and classrooms across the country. There is certainly no cause for complacency.