The first I heard about a shadowy UFO research program operated by the U.S. Defense Intelligence Agency (DIA) from 2007–2012 was when I was interviewed by New York Times reporter Helene Cooper on December 12, 2017. I was not named in the subsequent two articles (Cooper et al. 2017a; 2017b) except that one included my input under an introductory statement about UFO sightings. It read: “Experts caution that earthly explanations often exist for such incidents, and that not knowing the explanation does not mean that the event has interstellar origins” (Cooper et al. 2017b).

The DIA had not acknowledged the program’s existence until it was revealed by Cooper and two coauthors, reporter Ralph Blumenthal and a credulous flying-saucer promoter and writer, Leslie Kean (see, e.g., Kean 2010). Had I known the latter was involved, I would have warned the New York Times to tread carefully.

Indeed, the respected newspaper did come in for some deserved criticism, including from New York magazine for “implying that extraterrestrials are real.” The magazine added, “For ufologists who had dreamed of being taken seriously by the mainstream media, the story was a dream come true” (Wise 2017). Most problematic was the second of the articles, despite its disclaimer.

That article told of a 2004 incident that occurred when two Navy F-18 fighter planes were sent to investigate a mysterious object and it suddenly accelerated—like nothing the airmen had ever seen before. Intrigued, I contacted Major James McGaha, with whom I have often worked, especially on UFO cases. A former U.S. Air Force special operations pilot, he is also an astronomer and so has a unique knowledge of the sky. We set to work on the case.

According to the New York Times article, navy airmen—Commander David Fravor and Lt. Commander Jim Slaight—had been with a squadron on a training mission over the Pacific some 100 miles from San Diego. The date was November 14, 2004. The incident began when Fravor was radioed by a radar operator on a Navy cruiser, the USS Princeton, asking them to investigate some unknown objects at a particular vector. He was accompanied by another F-18. 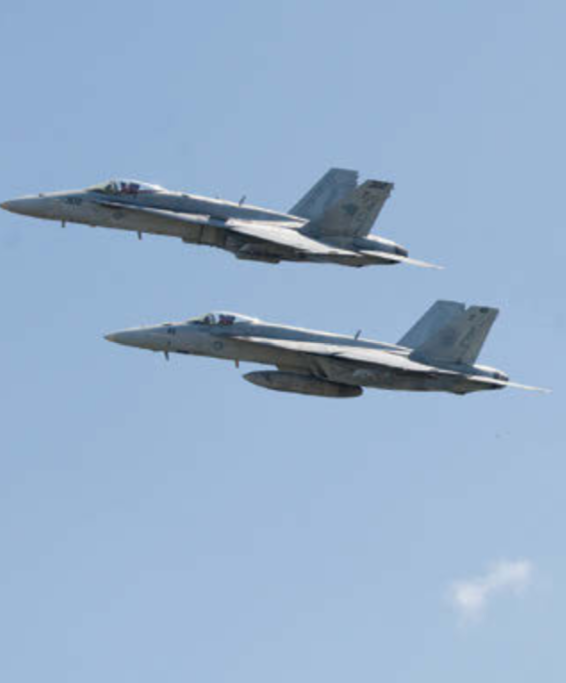 When the two planes arrived at what is termed “merge point”—that is, so close that the Princeton’s radar could not distinguish them from the unknown object—the pilots saw nothing. But when Fravor looked down he saw the sea churning. Was this from a crashed aircraft as Fravor first thought or from, he would later suggest, possibly a submarine (as from the Nimitz’s own carrier strike group)?

Unfortunately, there are different versions of Fravor’s subsequent experience. First the New York Times, mentioning the churning water, states that “some kind” of white, oval aircraft about thirty to forty feet long was “hovering 50 feet above the churn.” But as Fravor descended, the object ascended toward him. He said, “We were at least 40 miles away, and in less than a minute this thing was already at our cap point” (Cooper 2017b).

Yet something is wrong in the information here: How could someone see what a forty-foot object was doing from forty miles away?

Another version of Fravor’s experience is provided in a “truly curious document that tells Fravor’s story in the form of a military-style briefing” with portions blacked out to give a pseudo top-secret appearance (Wise 2017). It is in fact a third-person account of an interview with Fravor, produced by a fringe-ideas group called To the Stars Academy of Arts and Science. That group includes Luis Elizondo, who had previously headed the Pentagon UFO study (actually named Advanced Aviation Threat Identification Program), mentioned earlier. The group’s founders include former pop singer Tom DeLonge and former Scientologist and parapsychologist Harold E. Puthoff (Austin 2017).

In this second, earlier report (“Pilot report” 2017), which calls Fravor “Source,” the unidentified object above the churning water “traveled from left to right over the disturbed water at an altitude of approximately 1000 to 3000 feet”—not fifty feet above, as the other version had reported. (Investigators can scarcely be expected to explain some occurrence when what is alleged is presented with such contradictions and seriously incomplete and disjointed reporting.) Fravor went on to say that as the second plane aggressively dropped and maneuvered, to catch up with the object, it behaved “as if it knew or somehow anticipated what they were going to do and even pointed toward them!” To us, it sounds almost as if the airmen were deliberately being buzzed by a reconnaissance drone! Were they being tested as part of their training?

Whatever actually happened, the UFO then disappeared, Fravor said, having “accelerated like nothing I’ve ever seen” (Cooper et al. 2017b). When the two jets returned to their aircraft carrier, the USS Nimitz, something interesting occurred: “… everyone on the ship had learned of Commander Fravor’s encounter and was making fun of him” (Cooper et al. 2017b). They were playing alien movies such as Men in Black and The X-Files on the ship’s onboard closed-circuit TV (“Pilot report” 2017). Given that “everyone” made fun of Fravor, one must wonder why: Did he have a reputation as a UFO believer, or did they know something he didn’t?

Fravor says another group of F-18s “also encountered the same object later the same day.” Viewing a video from that flight, “Source [Fravor] identified the object affirmatively as the one they saw earlier” (“Pilot Report” 2017). Apparently this video—not one from Fravor’s plane—was the one released by the To the Stars group.

It seems possible that Fravor’s sighting has become merged with the separate incident shown by the video. Both involve an object described as looking like a “tic-tac” candy mint—without apparent wings, rotors, windows, or other features—and completely white. This is indicative of an object seen on an infrared video (like the video in question). Thus, there may well be confusion as to what was supposedly seen by Fravor and what had been related to him. Such confusion could easily have occurred over the intervening thirteen years.

Either the first or second object in question, if seen only on a video screen, might well have been a drone or distant airplane. Even if it were too far away to be visible, its heat signature could have been viewed by infrared. Another possibility was given by Fravor himself. Interestingly, before the planes were sent to the site, the controller had made sure they were not weaponized. After the encounter, Fravor had “initially thought that perhaps this was an unannounced, classified missile test by a U.S. Navy submarine,” but he now concludes, “There is no way any aircraft or missile that I know of could conduct maneuvers like what we saw that day” (“Pilot report” 2017). Nevertheless, there is confusion over just what occurred. Fravor insists, “I know what I saw” (quoted in Finucane 2018), while just as surely admitting, “I have no idea what I saw” (quoted in Cooper et al. 2017b). We have observed this many times: A person has mistaken perceptions, or he experiences something that seems unusual, and soon is insisting that he knows what he saw, ego becoming involved. In fact, he only knows what he thinks he saw, and that can change over time.

In any event, this brings us to the video in question, which shows an object’s rapid acceleration to the left and disappearance from the video screen. What we see on the video is probably a trick of optics, according to Major McGaha. He believes the sudden leftward-zooming of the object resulted from the camera having momentarily reached the limit of its panning ability, at which time the F-18 was banking. This created the onscreen illusion that the object suddenly shot away. As corroboration, McGaha notes that the angle of the object’s moving off the screen is correlated to the bank angle of the F-18. What was no longer viewed was presumed to have disappeared at a tremendous speed.

As it happened, this was Fravor’s “first military assignment as a pilot for the U.S. Navy’s F-18 Super Hornet.” It obviously rattled him. As he was stung by being made fun of on returning to the Nimitz, he “made detailed written notes of the incident” that he mailed to an aunt, noting, “Keep this because this is important stuff about some real X-Files shit” (“Pilot report” 2017). No one was going to tell him he could have been mistaken about his experience—which, after all, appears to have been a series of misunderstandings and misperceptions.

It seems that To the Stars is trying to shroud Fravor’s account in a spooky fog of faux top secrecy. This is a dicey strategy given Fravor’s prominence in online UFO circles, and gives the impression that Elizondo’s company is repackaging timeworn tales from the internet as freshly revealed government X-files. And, by extension, (it) calls into question the Times’ wisdom in taking his claims about extraterrestrial encounters at face value. (Wise 2017)

To recap, we suggest that several things were going on during what was, after all, a training mission of the USS Nimitz carrier strike group. We believe the churning water Fravor first saw was caused by a submerging sub; that the sightings of a UFO above the water (variously reported)—which hovered, then came toward one pilot—could have been those of a reconnaissance drone; that there may have been confusion (then and later) over the object or objects caused by the admixture of visual sightings with infrared video viewing; and, finally, that one video image showing an object suddenly zooming off screen was likely caused by the plane’s banking while the camera was stopped at the end of its sweep.

If UFO proponents claim inconsistencies in our scenario, we shall point out confusion and incompleteness in the reports. Apparently not only had the incident not been considered serious enough to have warranted a debriefing of Fravor—let alone of the several other pilots and radar operator—but most of the carrier group’s personnel at the time regarded Fravor’s response as laughable. Major McGaha and I regard the entire incident not as evidence of an extraterrestrial encounter but as a comedy of errors involving the pilots.

Progressophobia: Why Things Are Better Than You Think They Are

Trauma and Taboo: Traumatic Memories Are Alive and Well

Percival Lowell and the Canals of Mars

The Curious Question of Ghost Taxonomy

Sorry, ‘Theistic Science’ Is Not Science

Why Did We Call Prince Charles Foolish and Immoral?

A Doctoral Dissertation on a Geocentric Flat Earth

Why We Can’t Acknowledge Progress