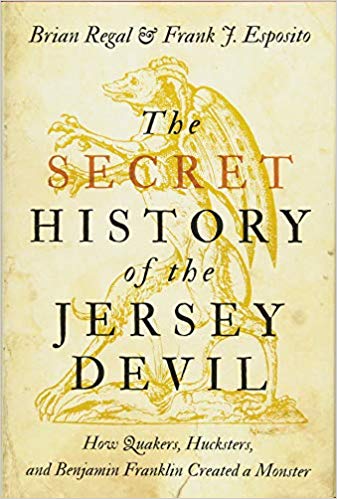 Leeds came over from England in 1676 as a Quaker, but he left the Friends and became an Anglican. This led to acrimonious relationships between him and his former Quaker brethren. This was especially so when he began publishing an almanac that contained material the Quakers found offensive. As was the style of the time, the opponents on each side called each other “devils” and, when printing techniques were advanced enough, illustrated their screeds with wood block cuts of sort of devil-looking creatures. In Boston in 1638, Anne Hutchinson gave birth to “a disturbing mass that bore little resemblance to a child” (p. 15). Her child was transformed in legend into a monster. In the 1730s in New Jersey, another legend sprang up concerning a witch named “Mother Leeds” who—you guessed it—gave birth to a “hideous beast” that a few years later killed “both parents and head[ed] off into the woods” (p. 5). Perhaps coincidentally, in 1730 Benjamin Franklin published a satirical story titled “A Witch Trial at Mt. Holly” lampooning witch hunting that was set in New Jersey. Regal and Esposito speculate that this story, along with the case of Anne Hutchinson, formed the basis of the Jersey Devil legend.

After Daniel Leeds died, his son Titian took over the almanac business and came into conflict with Benjamin Franklin, a much more famous almanac publisher. In the course of that dispute, Franklin satirically contended that Titian had died and his (Franklin’s) verbal jousting partner was the spirit of Titian. This could have reinforced the connection between the Leeds name and something occult. If that was all there was, I wouldn’t be writing this review and you wouldn’t be reading it. After the end of the eighteenth century, mention of the Jersey Devil pretty much disappeared. The legend cropped up here and there every now and then but had largely faded from public consciousness.

The legend reappeared in the late nineteenth century. It gained new life from eyewitness reports. In an especially dramatic example, a train engineer reported in 1893 that his train had been attacked by a strange flying creature with a monkey-like face. When it was suggested that the witness had misperceived an owl, he of course denied it. But that is certainly a plausible explanation. Regal and Esposito do not mention it, but the misperception of an owl has led to at least one other legend of a monstrous creature, the Mothman (see Joe Nickell’s column, Skeptical Inquirer, March/April 2002). In any event, this report was followed by others—not frequently but often enough to generate interest and awareness on the part of the New Jersey public. Then in the winter of 1908–1909 mysterious footprints began to appear in New Jersey. They were said to be those of some unidentified beast.

It was these sorts of reports in the press of the day that, in late 1908, reached the eyes of Norman Jeffries, a promoter who worked for Charles A. Bradenburgh who just happened to own the not-then-doing-so-well “Dime Museum” at Ninth and Arch Streets in Philadelphia. Since in reality there was no Jersey Devil, Bradenburgh, following in the footsteps of P.T. Barnum, simply created one. A live kangaroo played the part. A taxidermist named Hope “painted stripes on the kangaroo and attached a pair of homemade wings to the poor creature.” Then “Jeffries hired a Ringling Brothers Circus clown named George Hartzell and some of his friends to act as monster hunters and go out on an ‘expedition’ to catch the fiendish beast” (p. 78), which, of course, they did, after much commotion involving guns firing and the hunters screaming. The “monster” was displayed at Bradenburgh’s museum and attracted large crowds. It didn’t last long, and the kangaroo hoax was soon revealed, but the money had been made. Hoax or not, the Devil was back in the public consciousness, where it has remained to this day. As is the case for various other cryptozoological creatures, the only evidence for the Devil’s existence is eyewitness reports. At present there are frequent monster hunting expeditions into the Jersey pine barrens in search of the monster. It will not come as any surprise to the readers of this journal that these expeditions produce eyewitness reports of the Devil.

The Secret History is more than a historical account of the development of the devil legend. The authors integrate the devil legend with two different historical trends. In the last two chapters, they note that seventeenth- and early eighteenth-century tracts often included images of monsters that bore a resemblance to what the Devil is supposed to look like—bipedal creatures with wings and grotesque animal-like heads, often with horns. There is then a discussion of nineteenth-century reports of sea monsters and how these relate to the Devil. Most originally, there is also a discussion of the long-lasting fascination with true medical “monsters”—deformed children and adults—and how these may have informed beliefs about the Devil.

The book is well referenced with citations to works from the sixteenth through the nineteenth centuries as well as citations to relevant newspaper articles from the late nineteenth and early twentieth centuries when the devil legend took on its modern form. If anything disappointed me, it was the discussion of the mysterious footprints in the snow that were sighted throughout New Jersey in the winter of 1908–1909. I’d heard the story of these footprints and hoped that the book would shed some light on what was actually going on: Were they hoaxes, misperceptions of animal tracks, or what? The authors do make reference to the tracks as an important component of the devil legend but go no further. It would have been interesting to read a more detailed account of the original reports of this phenomenon. This said, the book is certainly not credulous when it comes to the Devil. The authors are fully aware of the problems with the type of evidence that cryptozoologists take as proof for nonexistent creatures.

While the Jersey Devil is older than any of its cryptozoological cousins mentioned at the start of this review, it shares many of the same characteristics—belief reinforced by misidentification, hoaxes, and, most recently, commercial firms offering monster hunting tours. It differs in that it has an early history steeped in real events involving real people—one a famous American Founding Father. Regal and Esposito have done an excellent job of telling the story of this creature.