Atop a small hill south of Santa Fe, New Mexico, just far enough east of Interstate 25 not to be obvious from the highway, rises a large multistory structure. Its adobe-like earth tones and setback style remind you of the great Southwest pueblos. But something far more modern is going on there. This is Santa Fe Studios, built in 2011 and home to a variety of movie and television productions, all part of New Mexico’s burgeoning filmmaking industry.

We visited there one day recently to see Ann Druyan, Neil deGrasse Tyson, and colleagues filming the second season of their television science series Cosmos. The first Druyan-Tyson Cosmos (Cosmos: A Spacetime Odyssey) aired in 2014 to much acclaim. (In addition to its other honors, our Committee for Skeptical Inquiry gave it CSI’s Robert P. Balles Prize in Critical Thinking.) That series was of course a fresh incarnation of Carl Sagan’s original blockbuster Cosmos series and book of 1980. Sagan and Druyan were husband and wife, and they worked together on that original series. So in a way, the new thirteen-episode Cosmos: Possible Worlds, to premier on multiple Fox and National Geographic Channels in the United States and at least 171 other countries in Spring 2019, is the third incarnation of the Cosmos brand, all with Sagan-esque origins and style.

With all this luminous history in mind, we somewhat nervously step inside the vast studio building. Vanessa Goodwin, Druyan’s assistant, shows us around. First stop is the Art Department. There in a large open room artists work at desks and computers surrounded by walls filled top to bottom with photoboards of what is to be filmed. Hundreds of oversize images of everything from ancient Mesopotamian cities to today’s Amsterdam to future interstellar spacecraft adorn the walls. Tyson appears in the middle of some of them, but he’s CGI’d in. The filming hasn’t been done yet. The sites in Europe and elsewhere haven’t been visited. Virtually every scene of all thirteen episodes is pictured, or at least plausibly envisioned, on these walls. This is essential in planning something so complex, Goodwin points out.

Down one hall is a long, well-lit costume room, where we see ready-made costumes for all manner of characters to appear in the series. I see outfits for Neanderthals, for historical figures such as Galileo, Darwin, and Christopher Huygens … and some more modern characters that they hope may surprise you. 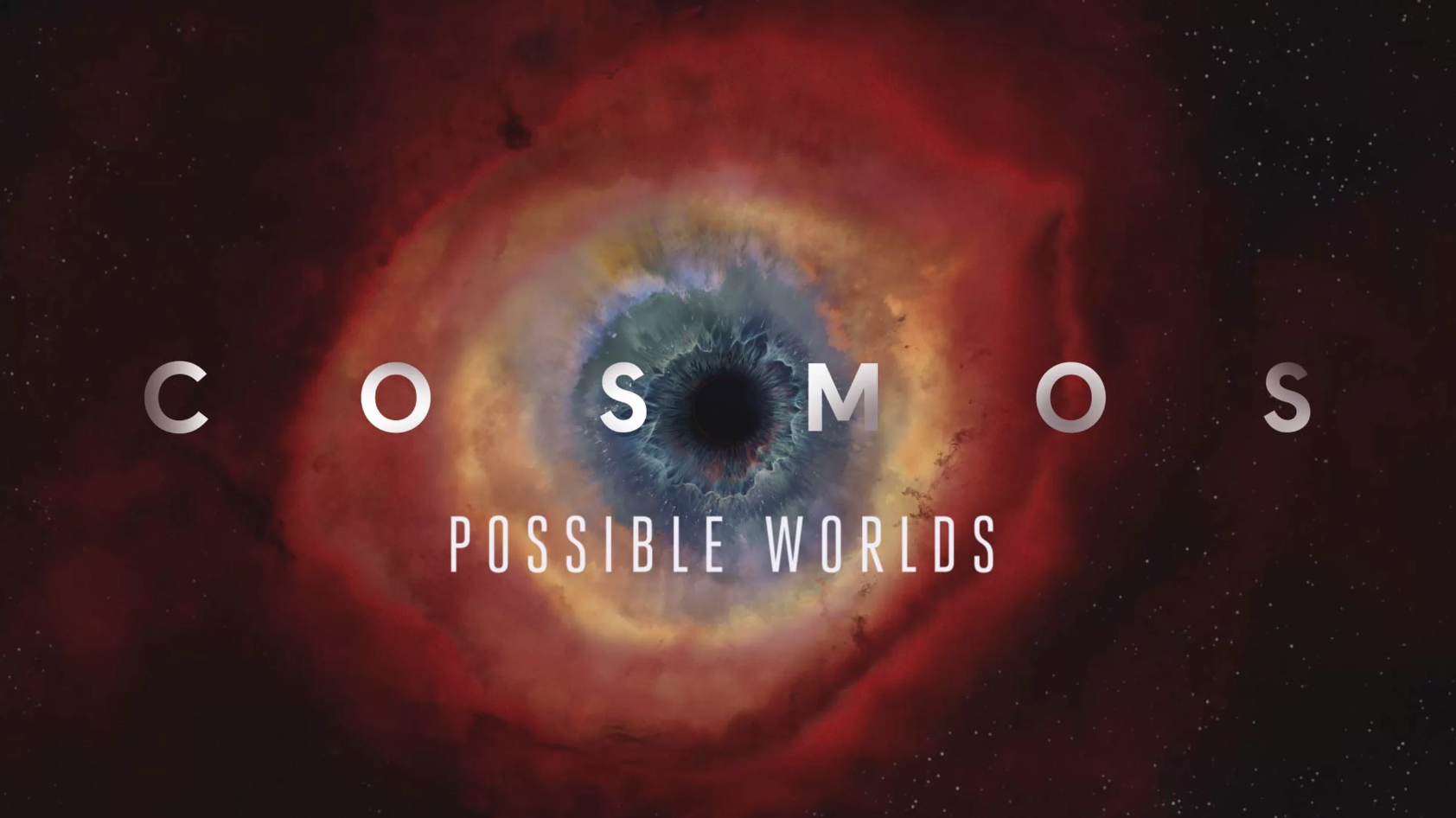 In a ground-floor warehouse-size room we visit sets for the series already built or being constructed, Paleolithic caves and ancient buildings of Persia and Egypt among them. They offer a sense of impending importance.

Then comes time to enter the soundstage area. I’m not quite prepared. All we can see at first, right in the middle, is a huge green curtain, three stories high, arranged in a circle. Just outside it, sitting in a director’s chair in front of dual video monitors is—well, it turns out to be Ann Druyan. She smiles, rises, and greets my wife, Ruth, and me with big hugs, warmly and generously. She’s smaller and slighter than I remember, but that may be only because today she has some laryngitis. Her voice is small, but her energy level seems high. We all first met in 1994 at a little gathering in Seattle that CSICOP founder Paul Kurtz arranged for Sagan and members of the CSICOP Executive Council to meet and talk over lunch. That was during CSICOP’s Seattle conference, at which Sagan gave the keynote address. It was his second and last for our organization.

In the years since Sagan’s untimely death in 1996, Druyan has written several times for the Skeptical Inquirer, including her wonderful personal cover article “Ann Druyan Talks About Science, Religion, Wonder, Awe … and Carl Sagan” (November/December 2003) and her passionate, moving epilogue (“The Great Turning Away”) to a July/August 2005 cover article printing the rediscovered transcript of Sagan’s answers to questions at that 1994 Seattle conference. In 2014 she answered our questions about the new Cosmos and appeared on our cover with Tyson (“Ann Druyan on the Wonder of Cosmos,” September/October 2014).

She is a longtime fellow of the Committee for Skeptical Inquiry (formerly CSICOP), as was, of course, Sagan—as also is Neil deGrasse Tyson, Cosmos’s on-camera host. Speaking of whom, to my surprise (I didn’t expect he’d be there), Druyan points out he is talking to some people just a few feet away from us. He’s between stints filming on the soundstage. She takes us over to greet him. He is the vintage Tyson, nattily dressed in dark suit and dark shirt (no vest or science tie like he often wears on TV). He comes over and gives us a friendly greeting and asks about SI. It turns out we have arrived at a short break in the filming of his on-camera narrations for episode 11.

Little of the filming is done in sequence. Portions of episode 11 may be filmed today, episode 9 the next, episode 3 the next. There is a detailed master plan for all this. There has to be, with a crew of two hundred busily working and a twelve-hour-day shooting schedule. “There are a lot of moving parts,” Druyan notes.

She has us sit in two vacant director chairs behind her and next to Cosmos science advisor Andre Bormanis, a congenial companion during our several hours there. We also meet the show’s director, Brannon Braga. He moves about a lot but sometimes sits in front of the second monitor next to Druyan.

Druyan turns back to us and expresses great worry about the state of science today in our current social and political milieu. With all the antiscience rhetoric and actions from political figures and other leaders, “It’s as bad as I’ve seen in my lifetime,” she says.

She hopes Cosmos can help correct that. She says her cocreators and crew relish taking part in something they find so crucially important. “I think they find it rewarding to be working on something meaningful in this desperate moment in our lives.” She emphasizes one of the series’ key points: “That truth matters.”

I ask if the script is completed. I’d heard that the 2014 season was being filmed while some of the script was still being written. “It’s all complete,” she says, with an air of pride and relief. “I learned my lesson.”

How might the 2019 Cosmos differ from the 2014 series? “It’s much more ambitious,” she says. “It is a much bigger production.” She adds, “I think it will be way more inspiring. I hope so.” She says she expects it to be “more emotional”—not the science, she quickly reassures us, but the human stories will be “more heart-based” with a strong emphasis on “a hopeful future.” She worries, as do I, that young people today lack inspiration and hope about the future, and she wants to restore those things.

Over the previous two years back home in Ithaca, New York, she wrote the script and with Braga hammered out the detailed plans for filming. Having devoted that much time to the process, the production is now expected to proceed without serious setbacks.

This time, I was excited to learn, there will also be a companion book, and she is its author. It is very much in progress. “I am getting up in the mornings at 4 am to write the book for three hours. Then I come here.” The book, she points out, has to stand on its own as a book with a cohesive voice: hers. It all sounds exhausting. It probably is but is probably exhilarating too.

Tyson gets the call, and up he goes onto the circular stage behind the green curtains. I take a quick peek in. The floor is divided into concentric rings that can be elevated to different levels. For these next shots, the center core has descended so that the camera can peer up at him from well below. Later I find it way up in the air.

This stage, with its vast green-screen curtains and later-applied CGI magic—which a video editor off to the side kindly demonstrated to me using the video-editing software on his computer—will be transformed into Cosmos’s “ship of the imagination” scenes.

Then come the commands “Quiet!” and “Action,” and Tyson begins delivering some of Druyan’s poetic passages in his own inimitable style and with that rich voice that we’ve come to know from his television and radio appearances, including the 2014 Cosmos. This passage seems to be about living some time in the future on Neptune’s moon Triton. He finishes. Then does a second take, then a third. Druyan is directing him, approving or sometimes asking for just a little different emphasis here or there. Then that part is done, and he returns to a chair off to our right.

Over the next few hours the whole process gets repeated multiple times, using different parts of the script.

From time to time he comes over to talk with us. This filming at Santa Fe Studios began two weeks earlier and will continue for five more weeks, he tells us. There’ll also be some on-location shoots in scenic parts of New Mexico, including on tribal lands. Before coming to New Mexico, they filmed at JPL, control center for so many epic spacecraft planetary explorations. After they’re done here, they’ll return to California briefly, then go to the Pacific Northwest, and then are off to Europe and Asia for an extended series of on-location visits. Then back to California for three months of post-production.

As we head to the exit, Druyan walks with us. In addition to her creative production people, she extolls another key person crucial to bringing the new Cosmos to fruition: the multitalented actor/entertainer/creator Seth MacFarlane (executive producer), who had the contacts at Fox and even helped with funding.

Cosmos: Possible Worlds will debut in the spring of 2019.

What’s it going to be like? I can’t say for sure. We saw only brief disconnected glimpses. But I trust the vision of Ann Druyan and all the other creative people she has surrounded herself with. More than likely I think you can expect that next year millions of us worldwide will be watching evocative stories of human discovery, past and present, some much-needed celebrations of science and reason, and an altogether new and inspiring glimpse of our cosmos.