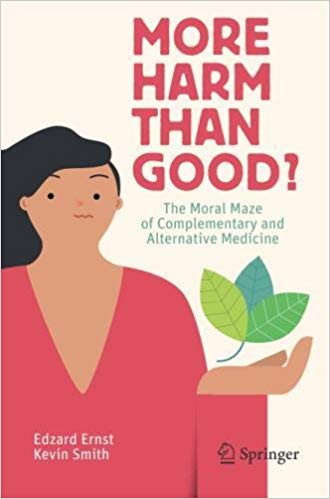 Edzard Ernst is arguably the world’s foremost expert on the claims and the evidence (or lack thereof) for Complementary and Alternative Medicine (CAM). Now he has teamed up with a medical ethicist, Kevin Smith, to coauthor a new book, More Harm Than Good? The Moral Maze of Complementary and Alternative Medicine. Much has been written on CAM, but this book takes a new approach. It asks if CAM is ethical and answers with a resounding “No.”

In all areas of health care, patients are entitled to expect certain basic precepts to be satisfied: “Practitioners should be competent. Treatments should be based on valid knowledge. Educational and licensing programs should ensure that only qualified practitioners can practice. Autonomy: patients should be free to choose or reject treatments based on full informed consent. Honesty. Absence of exploitation.”

“These basic ethical requirements are frequently neglected, ignored or willfully violated in CAM,” the authors say. They address these precepts one by one in great detail, showing how CAM fails to measure up. They support their argument with plentiful examples from the clinical practice of CAM practitioners.

There is an excellent chapter on research fundamentals (what good research should look like). It covers pitfalls in research, p-values, placebo controls, double blinding, systematic analyses, prior probability, and other crucial topics.

The following chapter covers the problems with much of CAM research, focusing on these issues: insufficient numbers of participants, lack of a control group, inappropriate control group, control group present but otherwise flawed, use of surrogate endpoints, misuse of statistics, “too good to be true” results, and fraudulent research.

The authors provide numerous examples of each and speculate about possible reasons for poor research design (perhaps the CAM researchers realize that a properly controlled study would show that their treatment doesn’t work). Any study with the design “A + B versus B” will guarantee a positive result, even if A is ineffective. Doing such studies is not only useless but unethical, because it fails to answer a meaningful question and wastes resources.

They explain why anecdotal evidence is woefully inadequate: “Indeed, findings that accrue from this approach are liable to grossly misinform clinical practice; in this way, anecdotal evidence can often be worse than no evidence at all.” Much of CAM research is no better than an assemblage of anecdotal cases.

They explain the attraction of CAM, with a quote from Peter Medawar: “If a person is A) poorly, B) receives treatment intended to make him better, and C) gets better, then no power of reasoning known to medical science can convince him that it may not have been the treatment that restored his health.”

They argue that certain unavoidable features of CAM education render it an almost intrinsically invalid enterprise. It often resembles a religious cult, and it expropriates and corrupts core concepts from mainstream medicine. Students who enroll are not provided with accurate and sufficient information and can’t really give informed consent for their education. Chiropractic schools that teach “subluxation” have to teach a corrupted version of evidence-based medicine, because there is no evidence that subluxation is a valid concept, and there is evidence that chiropractic manipulations can lead to serious injury. Naturopaths, chiropractors, and homeopaths are poorly educated about vaccination; this has an impact on public health.

Informed consent requires the patient to understand the indication for the treatment, the nature of the procedure, the potential benefits and risks, and other treatment options.

A patient with asthma who is treated with spinal manipulation by a chiropractor is not likely to have given informed consent, which would require informing them that there is no evidence that spinal manipulation, and thus chiropractors, have any effect on asthma, that delaying proper conventional treatment is dangerous, that there are risks to spinal manipulation, and that other (proven) treatment options are available. “The notion that CAM tackles the root causes of disease is a myth and an unethical distraction from the truth. … We cannot name a single alternative treatment for which there is compelling evidence proving that it can produce more than symptom-relief.”

Unreliable diagnostic techniques, such as iridology, can generate both false-positive and false-negative results; sometimes false results can cost lives. “In this way invalid diagnostic tests are akin to bogus bomb-detectors.”

Genuine informed consent is unattainable for most CAM modalities.

CAM practitioners may peddle untruths for reasons ranging from honest error to deliberate fraud; the consequences to the patient are the same. Falsehoods are always ethically unacceptable. Who should act to fulfill the duty of preventing falsehood-related harm? Individuals, agencies, and the government all share that responsibility.

When confronted with evidence that their CAM modality is not as effective or safe as they claim, CAM practitioners respond predictably, and Ernst and Smith predict these responses to their book:

To nip this in the bud, the authors have provided rebuttals to each of these arguments. And then they address the argument that even if CAM is only placebo, its use is justifiable.

Finally, they discuss the ways in which CAM exploits patients, including physical damage, mental distress, financial loss, and harm to third parties.

Ernst and Smith make a strong case that CAM is unethical and that it does more harm than good. Ethicists should be convinced. CAM practitioners and patients will not be, because their belief systems preclude an unbiased, rational scientific assessment. They will object as Ernst and Smith have predicted, but their objections have already been handily refuted. This book is well organized and well thought out. It was written to inform, not to entertain. It is not an easy or “fun” read, but it’s an important one.