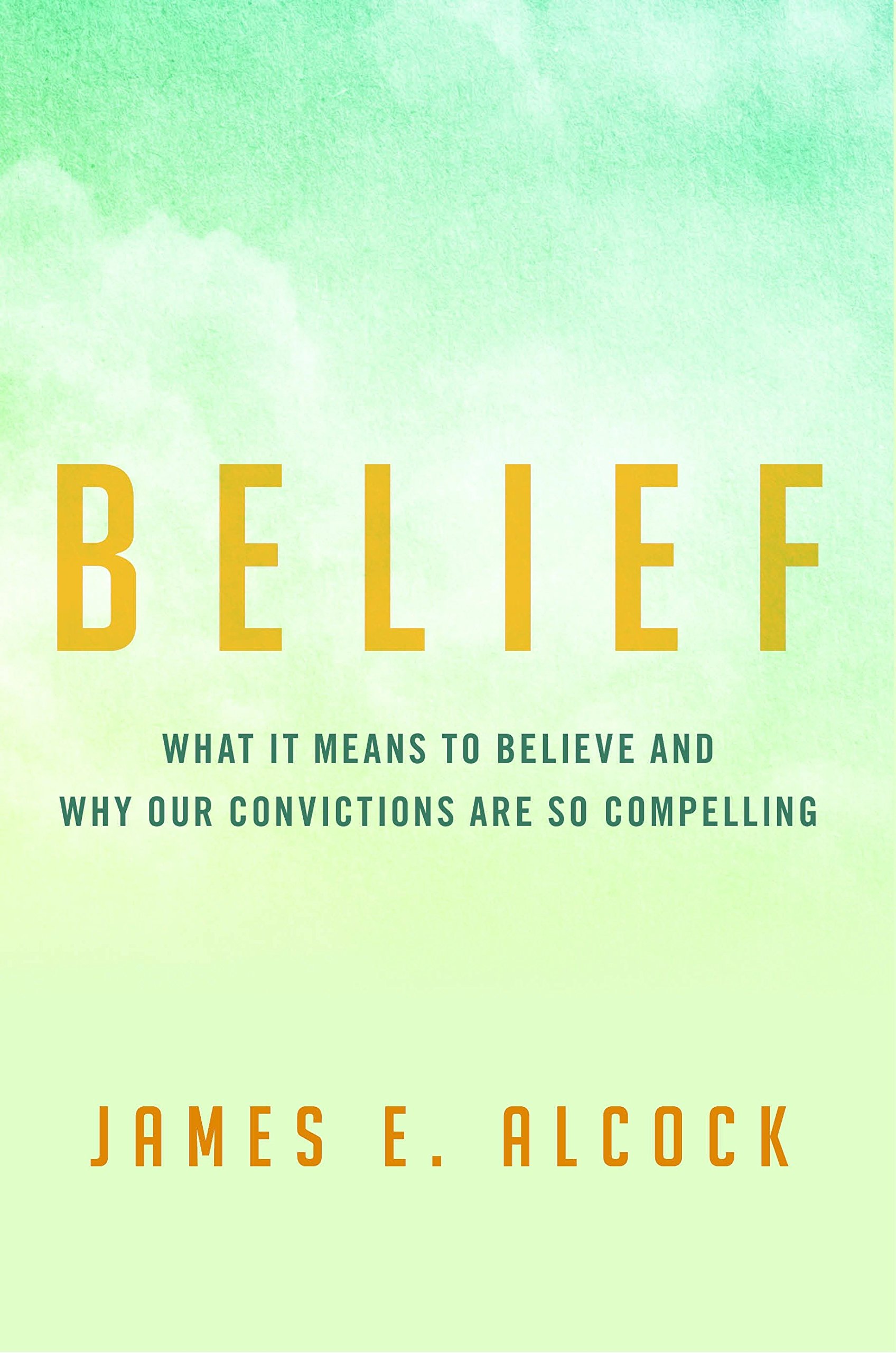 In James E. Alcock’s classic 1995 Skeptical Inquirer article “The Belief Engine,” he wrote, “Our brains and nervous systems constitute a belief-generating machine, a system that evolved to assure not truth, logic, and reason, but survival.”

Now he has expanded that thesis into a book, Belief: What It Means to Believe and Why Our Convictions Are So Compelling. It’s much more than a book about belief. In the foreword, Ray Hyman says it would be an ideal textbook for a course that provides an integrated overview of all the areas of psychology. He says every psychologist and psychology student should read it. It is an outstanding achievement of scholarship; its 638 pages include over seventy pages of references. It covers everything from the latest findings in neuroscience to a catalog of many of the questionable beliefs people hold and why they hold them.

Alcock is the ideal person to write such a book. He has a BSc in physics and a PhD in psychology and has been teaching psychology at York University since 1973. He is one of the founders of the Committee for Skeptical Inquiry (formerly CSICOP), a CSI fellow, and a member of its Executive Council. He has also won numerous awards for skepticism and psychology. He has written extensively on social psychology and the psychology of belief. He is a registered clinical psychologist with his own private practice and is also an amateur magician. He has stature in both senses of the word (if I remember correctly, he’s about six-foot-five).

The Power of Belief

Beliefs guide all our thoughts and behaviors, from brushing our teeth to voting for a particular political party. They have power over life and death: people have willingly died for their beliefs, and someone commits suicide terrorism every forty seconds. Alcock elucidates the various factors that contribute to suicide terrorism. And he tries to explain why some beliefs are so powerful that they are impervious to reason and evidence.

There is nothing fundamentally different about the nature of beliefs that we consider rational and those we deem irrational. We do not choose our beliefs; they are generated and maintained through automatic processes in our brains. Alcock explains what goes into those automatic processes: perceiving, remembering, learning, feeling, and thinking. And he shows how those processes can depart from reality.

The brain uses sensory input to construct schemas that may not represent the real world accurately. It fills in missing information. It creates visual illusions. Attention is selective: We think we are aware of everything in our environment, but we aren’t. We see things (pareidolia) and hear things (apparent words in random noise) that are not really there. We sometimes confuse mental imagery with external reality. So, we need to be cautious when basing a belief entirely on what our senses tell us.

Recent research has revealed how unreliable our memory is, even when we are most confident that we are remembering correctly. Memories are reconstructed each time we remember. Experiments have shown how easily false memories can be implanted and elaborated. Contaminating influences can distort our memories in various ways. Memories “recovered” under hypnosis are confabulations. Eyewitness testimony is notoriously unreliable; errors and bias in memory have led to false convictions and ruined lives. It’s clear that memories should not be treated as unshakable foundations for our beliefs.

Alcock explains how we learn through our own experience, through watching others, through what we are taught, and through what we read. Many beliefs are established in childhood: children soak up new information like a sponge. He covers classical conditioning, operant conditioning, reinforcement, superstitious conditioning, and the power of coincidence. He shows that we must trust others for most of our information and discusses how we decide whom to trust. He shows how beliefs influence emotions and emotions influence beliefs. Belief in magical remedies can reduce despair when scientific medicine can’t provide a cure. Learning from others means we must trust their accuracy, reliability, and honesty, which leaves us open to error and manipulation. We must use critical thinking skills to help us separate fact from fiction.

Alcock explains the two types of thinking: System 1 (experiential, intuitive) and System 2 (rational). System 1 thinking involves intuitions and rules of thumb that are a practical necessity for rapid response and the necessities of daily life. However, our intuitions are subject to many biases, including the availability heuristic, the simulation heuristic, the representativeness heuristic, the introspection illusion, and confirmation bias. He discusses hunches gone wild, the Gambler’s Fallacy, misunderstanding probability and statistics, the need to look at base rates to determine what is anomalous and what isn’t, and so on. System 2—rational processing—can be led astray by errors of logic, belief bias, abduction reasoning, and enthymematic reasoning (reasoning from an unstated premise). Logic doesn’t come naturally; it can be trumped by emotion and intuition and be sullied by various errors and biases. It’s important to remember that even rational thinking can be fallible.

Alcock also focuses on how beliefs are formed, how some beliefs resist change while others submit to contradictory information, and how beliefs motivate people to achieve difficult goals, even to the extent of dying for them. We all hold beliefs that are wrong but that seem just as reasonable as any other belief. We automatically believe new information; only later do we examine it for truth. True knowledge must be based on evidence, but we can’t personally verify many of our most important beliefs, so we must rely on the pronouncements of authorities.

Before people’s actions and allegiances change, their beliefs must change. Many beliefs are so entrenched that they resist powerful evidence against them. Alcock addresses collective delusions, conspiracy theories, and moral panics such as the one that led to false accusations of Satanic ritual abuse. He lists the factors that make beliefs unlikely to change, the ways people rationalize away new evidence, and how disconfirmation can actually strengthen beliefs. And he discusses how sometimes even the most extreme beliefs can change through conversion. He covers persuasion, Hitler’s cardinal rules for successful propaganda, gas-lighting, brainwashing, interrogation, fake news, alternative facts, and post-truth. He describes some of the suggestions in the psychological literature for getting people to change their beliefs.

The book discusses suggestibility, the Barnum Effect, cold readings, imposters, con artists, hoaxes, Ponzi schemes, Nigerian email scams, lie detection, and self-deception. He stresses that we can all be fooled. We are poor at detecting deceit in others and fail to recognize when we have fooled ourselves. Alcock explains how our beliefs about our bodies, our minds, and our well-being sometimes stray significantly from reality. He covers various illusions such as phantom limbs, the rubber hand illusion, body maps, the “ghost in the machine” belief, the mystery of consciousness, the workings of the unconscious, and ideomotor actions (dowsing, Ouija boards, etc.). Recent research has established that our actions are determined unconsciously before we are consciously aware that we have decided to act.

The brain can fool us with remarkable experiences that we can’t distinguish from external reality, often accompanied by strong emotions and lasting effects. Alcock covers transcendental experiences, hallucinations, out-of-body experiences, meditation, hypnosis, dreams, and sleep paralysis. There can be illness (subjective symptoms) without disease (pathophysiology). Beliefs about the state of our health may not reflect the actual state of health but can contribute to it. Is stress harmful? The belief that stress is bad for us can be deleterious to our health. Alcock examines possibly unreliable reports of people scared to death, dying after hexes or curses, the “broken heart” syndrome, etc. He discusses hysteria, mass hysteria, hypochondria, the worried well, and questionable mental diagnoses, including multiple chemical sensitivity and electromagnetic hypersensitivity.

Feeling better after a treatment doesn’t necessarily mean we actually are better. Suggestion is powerful, and healing rituals are persuasive. He covers Anton Mesmer’s “animal magnetism,” placebo effects, sham surgeries, learned responses, expectancy effects, conditioning, social learning, and theological placebos. He says there are three types of healing: natural (the body heals itself), technological (drugs, surgery), and interpersonal that depends on context and personal interactions and that leads to improvements in illness but not in disease.

Belief includes a long chapter on belief in remedies that either lack evidence of effectiveness or have been proven ineffective. He covers traditional Chinese medicine, qi gong, acupuncture, homeopathy, naturopathy, chiropractic, aromatherapy, therapeutic touch, Reiki, thought-field therapy, and cranial-sacral stimulation. He investigates the reasons people choose alternative medicine and reject science-based treatments and vaccines. He covers beliefs in psychology, including recovered memories, EMDR, Munchausen by proxy, and seasonal affective disorder. He concludes, “Let careful scientific research rather than hyperbole, gushing testimonials, or ‘ancient wisdom’ be the foundation for our beliefs about what is or is not effective.”

That would be a good motto for the Science-Based Medicine website.

We are born magical thinkers, and magical thinking is hard to overcome. Alcock delves into beliefs associated with magic, religion, superstition, and the paranormal, examining how they reflect our constructed representations of reality. He discusses stage magic, sympathetic magic, magical thinking, hyperactive agency detection, magical contagion, and the persistence of superstitions. In separate chapters, he covers the origins and psychological benefits and harms of religion, anomalous experiences and parapsychology, illusory experiences, and a caboodle of strange beliefs, from alien abductions to the Bermuda triangle, from electronic voice phenomena to reincarnation, from fire-walking to energy fields, from spontaneous human combustion to astrology.

Building a Firewall against Folly

In the final chapter, Alcock shows how we can all become better at critical thinking. He gives these eight rules:

Finally, he reminds us that critical thinking means we should be prepared to disagree with ourselves, which is never easy.

Belief: What It Means to Believe and Why Our Convictions Are So Compelling covers a huge variety of topics. It’s written in a style that is accessible and appealing to the lay audience yet rigorous enough to satisfy professionals. I think everyone would benefit from reading it. It is the equivalent of a psychology course and an owner’s manual for the brain; it explains how our minds work, how we come to believe the things we do, and why it is hard to change those beliefs. It explains our biases and errors and how critical thinking can help us distinguish true beliefs from false ones. It combines the latest scientific knowledge with the best incisive thinking. It provides insight into many of the problems facing our society. And it’s an entertaining encyclopedia of strange and false beliefs.

The book’s principles are illustrated by many fascinating examples and anecdotes. My favorite was the rectal piano. One of Alcock’s patients held the delusion that there was a small piano in his rectum, and he was obsessed with a desire to play it. He wanted to have his fingers surgically removed to eliminate the temptation! Alcock asked if he had considered having the piano removed; he thought that was a great idea and asked Alcock if he would do the surgery.

I can’t praise this book enough. You can borrow it from your public library for free or buy the Kindle edition for only $11.99. Read it! It will educate you and entertain you, and you will begin to question some of your beliefs that you might not have thought to question before. Our society would be a much better place if everyone would read this book and absorb its lessons.