I am always interested in seeing how countries and cultures honor their scientists, thinkers, and innovators. Today, entertainers and athletes get the bulk of popular acclaim. I don’t begrudge their fame—it is well deserved—but it is always nice to see when people who have advanced our understanding of the world in profound ways get their due. On a trip to Britain in August, I finally got to realize a lifelong dream and visit the home where Charles Darwin lived and worked the last forty years of his life (1842–1882), Down House. In a secluded rural area of Kent, southeast of London, it is where he researched and wrote On the Origin of Species. It is where he carried out studies

I am always interested in seeing how countries and cultures honor their scientists, thinkers, and innovators. Today, entertainers and athletes get the bulk of popular acclaim. I don’t begrudge their fame—it is well deserved—but it is always nice to see when people who have advanced our understanding of the world in profound ways get their due. On a trip to Britain in August, I finally got to realize a lifelong dream and visit the home where Charles Darwin lived and worked the last forty years of his life (1842–1882), Down House. In a secluded rural area of Kent, southeast of London, it is where he researched and wrote On the Origin of Species.

It is where he carried out studies and observations that led not only to his theory of evolution by natural selection (codiscovered independently by Alfred Russell Wallace) which he published in 1859 but to an amazing variety of other groundbreaking papers and books (he was the world’s expert on barnacles; he loved and studied worms; he measured plant movements; he was an astute geologist) that have made Darwin one of the preeminent scientific figures of all time.

Down House is not really on the tourist track. I’d hoped we could find a small bus or van tour out of London. As far as I could learn, such doesn’t exist. You need to get there on your own, though that is fairly easy. Take the train from London’s Charing Cross Station southeast for nine stops (about half an hour) to Orpington Station, then take a taxi 3.9 miles to Down House (or train from Victoria Station to Bromley, and then a slightly longer taxi ride). Once there, they are all set up for visitors. This is courtesy of the nonprofit group English Heritage and its capable staff and volunteers, who operate the house and property admirably. You can have a delightful day.

You are in Darwin’s study, a large, warm room filled with his own furniture and personal and scientific items. You can see his scientific instruments, specimen bottles, books, and writing board. It’s where he wrote his books and carried out his voluminous correspondence with scientific colleagues worldwide. You can visit his bedroom, the dining room, and the various family rooms. And what a family it was! Charles and Emma Wedgewood Darwin had ten children. Three died very young, but five boys and two girls survived and flourished there with them. In contrast to prevailing Victorian standards, both parents openly loved and respected their children, played with them, and encouraged them to play and express themselves. The house feels lived in. It must have been a warm and raucous place, one that nevertheless provided Darwin with the solitude and supportive setting he needed to think, study, and write. Emma oversaw the whole family operation and cared for Charles when he was ill.

And then there are the grounds. A huge grass backyard, bordered by trees and ornamented with flowers, beautifully frames the home. My wife and I sauntered out through it, enjoying the cool afternoon, and then eventually discovered—on our own, out beyond those grounds—Darwin’s greenhouse, innovative for its time. In three sections, it is filled with orchids and carnivorous plants, and it is where he observed and meticulously studied plant movements, plant behavior, growth patterns, reproductive behavior, and pollination (a tunnel passageway allows bees to fly in and out). The grounds go on and on. There are huge flower and vegetable gardens that again served Darwin’s biological studies. Off through a stone wall and archway to the right, there’s another yard where the children played and an early not-quite-yet rectangular tennis court. And off in another direction there’s his Sandwalk, “ominous and solitary” in his daughter Gwen’s description, where he strolled three times a day to think and develop his ideas.

The feeling is almost as though you are there at the time, observing the great observer at work and at play. If the five-year voyage of the Beagle was Darwin’s epic field trip (and it certainly was), Down House served as his own at-home laboratory for his subsequent systematic experiments and observations.

England has done an admirable job with Down House. Darwin’s legacy there is kept alive and well. And not just there; until just earlier this year, Darwin and his theory of evolution were colorfully depicted on the Bank of England’s E-Series £10 note. (Darwin is now replaced by the novelist Jane Austen.)

Likewise, when I visited London’s great Natural History Museum, in South Kensington, I was pleasantly surprised to see atop the steps at the far end of the vast building-long entrance hall a huge marble statue of a kindly Darwin, seated and looking genial, welcoming visitors. It was moved to this prime position in the museum’s central hall in 2008, in observance of the February 2009 bicentenary of Darwin’s birth. (That’s why I didn’t remember it from my previous visit to the museum years earlier.) I watched for a long time as family after family came up to it, touched it, and had their photos taken with Darwin. I’d like to think that the same thing could happen in my own country, the United States: a modern scientific powerhouse where nevertheless the antievolution movement (creationism) based on biblical literalism still has enormous political and social influence. I’d like to think so, but I can’t be sure.

Nearby is a statue of biologist Thomas H. Huxley, “Darwin’s bulldog,” who so effectively spoke out on behalf of Darwin’s then-novel theory. 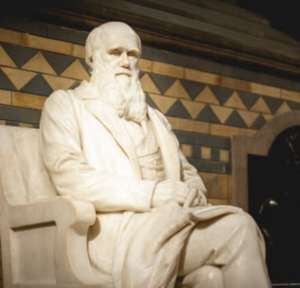 These kinds of tangible representations of great scientific figures may be imperfect in a strictly educational sense, but I find them important. They tell us what a civilization values. They tell us what it celebrates. Later, in Edinburgh, I visited the statue of the great Enlightenment philosopher David Hume. If scientific skeptics had patron saints, he would be one of them. It’s right there on High Street, the Royal Mile, on a busy sidewalk in the very center of Edinburgh. Tourists walk by and rub his toe. After posting on Facebook a photo of my wife and me visiting it, an SI reader brought to my attention a newly written essay praising Hume by the philosopher Julian Baggini, “Hume the Humane,” describing why Hume is “the amiable, modest, generous philosopher we need now.” It is a lively, enjoyable read, and I urge you to seek it out online and see why we all still value him so highly.

Last year in old Prague, I came across a wall plaque and a tiny museum honoring the early astronomers Tycho Brahe and Johann Kepler, who lived and worked there. In Budapest, a proud tour guide pointed out a plaque honoring the Hungarian-born pioneer nuclear physicists Edward Teller, Eugene Wigner, and Leo Szilard. On a walk a few years back to the old campus of the University of Copenhagen, I came across exactly what I hoped might be outside a classroom building: a statue of Niels Bohr, the physicist who explained the internal structure of the atom. On the Eiffel Tower in Paris, if you look closely at a crossbeam high in the air, you’ll find engraved the names of dozens of famous French scientists and engineers. In China, in 2007, Paul Kurtz and I visited the China Science and Technology Museum in Beijing, and I marveled at a two-hallway-long display depicting full-size images of every single member of the Chinese Academy of Sciences.

Early in my career I worked at the U.S. National Academy of Sciences in Washington, D.C. Sometime after I left (in April 1979 to be exact, the centennial of Einstein’s birth), the Academy erected on the southwest corner of their headquarters property at 21st Street and Constitution Avenue NW a monumental four-ton, twelve-foot-high bronze statue of Einstein in casual repose. In Einstein’s left hand are engraved three equations summarizing three of his key scientific advances—general relativity, the photoelectric effect, and energy-mass equivalence. When our first two grandchildren were young, we took them there, and they immediately scrambled high up onto the statue in childlike delight. We were embarrassed at the time, but thinking back on that moment now, I don’t think Einstein would have minded.

We need these reminders of great people who have shaped our view of nature and the world. We need to celebrate them, honor them, and treasure their insights and intellectual courage. We need that, for ourselves and for our own sense of the history of ideas and of accomplishment. It is a connection both to our past and to our future.


I am always interested in seeing how countries and cultures honor their scientists, thinkers, and innovators. Today, entertainers and athletes get the bulk of popular acclaim. I don’t begrudge their fame—it is well deserved—but it is always nice to see when people who have advanced our understanding of the world in profound ways get their …