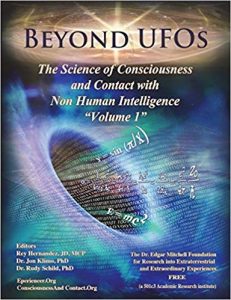 Beyond UFOs: The Science of Consciousness and Contact with Non-Human Intelligence, Volume I. Edited by Rey Hernandez, Jon Kilmo, and Rudy Schild. The Dr. Edgar Mitchell Foundation for Research into Extraterrestrial and Extraordinary Experiences. 2018. ISBN: 978-1721088652. 802 pp. Softcover, $29.95; Kindle, $19.95.

This book is touted as the first comprehensive worldwide scientific investigation of individuals who have reported contact experiences with nonhuman intelligences. It is widely promoted to a movement of “experiencers” who believe that their experiences are real. The authors include many qualified social scientists, including four retired academics with PhD degrees. They report the results of qualitative and quantitative surveys of 4,200 individuals in 110 countries conducted in four languages (English, Spanish, German, and Slovak). The book is long at 802 pages and often repetitive, but this has the great merit of allowing the writers to report the quantitative results in detail and include extensive excerpts from the qualitative interviews.

I was pleased to see that the study replicated the key finding of a much smaller survey I published in the Skeptical Inquirer in 1994, “Measuring the Prevalence of False Memories.” In that article, based on a small population survey, I reported that people who believed they had been contacted or abducted by UFOs were also likely to have experienced other kinds of unusual experiences, such as being visited by a dead relative, seeing a witch or a devil in their bedroom, or seeing a ghost. I interpreted this as false memory syndrome.

The authors of the current study also report that UFO “experiencers” report these kinds of unusual experiences. They find that these experiences are much more common than experiences with UFOs, and they are skeptical of the whole UFO narrative (thus the title Beyond UFOs). They differ with me and with most skeptics in believing that these experiences are probably real. They suspect they are real because so many experiencers experience similar things and because they report them with such certainty. They ask why we accept eyewitness testimony in courts of law but not in the case of these reports. And they encourage experiencers to turn to the parapsychology researchers for further evidence.

To their credit, the authors do not claim to have “proved” the reality of these experiences. They concede that they are unprovable with any known methods. They speculate that nonhuman intelligences must be using methods of communication that are beyond our understanding and express the hope that “perhaps the depth and detail, and quantity and even purposeful repetition, of similar descriptions contained in this qualitative study’s results will make a case that could only be made in this way that there truly is something substantive and very real going on about the experiences being reported here.”

The most interesting and valuable parts of this book are those that report on the qualitative interviews in detail, with a great many quotes from respondents. But there is nothing in them that suggests input from any extraterrestrial source. The messages of the nonhuman intelligences include commonplaces such as advocacy of “love, oneness and unity” and the assertion that “the human race of earth is overpopulated.” The experiencers report that “we have many lives but one existence” and that “I was surprised by the connection to Zen, Tao experience” and that “I now understand myself to be part of universal consciousness that is linked not only to every being in the universe but also to the entire universe itself.”

The messages are positive and life affirming, and the experiencers feel comforted and inspired by them. They are also entirely banal, recycling well-trod religious and philosophical ideas. One reports that “the only thing that happened to me spiritually was that I gained a higher appreciation for a universal God. If anything, my belief in a higher power was increased, not decreased. I am less afraid of death, I feel more comfortable being alone versus socializing.” The reported experience is very similar to religious conversion, and the experiencers believe their lives to have been enriched in much the same ways that other religious converts report.

The researchers also asked about scientific ideas communicated by the nonhuman intelligences. The reported scientific ideas were perhaps even more banal than the spiritual insights. Experiencers reported that “there is no such thing as time. It is not part of space, as in space/time, but is just a measure of motion relative to particle activity,” “the physical part of your body is a frozen consciousness,” “each dimension has 12 dimensions attached to it which makes 144 altogether,” and “as we evolve over the span of many lives our vibrational frequency increases and we gradually move up the ladder.” One experiencer was advised to “educate myself on superstring theory and Freudian psychology.”

One experiencer asked the nonhuman intelligence to “tell me something that I don’t already know, something totally new so I can verify that you are not me.” He or she reports that “the answer I received shook me to the core. The alleged ET communicated in a mocking tone: ‘If you believe in “universal consciousness,” as you claim you do, what difference does it make whether it is your consciousness or ours!’”

There is nothing in these reports to suggest that the contactees are experiencing anything other than their own thoughts. The scientific or philosophical ideas add nothing to those disciplines; the religious ideas may be of value if they are taken on faith like other religious thoughts.


Beyond UFOs: The Science of Consciousness and Contact with Non-Human Intelligence, Volume I. Edited by Rey Hernandez, Jon Kilmo, and Rudy Schild. The Dr. Edgar Mitchell Foundation for Research into Extraterrestrial and Extraordinary Experiences. 2018. ISBN: 978-1721088652. 802 pp. Softcover, $29.95; Kindle, $19.95. This book is touted as the first comprehensive worldwide scientific investigation of …