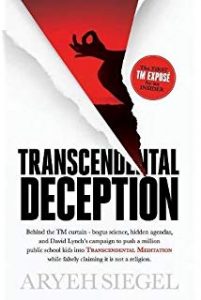 The subtitle indicates the content of this well-researched yet straightforward response to the quasi-religious sect founded after 1955 by Maharishi Mahesh Yogi (1918–2008). Mahesh first taught his religion as “transcendental deep meditation” in India. Later, this savvy businessman trademarked Transcendental Meditation (TM) for foreign consumption. A major meditation cult was born: Cultus means to care for; TMers care for themselves and the world through a special meditation technique.

Before I get into my review of the text, I want to relate an anecdote of my encounter with an average TM user in Santa Fe, New Mexico, decades ago. I was in the French Pastry Shop of the La Fonda Hotel reading an article critical of Transcendental Meditation. The headline caught the interest of a man in his thirties who sat at a table behind me. He was nicely attired in a sport coat without a tie. He told me that he was in town as a sales rep for a small business. Without any prompt from me, he launched into defending his TM practice that has helped him to become a success and kept him feeling well for eight years.

At that stage in my cult intervention career, I had helped hundreds of adults exit from a wide variety of controversial sects and self-help movements, including TM. I told him only that I thought the article was fair and well-researched and that I was an artist curious about new religions. His litany of arguments favoring TM were numbingly familiar to me: the “scientific” studies, the celebrities behind TM, “TM is not a religion,” and how anyone in any religion can practice TM. Predictably, his default dismissal of my critical stance was based on this common but spurious argument: You have not experienced TM, so how can you know what it is about?

My only pushback was to ask him whether he ever experienced yogic levitation or paid thousands of dollars to TM in India for a yagya ceremony. He appeared to not know about yagyas, but he gathered I knew more about the movement than he had “experienced.” He was never ritually initiated into (paid for and took) the yogic flying technique course; nevertheless, he tried to defend the weird hopping-in-a-lotus-position as scientifically plausible by pointing to a “brain wave coherence” study he read. We had been talking for over a half hour with me mainly listening. I stopped him, stating I had to go. We shook hands, I wished him well, and I left my cold, unfinished coffee behind with a tip. I wanted to finish the article somewhere else with my back to a wall.

It takes an enormous amount of patient, respectful, and educational exchange to open any true believer’s mind to new ways of looking at their experience and to assess overvalued beliefs—days of that in most cases. As my pastry shop neighbor poured out his apologetic promotions for TM, I imagined listening to someone from a Christian evangelical sect, from Scientology, from est or Landmark, from Eckankar, from Ramtha, or from any number of similar groups with seemingly “coherent” if totalistic worldviews. As I said, his arguments were numbingly familiar.

Aryeh Siegel did experience TM, first as an initiate in 1971, then as a teacher from 1975. He and his wife finally quit the movement in 1981, noting that four hours of meditation daily and expensive techniques were not getting them anywhere. He later ran a community mental health facility for several years and eventually became a real estate broker. He left that TM chapter of his life behind until 2015 when he noted with alarm that TM was again being promoted as a secular technique to public schools through the David Lynch Foundation. And that is the purpose of this book: To offer a concise history and factual assessment of a controversial religious practice that promotes itself as a proven well-being technique with no occult (hidden metaphysical) agendas. Transcendental Deception is a clear warning to go beyond propaganda and experience before you absorb the snake oil or give it to your kids.

After reading this book, it should become clear that TM is more than religion disguised as a science. The business model employed by TM’s founder relies on hijacking science to enhance a belief in occult powers. Religion’s chronic flaw has been the superstitious desire to manipulate reality through prayer, ritual, sympathetic magic, and casting spells. It is of interest here that one translation of mantra is to cast a spell. With the rigorous rise of the sciences in the past few hundred years, the occult arts have been discredited. Proto-astronomy, for example, divided into astrology and astronomy. Alchemy fell away from chemistry. Despite efforts by giants in science such as Isaac Newton and Robert Boyle (1627–1691) who both diligently tried to apply occult arts, including alchemy, the scientific method won out as our best means to improve health, locomotion, and our grasp of reality.

Siegel’s book reminded me that humanity’s deeply ingrained impulse to use mental and spiritual power to transcend and manipulate reality remains in every culture, including the post-industrial nations. New cults continue to appear with techniques for sorcery, magic, extrasensory perception, and communication with metaphysical beings. Nineteenth-century New Thought and Theosophy groups have proven that mankind’s desire for occult powers has not waned in the scientific era. “Science” has been co-opted by movements promoting occult or paranormal powers, including Christian Science, Scientology, Science of the Mind, and the Church of Divine Science. The Maharishi of TM knew what he was doing when he made more and more outrageous claims for the occult powers one can gain through TM: levitation without wings or machines, for example. At the very least, the average person paying a hefty fee for a special mantra harbors hope that the puja ceremony to Guru Dev and the Hindu gods will tap a real cosmic force to enhance the power of their TM practice. That is religion—not science.

To support his allegation that TM is a deceptive business, Siegel cites court cases, properly run studies on effects of meditation, and ex-member testimonies. Siegel mentions the fine documentary David Wants To Fly by German filmmaker David Sieveking (2010). I bought Sieveking’s film when it came out, but I had to order it from Europe at the time due to TM’s legal efforts to block distribution in Canada and the United States. Why would TM want to stop freedom of speech?  The film is an honest effort to document one young David Lynch fan’s effort to seek why TM has been so important to his hero’s filmmaking career. In his journey, Sieveking managed to interview Lynch, become initiated into TM practice (for a fee), then change course when his many questions were not being addressed by TM’s leaders. Sieveking turned to prominent ex-TMers to discover the hidden and not-so-hidden deceptions in the movement. He managed to expose the fraud behind the Vedic Cities where thousands of “pandits” were supposedly meditating to bring peace and harmony to the planet. The one in India, the Brahmasthan, was practically a ghost town with a few dozen meditators at the time. The proposed Vedic Cities would have 8,000 pandits (meditators) doing what amounts to a meditation mill to send good vibrations to the universe. TM meanwhile has been fundraising for $400 million to support these silly ventures. In 2014, India Today reported that Maharishi Vedic City in Iowa recruited 1,050 young Indians, over 150 of whom defected. These young men were promised high school educations and room and board for their planet-saving efforts—if indeed they comprehended what they were hired for. They were not high-level TM members with purported TM powers.

In Siegel’s book we learn that TM has relied partially on multimillion-dollar grants from the U.S. National Institutes of Health to fund services to schools and prisons to study TM. The NIH agencies gave TM nearly $23 million from 1992 through 2016, then the awards stopped. Siegel offers evidence that the NIH finally discovered or admitted that TM is nothing special with all the new studies about many forms of mindfulness and meditation that are equally effective yet offered for low fees or are free. TM’s latest effort at proselytizing through many high-profile celebrities supporting the David Lynch Foundation may be an effort to rescue a failing and deceptive business model. Furthermore, studies have shown that all forms of meditation may be over-hyped as to effectiveness for lowering blood pressure and bringing about inner harmony. The one-size-fits-all offerings of most yogic and meditation styles may be too good to be true.

Another anecdote here regarding David Lynch: In 2014, Lynch had a showing of art at the Pennsylvania Academy of Fine Arts (PAFA) in Philadelphia. David Lynch: The Unified Field was Lynch’s first major art show in the United States (see https://www.pafa.org/davidlynch). Lynch graduated from PAFA two years before I began attending in the early 1970s. As alumni, my colleague Brian O’Neill and I attended the show with hopes of hearing Lynch lecture, but his lecture was sold out. By coincidence, we were behind the lecture hall when Lynch appeared alone outside the back door smoking a cigarette. Brian, a photographer, walked up to him and requested a photo and brief interview, to which Lynch complied after he put out his cigarette. The scene made me wonder: What’s with the nicotine? A major promoter of TM does not have the means or desire to kick a bad habit.

On page 144, Siegel states the “goal of this book” is to “empower concerned citizens, particularly parents, to confront and expose TM’s deceptions and secrets … . The welfare of children is what matters.” As TM exposés go—I have several in my collection—Siegel’s book functions very well. It offers a solid survey of what TM is all about for people new to the sect as well as a great reference for anyone familiar with TM. If any school director has questions about David Lynch’s foundation to promote TM in public schools, give them this book immediately. We owe it to the children.

This review was written for the International Journal of Cultic Studies (Vol. 10, 2019) and is reprinted here by permission.


Transcendental Deception: Behind the TM Curtain—Bogus Science, Hidden Agendas, and David Lynch’s Campaign to Push a Million Public School Kids into Transcendental Meditation While Falsely Claiming It Is Not a Religion. By Aryeh Siegel. Los Angeles, CA: Janreg Press. 2018.ISBN 978-0-9996615-0-5. 222 pp. Paperback, $17.99. The subtitle indicates the content of this well-researched yet straightforward …