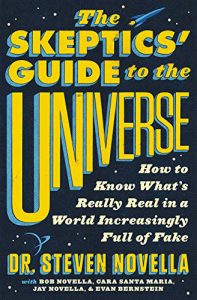 — The Skeptics’ Guide to the Universe

The Skeptics’ Guide to the Universe, the first book written by the hosts of the venerable skeptical podcast of the same name (abbreviated as SGU), is organized into five sections. The first is “Core Concepts Every Skeptic Should Know,” which begins with a discussion of the meaning of scientific skepticism itself. This introduction will be especially helpful to readers unfamiliar with this concept. “Core Concepts” is a large topic, covering almost half the book, and thus it is divided into subsections that each have a number of chapters. The subsections are:

The next section is “Adventures in Skepticism,” which includes six personal accounts regarding skepticism. Unlike the rest of the book, each of these chapters—one each from the five current podcast cohosts plus one from Perry DeAngelis, an original SGU founder and cohost who died in 2007—is written in a voice other than Steve Novella’s. My favorite chapter was Jay Novella’s, where you will learn why Perry voted to remove him from the podcast.

Section three covers “Skepticism and the Media,” which has chapters on topics including false balance, fake news, and the problems with bad science journalism. Section four is “Death by Pseudoscience,” which reveals some worst-case scenarios resulting from science ignorance or denialism. Topics include naturopathy and exorcism. Many disturbing cases are provided. The final section, “Changing Yourself and the World,” provides a nice summary of Steve’s philosophy on skepticism and includes his suggestions regarding applying skepticism in your life.

Each of the book’s five sections begins with an introduction preceding the first chapter. Don’t skip over the first section! The details of the “great airship hoax” from the turn of the twentieth century (where numerous airplane sightings were reported prior to the first flight of such a thing, just due to public anticipation of flying machines being created) was something I had not heard of before. This tale will be helpful in future arguments with my alien spacecraft–believing friends.

Many chapters begin with a short description of the subject, followed by a very pertinent quote. It’s sort of like the quote-of-the-week at the end of every SGU podcast, but these quotes apply more directly to that chapter’s specific content. The sporadic use of segment names from the podcast will resonate with SGU fans. The book is well referenced and has an extensive index, making it easy to find any detail one may wish to locate. This book is massive. Due to time constraints, I listened to the audiobook version during my daily commute. For the two weeks it took me to finish, I couldn’t wait to get back in the car to pick up where I left off. I am definitely looking forward to seeing (or hearing) what the SGU rogues come up with next.