CSICon is always a big deal. We wouldn’t crow about it so much if it wasn’t. We call it things such as “the premier skeptics’ event” and whatnot because it happens to be true! So even given the cascade of well-earned superlatives we (okay, I) use to describe CSICon year after year, it’s already obvious that this year’s conference was something else.

All these people, from remote locations across the country and around the globe, gathering to celebrate science and reason … and utterly immersing themselves in more. This is a good sign for the future. Nothing but blue skies from here, right?

Well, look, being realists, there was no way to open a conference such as this without acknowledging that those skies aren’t as blue as we’d like.

Robyn Blumner, CFI’s president and CEO, said that science and skepticism seem to have been “reduced to flotsam and jetsam” in public discourse. But at the same time, it remains that “reason is the most powerful tool for human progress on Earth.” Right now, these truths coexist, so all the more reason to be glad for the people we have working on the side of science and reason. (Blumner made a point of thanking CSI Executive Director and conference organizer Barry Karr and the CFI staff, referring to us as “the best team under the climate-change–enhanced sun.”)

You see, this is one of the cool things about being a skeptic: one can openly acknowledge unpleasant realities while also choosing to find hope and joy in the positive truths. Those are just as real. So the theme underlying the opening of CSICon 2018? Wow, there’s a lot of hard work to do. Good thing there’s us. 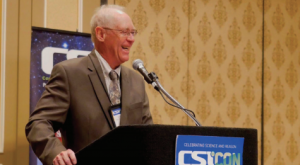 Also acknowledging our challenges, Skeptical Inquirer Editor Kendrick Frazier spoke of the adaptability and universality of skepticism, casting skepticism as a way to empower people who might otherwise be disempowered by pseudoscience and misinformation. Rattling off a long list of subjects that the magazine has covered just over the past year, Frazier illustrated how skepticism is applicable, and badly needed, in every realm of thought, in every subject. “You can’t fit what we do into a neat box—or any box!” Even if you could, why limit skepticism’s power? 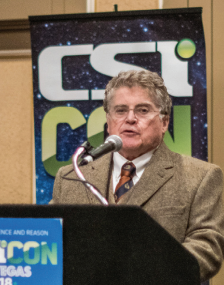 And that power, the power to think critically and use the tools of science and reason, are open to everyone. And it’s for everyone.

Eddie Tabash, CFI’s board chair, made that point about the wider freethought movement, the community that encompasses skepticism, humanism, and secularism. The work we were doing wasn’t just for us, not just to be “right,” but to make sure that the rights and freedoms we seek are enjoyed by everyone equally, whether or not they think like we do. Just so, a person doesn’t have to be a “skeptic” or jazzed about critical thinking for our movement to want to keep that person from being harmed by pseudoscience, conspiracy theories, and misinformation.