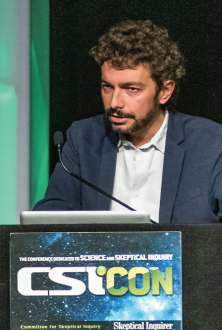 Massimo Polidoro described a certain someone as “a precious jewel” of a person, whose company and insights were sought by the wisest of leaders. This person “swam upstream,” eschewing fads and seeking to discover the truths and communicate those truths to others. This incredible human being exemplifies the term Renaissance person.

Polidoro was talking about Leonardo da Vinci (about whom he is writing a biography), but he could easily have been talking about two of the speakers in the Saturday afternoon presentations at CSICon 2018.

First there is the educational powerhouse Bertha Vasquez, whose secret identity is that of a mild-mannered middle school science teacher but whose superhero persona is that of the director of CFI’s Teacher Institute for Evolutionary Science (TIES).

According to Polidoro, Leonardo was among those figures of science who, like the best artists, were rebels. Just as Galileo confronted the dogma of a geocentric universe and Darwin upended any notion of humans as spontaneously created, so Vasquez fights in the most perilous of trenches for the integrity of science and the education of young Americans.

Indeed, Vasquez has raised TIES up to become a powerful and prolific force for good, having put on over 100 workshops for middle school science teachers in forty-two states over just three years of existence.

Vasquez will tell you that the content is what matters, that it’s the material and information provided in these workshops that prepares teachers to navigate the teaching and defense of evolution in the most culturally resistant areas (“I have kids who turn their chairs to the walls when I teach evolution,” she said to much shock), but watching her on stage at CSICon, it’s clear that TIES also owes much of its success to the force of her presence and personality.

Her enthusiasm for her subject is utterly contagious. Her drive to learn, discover, and share her knowledge is undeniable. She’s a true Renaissance woman.

Another figure Polidoro might have been speaking of when he talked about the reverence Leonardo inspired in his contemporaries is the “national treasure” of England, as Richard Dawkins called him, Stephen Fry. An internationally beloved actor, novelist, essayist, and even pioneering podcaster, Fry sat in conversation with Dawkins, lightly moderated by CFI’s Nick Little, whom Eddie Tabash referred to as our “super-lawyer.”

Prompted by Dawkins, Fry discussed the various ways different cultures throughout history have dealt with things such as myth and progress. (Fry’s latest book is Mythos, a retelling of the Greek myths.) Holding the ancient Greeks as a kind of ideal, Fry noted how they seemed not to take their “religion” literally and valued a ceaseless cultivation of new ideas. When religion is treated as more allegorical, Fry said, the assignation of personality and will to forces beyond human comprehension “is as much art and literature as it is religion.”

For the Greeks in particular, Fry heralded a mode of thinking wherein gods and the heavens were ideals to strive for, not a literal description of reality. Fry mused on the value of ritual and how the “brand power” of things such as religious institutions or the British monarchy can serve as symbols before which even those in power must humble and justify themselves.

Like Leonardo, Fry is certainly a Renaissance man. “Skepticism really means alertness,” he told the CSICon audience, advising us, “Be alive to an idea. An idea is a living thing.”

Fry recalled the words of Oscar Wilde (whom Fry has played to great acclaim on film), who spoke of “the ability to play gracefully with ideas.” This is an ability he shares with Bertha Vasquez, who has the grace to inspire young minds and shepherd evolution education through the roughest terrain.

To play gracefully with ideas is something to strive for indeed. As Polidoro said of Leonardo, so we hope it may be said of so many of us: “He was a man who woke up very early, when everyone else around him was still asleep.”