This year marks the 500th anniversary of the death of Leonardo da Vinci, the “universal genius,” and since I have been working a lot on him (two of my books in Italian on Leonardo just came out, and I am lecturing everywhere about him), I thought I would share with my readers some glimpses into the mind of this extraordinary man. 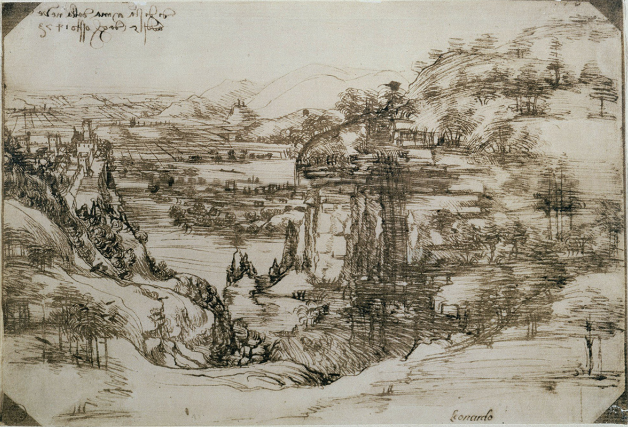 Look at the drawing reproduced on this page. It is considered the oldest surviving drawing by Leonardo da Vinci. It was drawn in 1473 and depicts a Tuscan landscape, maybe near Vinci, the small town close to Florence where Leonardo was born. This drawing is considered the first “pure” landscape in Western art: a landscape that is drawn not to be the background of some religious scene or a portrait. It is the first time (at least the first documented occasion) where a landscape was drawn just for the sake of it.

You can see that it was drawn quickly but with a precise hand: there are hills, trees, some castles in the distance, and water. Water especially is something that fascinated Leonardo for all of his life, and it’s already here, in his first drawing. But what is also interesting is the writing on the back of the drawing. In Leonardo’s backward handwriting it says: “I, staying with Anthony, am happy.” (Anthony was probably the husband of Leonardo’s mother.) It was, in fact, his grandparents who raised him, even though his parents were both alive; this fact is a key to understanding his upbringing and his very original way of thinking.

A Masterpiece of Nature

You see? We have barely started, and Leonardo’s extraordinary story has already taken us!

And Leonardo da Vinci is truly an extraordinary figure. His name is enough to immediately evoke a kaleidoscope of images that have become icons of our times: The Mona Lisa, the Vitruvian Man, the Last Supper, the Lady with an Ermine, etc. And then there are his anatomical studies, his inventions, the parachute, the submarine, the wings to fly, etc.

When he was still alive, he was already considered not only a genius but a masterpiece of nature. Every contemporary biographer described him as a beautiful man in appearance, engaging, elegant, with a fascinating ability to enchant and entertain his audience. They could listen for hours to his reasoning and his stories, and he was also a great musician: he could play the lyre and compose and sing improvised verses on the spot—a reason every powerful man wanted him at his side.

Raphael, who was younger and greatly admired him, put Leonardo at the center of his School of Athens, the famous fresco in the pope’s apartment at the Vatican, and he drew him as Plato, the greatest of all philosophers. Because Leonardo did not limit himself to just brilliant painting but also studied nature—from the human body to the stars—many critiqued him for wasting his time.

The King of France, Francis I, wanted Leonardo all for himself in the last years of the artist’s life, even though he had stopped painting. Francis wanted him near just to have the opportunity of conversing with what he considered to be the greatest mind that ever lived.

According to legend, Francis was holding Leonardo when he died, for there could be no other possible death for such a man than to breathe his last in the embrace of the king himself.

The legends started right after Leonardo’s death, when he was quickly transformed into a real-life godlike figure. Giorgio Vasari, who was not a great painter but notable for being the first art historian, was only eight years old when Leonardo died, but he had the chance to meet many who knew Leonardo. In his book on the lives of the great artists, Vasari describes Leonardo almost as a supernatural being:

The greatest gifts are often seen, in the course of nature, rained by celestial influences on human creatures; and sometimes, in supernatural fashion, beauty, grace, and talent are united beyond measure in one single person, in a manner that to whatever such an one turns his attention, his every action is so divine, that, surpassing all other men, it makes itself clearly known as a thing bestowed by God (as it is), and not acquired by human art. This was seen by all mankind in Leonardo da Vinci.

For Vasari and many others after him, if Leonardo had so many talents it was thanks to the “celestial influences,” because God himself chose him and favored him. Later, in the nineteenth century, there would be others seriously claiming that Leonardo had signed a pact with the devil.

But for those who do not believe in supernatural intervention, the fundamental question remains: How could Leonardo become an immortal figure, still recognized today, 500 years after his death, as the symbol of universal genius? What was his way of thinking that made him so original? 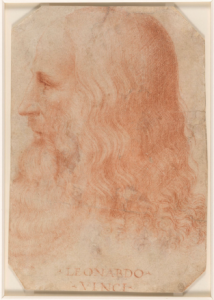 A defining trait was Leonardo’s tendency to swim upstream. He was an illegitimate son; his father, a notary public in Florence, had him after a short romance with a girl from Vinci named Caterina. He did not marry her, since he was already promised to a girl from a wealthy family in Florence.

Leonardo was raised by his grandparents and had no formal academic education, for illegitimate sons could not follow a regular course of studies and could not be admitted in the notary public’s guild. He was always described as very elegant, but he did not follow fads. He was left-handed, a homosexual, and probably a vegetarian—perhaps the first vegetarian recorded in Western history.

Leonardo really seems to be the portrait of everything that is opposite to what was considered to be proper behavior in his times (and probably today there still are some who would greatly disapprove of him). But it is this characteristic—the fact that he did not go with the flow and was quite secure in his choices—that made him unique. And, as we shall see in the next issue, even before science became what we know it to be today, he was already a scientist.


This year marks the 500th anniversary of the death of Leonardo da Vinci, the “universal genius,” and since I have been working a lot on him (two of my books in Italian on Leonardo just came out, and I am lecturing everywhere about him), I thought I would share with my readers some glimpses into …