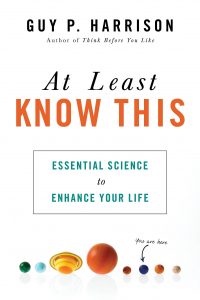 Journalist Guy P. Harrison has been adjacent to the skeptical community for a while now, writing books on religion and more popular treatments of typical skeptical topics, such as 2013’s Think: Why You Should Question Everything. You won’t see him at a lot of conventions, but maybe that’s a good thing, as he’s out fighting the good fight beyond the echo chamber.

So it makes sense that Harrison would attempt a book such as At Least Know This: Essential Science to Enhance Your Life, which aims to summarize and simplify much of what we know about the origins of our universe and ourselves. Whether intentional or not, At Least Know This feels a bit like an attempt at a twenty-first century version of Cosmos—which is a tall order indeed.

Harrison brings his synthesis skills (and contacts) as a journalist, as well as his degrees in history and anthropology, to the task. This is evident in large sections discussing racism and agriculture, both of which he’s against. Well, that’s not entirely true; Harrison understands that without agriculture and the settling down it enabled, we wouldn’t have modern society and the scientific advances that sprang from it. He just wants to remind everyone, rightly, that it comes with certain costs.

But racism? That one’s too far afield for Harrison. Given his education, he’s aware of the current status of scientific research on the squishiness of race. There may not in fact be biologic races, and if there are, they’re more sensibly divided by invisible genetic markers, not on superficial phenotypic traits such as skin color. Dividing them that way can wrongly lump everyone of African ancestry together, even though many Africans are more closely related to other “races” than they are to the more genetically distinct east Africans.

What troubles Harrison is how the public is unable to see or accept this (probable) truth. It’s plain to him (and to anyone who’s looked into the matter and values the rigor of the scientific method), but as skeptics we sadly know that much of the population just doesn’t think that way. Facts don’t change people’s minds, so to expect them to instantly choose inscrutable, jargon-filled evidence while abandoning what they see with their eyes is a path to disappointment. Getting the message through probably isn’t impossible, but it shouldn’t surprise anyone that it’s exceedingly difficult.

Harrison is clearly more sure-footed on some topics than others, but the vast majority of the book is meticulously well-researched and referenced, with a staggering fifty-two pages of notes and citations. At Least Know This genuinely does cover a breadth of topics and information spanning all of time and space, from the beginning of the universe to the formation of the solar system and the genesis of life, a Herculean organizational effort that does indeed give a lay public primer on the most often asked questions of existence. This is where the book excels.

For that reason, though, it may not be the best read for audiences already steeped in science and skepticism. By and large, those folks will likely find At Least Know This to be an elementary review, but, as noted, Harrison’s trying to reach others, not us. Even then, there are some previously uncovered gems that skeptics can use when engaging those with misguided beliefs, such as the idea that memory is grossly fallible because it’s not evolved to be a recording but an advisor of what to do in the future. The fidelity is only as high as it needs to be, and that’s a low bar.

For the uninitiated, the book is a fine distillation of what a person should know to be a world citizen, but Harrison doesn’t make the best case as to why that’s important in the first place, beyond the obviously needed preparation for potential doomsday scenarios. The reasons for understanding our history are less clear. He suggests “all thoughtful, modern people would want to contemplate” how today’s humans evolved but stops short of explaining the practical value. If it’s expected prejudice would evaporate with better understanding, that is not stated, nor is it realistic.

And for a book meant to induce awe, At Least Know This could use more illustrations or at least some better formatting. The photos included aren’t very instructive, and there are several boxed, narrative “asides” that interrupt the main flow. These things are likely victims of originating from a small publisher, but for a work with such a grand intent, they have to be noted.

At Least Know This: Essential Science to Enhance Your Life is not the next Cosmos, but it doesn’t have to be. It’s still a book you can hand to someone with little scientific knowledge to get them up to speed on just about everything. That’s no small feat. Exactly how we obtained this information isn’t always clear, which may put a bur under the saddles of science purists who prioritize methodology over trivia, but, hey, one step at a time. Bring the wonder, and maybe the rigor will follow.