Editor’s Note: This is the first of an occasional series of articles on the “Creationist Funhouse.”

Look into the night sky. Unless it is obscured by light pollution or clouds, you cannot help but be moved when you see the magnificence of the universe. A humanist would be in awe that we stardust humans are part of this vast wholeness and that we are privileged to understand even a little bit of it. An adherent of a monotheistic religion would say the words attributed to King David, “The heavens are telling the glory of God.”

But, according to young-earth creationists, both the humanist and the religious person would be very, very wrong. The reason is this: observations and measurements of the universe show that it is very old. Creationists believe, however, that God has warped the very young universe so that it just looks old. That is, what you see in a telescope and what an astronomer measures is a deception that God has created to trick us. The heavens and the earth do not declare the glory of God; according to creationists, they declare a lie. And the same is true of every other aspect of the natural world. From the chromosomes to the continents, God has manipulated the creation to look not only old but to look like it evolved. To creationists, there is practically nothing that you can observe in the heavens or the earth that you can believe at face value. It is all God’s intricate and magnificent fraud. 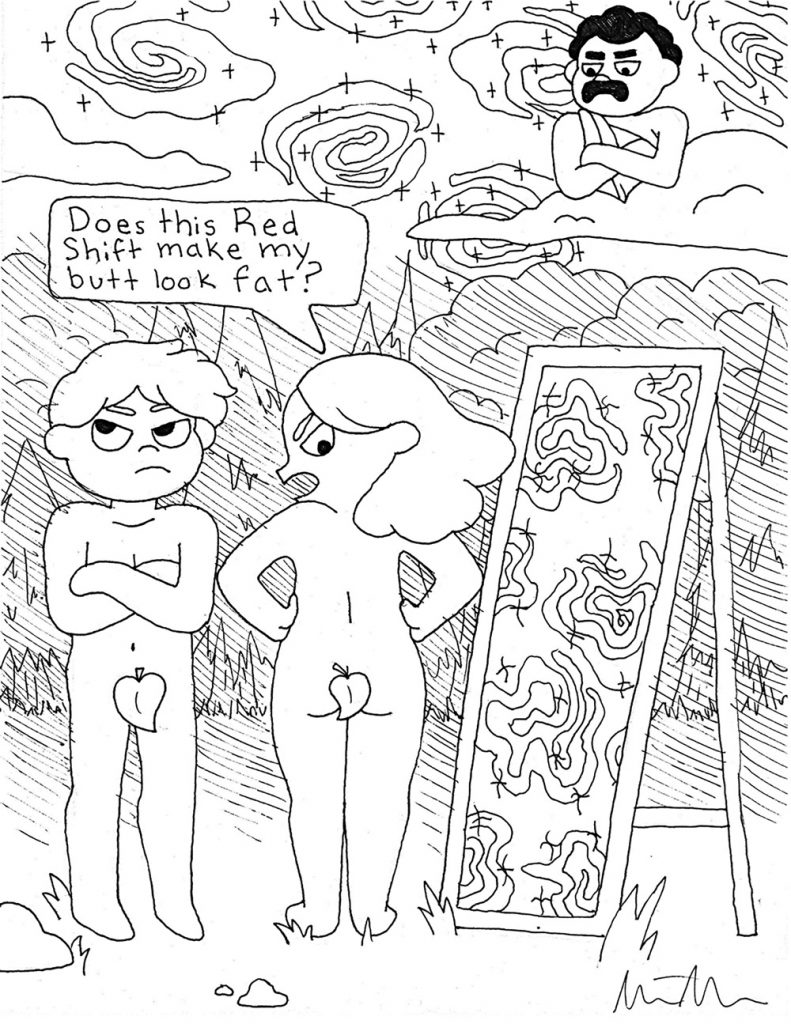 It gets worse. Most people assume that creationism is 200-proof Christianity. But it is not. The trickery that they claim God has done is not mentioned in the Bible. None of it. The creationists just made it all up. They wave their Bibles in the air, but their beliefs are based on their own vivid and warped imaginations. They believe that you cannot understand the universe just by studying it or just by reading the Bible. You have to let them take you by the hand and lead you through the funhouse of tricks that God has played on us, a funhouse of warped mirrors and of balls rolling uphill. They consider themselves inerrant guides through this funhouse. Whenever they say that God made the universe look old and evolved, they obligate God to have done whatever they say he did. It puts God in the subservient position. It seems to go something like this: a creationist says God did something, then God causes this thing to have happened in the past. I feel as if I am inventing new verb tenses to try to get my mind around it.

The purpose of this series of articles is not to beat up on creationists. I used to be a creationist myself, and I have written my share of articles and encyclopedia entries that throw creationists on the carpet. But readers of this magazine already know that creationists are wrong. Nobody, not even me, wants to read a tedious article whose conclusion is, “Therefore, creationists are wrong.” Instead what I want to do by picking apart creationism is to invite you to explore a lot of fascinating things about the cosmos and have fun along the way.

The idea of God making a young universe look old is not new. In 1857, a writer named Philip Henry Gosse invented the omphalos theory of creation. Omphalos is the Greek word for navel. His reasoning was this: When God created Adam, he gave Adam a belly button, even though Adam did not have a mother. If God could do this for Adam, then God could do it for the whole cosmos. The fact that the Bible does not say whether or not Adam had a belly button did not slow Gosse down from creating an entire creationist mythology based on this idea.

But with each passing year the omphalos theory gets harder and harder to believe. In Gosse’s day, all that God had to do was create some fake fossils in the sedimentary rocks and a vestigial organ or two, such as your appendix, to make the world look old. But today the evidence for an old, evolved universe has grown to prodigious proportions, which suggests that God did almost as much work spoiling his creation as he did in making it.

The immense age of the universe, and the answer to the mystery of its origin, came as a big surprise even to most scientists when astronomer Edwin Hubble and his collaborator Henrietta Swan Leavitt discovered them.

First, Hubble and Leavitt could tell how far away the galaxies were from Earth because, within our galaxy, stars known as Cepheid variables all have the same light intensity. Hubble found Cepheid variables in other galaxies and measured their light intensities. Light intensity decreases with the square of the distance. Hubble and Leavitt found that some galaxies were so far away that their distance can only be expressed in light-years, the distance light travels in a year. The universe turned out to be larger and older than most scientists previously dared to believe.

Second, if an object emits waves, then those waves are scrunched together (shorter wavelength) if the object approaches you and pulled apart (longer wavelength) if the object is moving away from you. This is known as the “Doppler effect.” Most of us know about the Doppler effect because of its effect on sound waves. The whistle of a train or the horn of a car has a higher pitch when it approaches us and a lower pitch when it moves away. Meteorologists use the Doppler effect to determine the direction of winds. A radar source emits a beam of microwave photons, which reflects off the clouds. When meteorologists measure the returning microwaves, the change in their frequency indicates whether the clouds are moving forward or away and how rapidly.

Light also travels in waves. Therefore, an object that is moving toward us will emit light that has shorter wavelengths (a blue shift) and an object that is moving away from us will emit light that has longer wavelengths (a red shift). Visible light has very short wavelengths, and we would never notice a red or blue shift on the headlights of trains or cars. But over universal distances, the red or blue shifts are measurable. Hubble and Leavitt detected red shifts in the light coming from all of the distant galaxies but not consistently in the stars of our own galaxy. This could only mean one thing: that the galaxies are moving apart, while the stars within each galaxy travel together. This is the famous red shift you have heard about.

So, what’s the problem? A creationist could, we might think, simply say that God created the big bang. And some of them do. But they are at the liberal end of the creationist spectrum. They risk denunciation from other creationists and from fundamentalist pulpits, because the very same evidence that shows that the big bang happened shows that it happened billions of years ago. As a church sign near my place of work proclaimed, “Big Bang? You’ve got to be kidding. God.”

From the creationist viewpoint, when God said, “Let there be light,” he had to make sure that the light from each of the galaxies was red-shifted just the right amount, and the intensity of light of the Cepheid variables was adjusted just the right amount, to make the universe look billions of years old. And he did so while keeping the light perfectly on track so that, to human observers using telescopes, the stars and galaxies look perfectly in focus—perfect enough for those astonishing images from the appropriately named Hubble Space Telescope. God could not just create a giant red filter; he had to adjust the red-shift from each individual galaxy (see cartoon on p. 57).

There is another possibility. According to Answers in Genesis, a notorious creationist organization, God might have created light that gets tired. That is, when God first made the universe, light traveled much, much, much faster than the speed of light. (According to Einstein’s relativity, the speed of light is a universal constant and is the fastest possible speed that anything can travel. Therefore, all post-Einstein physics must be wrong if Answers in Genesis is right.) But the light somehow got tired as it traveled, slowing down to the present slow rate of 186,000 miles per second. This tuckered-out light ended up with a red shift. Of course, this explanation has the same problems as the other: it has no scientific evidence and is not in Genesis. The creationist group that published this theory online should rename itself Answers Not in Genesis.

Creationists believe the Bible teaches that the whole universe is only a few thousand years old. The reason is, they say, that Genesis 1 says the creation took only six days. And to them this means six literal twenty-four-hour days. That is, Planet Earth days. Of course, the book of Genesis does not say this. In fact, other parts of the Bible use the word “day” (yom in Hebrew) in other ways. The creationists have chosen the twenty-four-hour-day interpretation, and they believe they cannot possibly be wrong. Their interpretation becomes inerrant. It is more likely that God altered all the light in the universe to make it look old than that maybe—just maybe—they interpreted Genesis incorrectly. Anything but that!

Perhaps the most amazing thing about the fake red-shifted light is that God did it not for the benefit of all human beings throughout history but for modern humans. Throughout human history, even during the first few centuries in which telescopes were available, nobody knew about the red shift or the big bang. God’s hard work was done solely for the benefit of humans who lived in the twentieth century and afterward—post-Hubble humans, that is. This blends nicely with the assumptions of many modern fundamentalists, who believe that we humans, right now, are living in the climactic End Times, when “signs in the heavens” tell us of Jesus’s imminent return and the coming of Armageddon and Judgment Day. In this view, we contemporary humans are the focus of God’s attention and have been so from the beginning of time. From the beginning of the universe, God planned for his hard work to be revealed to those of us who are alive today. We who are alive today are the most important people in history, they think.

In the next installment, we will explore how God created a beautiful, peaceful Earth and then turned it into a monstrous realm of disease and death. You just thought that a Christian god would have made a beautiful world, but according to creationists, God made it ugly.

Stanley Rice is professor of biological sciences at Southeastern Oklahoma State University and author of Life of Earth and, most recently, of Scientifically Thinking (Prometheus Books, 2018).


Editor’s Note: This is the first of an occasional series of articles on the “Creationist Funhouse.” Look into the night sky. Unless it is obscured by light pollution or clouds, you cannot help but be moved when you see the magnificence of the universe. A humanist would be in awe that we stardust humans are …